Y’know, when I dropped Re:Birth – The Lunatic Taker, I felt really elated. All of its constant preachy messages of what’s right and what’s wrong gave me a headache. They also had a tendency to overexaggerate faces and make text boxes become dark and spiky to emphasize their importance. Most of the words were capitalized, and boy, were there a lot of words in those text boxes. I couldn’t bear it.

So, it turns out that Shitsurakuen took notes, because it does the exact same thing and more. What do I think of Shitsurakuen? It’s right in the title.

One might wonder, “Kapodaco, why did you drop Re:Birth and not this, if this was worse?” Well, I’m trying to reach a deadline here. I’ve already dropped three titles thus far, and the moment where I wanted to drop this title was at the clear end of its run, so I figured I may as well put up with it to add as something that’s completed. And hey, I like having lots of 1’s in my list.

Something else to note about Shitsurakuen is that my comprehension of the story is very flawed because it made absolutely no sense to me. Then again, after a certain point, I kinda just stopped reading the text, because I was so fed up with it. If you’d like to immediately disregard my opinion of the story because I wasn’t able to comprehend how “deep” it was, and because I didn’t even try to understand it, by all means, disregard it. I wouldn’t blame you.

What one will immediately find with Shitsurakuen is the promise of something old, but new. A main character who takes it upon themselves to protect everyone they can, for the sake of justice, in a shounen-friendly environment. That’s the old. Here’s the new: the main character, and all the victims, are women. All the villains are men. How progressive, Japan! That’s very daring of you. Something like this is sure to cause some extra intrigue for those unfamiliar with the story.

Now, I don’t much care to get controversial, but I feel this needs to be addressed to some degree: whether your characters are male or female, straight or gay, black or white or blue or green; it doesn’t really matter. None of this actually really matters. If you’re going to make them act exactly like any other character cliche in existence, then what’s the point of doing so at all? The main character is female, but acts exactly like the blindly ambitious male hero stereotype that everyone is accustomed to.

Take for example, Samus Aran. If I were to take one of the most influential female figures in video game history and turn her into a man named Sam Aran, but have her act exactly the same as if she were still a woman, is that a new character? Is that something “new?” Would the quality of a story be better if I decided to make someone have a vagina as opposed to a penis? To a degree, yeah. However, I believe it’s to the extent of how I portray their gender, which in turn adds to the strength of their character, that better determines that extra quality.

In a nutshell, what the fuck is the benefit of having a female heroine if they’re just going to behave like their male counterpart? Just make the main character be male. It’s not like the story would be all that different regardless.

(Note that none of the controversial statements above was a major factor in my decision to despise this manga. It’s more just food for thought.)

Now then, back to the story of Shitsurakuen. It’s stupid. There’s an academy that exists for a mysterious reason where women are treated as slaves to men, who are treated superior in every way. The participants are involved in this sort of game where the women can make weapons out of their bodies or something, and they technically are the weapons, so they get hurt, too(?). It’s designed so that only men can enslave women to be their weapons for battling and what-not, but wouldn’t you know, the main heroine can enslave women, too! With this in mind, she decides that she’s going to defeat all the evil boys of the academy and save all the girls from being the victims! Hooray!

Okay, first off, where are the teachers? Who funds this? Who allows people to fund this? Who allows this sort of sexism to continue? Are they in a country who look down on women? Are they a country that promotes slavery? How many other countries know about this academy? Wouldn’t they try to do something about this? Or is this a religious thing, so they kinda can’t? How does the game even run? Who regulates the game? Why do people even join this academy? I’m pretty sure if women knew about how they would be treated here, they wouldn’t attend. Why can’t the women already attending just drop out? When does this story even take place? It seems like the future, but would the future really be this morally backwards? See, I enjoy logic in my stories, and this is kind of the most horribly explained set-up to a story I’ve ever read.

The rest of the story is even worse. They decide later on that the boys who run the academy are actually victims of a tradition or some shit, and they aren’t actually evil. And the heroine’s closest friend just teamed up with the leaders of the boys to create a game so that the heroine can look cool and only have eyes for her… or something? It’s like the most twisted way to appease one’s own controlling jealousy. The heroine’s closest friend basically recreates a slave society that treats her own gender like shit because she hates everyone except the main heroine, so she gives her special treatment and the ability to be happy by being able to save people from evildoers because that’s her character.

And then in the end, she and the main heroine get married and they live happily ever after.

At this point, do I really need to highlight the characters? Everyone is perfect and thinks of everyone else but themselves except the evil boys but then the evil boys turn out to be good guys to so no one in this manga is technically bad except maybe the heroine’s closest friend who created a “paradise” that consisted of enslaving women to be men’s tools so that she could have the heroine all to herself but everyone forgives her because who wouldn’t forgive her and everything is spring sunshine and fucking peachy oh my god my eyes are burning out of their sockets can someone please call an ambulance for me???

The art consists of people making the same stupid “I’m happy, sad, or deranged based on the situation,” face that everyone has been accustomed to for the last eight hundred years or so. There are moments in Shitsurakuen when the faces are trying way too hard to be twisted and unique, but it kinda just comes off as cheesy because the situation really isn’t as deep as it wants you to think it is. This goes double for the appearance of the text boxes and the words within them. Let me provide a perfect example: 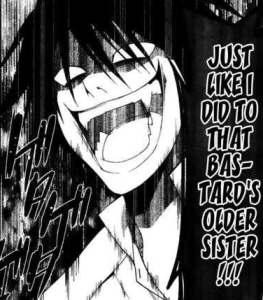 Aaaaargh. Look how evil I am. Look at how black and indented my words are. Look at my use of exclamation points!!! Look at my jagged teeth. My pupil-less eyes. The creepy-looking sound effects to the left of my face. The striking lines within the picture. The shadow that covers my face above my nose. I am the definition of wicked and I am the most insane-o person on the whole planet. I can never be saved! Mwahahahahahaha!!!

The heroine thanks him for protecting one of the other characters and he becomes sane.

That’s another thing this manga like to do: build up to something BIG and IMPORTANT, and then they reveal it and it’s like, “That’s it?” I mean, you can’t top the lengths that the heroine’s closest friend was willing to go to to keep her from leaving, but other than that, it was pretty tame. Not that I much cared, anyway, as I was basically just skimming lines and laughing at their stupid faces about two-thirds of the way through the story, but I digress.