A long time ago, I was a high school freshman. A naive little boy with an obscene curiosity . At this time, I made one of my longest-standing friends in a girl named Emilly. This friend introduced me to a particular book that played with and satiated my obscene curiosity for what I could not have. This book was titled Flowers in the Attic.

For those unaware, Flowers in the Attic is a book about four siblings, along with their mother, who move into their grandmother’s prestigious estate after unforeseen circumstances force them to leave their own home. Unfortunately for the four kids, dark secrets lie in wait behind the walls of the home their mother grew up in. Secrets that could alter the way life continues for each and all of them. Oh, and the grandmother locks all the kids in the attic and basically keeps them hostage. Hence the name, Flowers in the Attic.

Sakura-gari reminded me of Flowers in the Attic from the very first chapter. The time period is similar, the main character is placed in a rich home that is unlike what they’re used to, and not everything is what it seems. It just takes time to unravel the mystery behind it. Not to mention, the subject matter and plot devices are also similar. Similarly dark and horrifying. It allowed me to remember back to those days when I would take every opportunity to continue reading Flowers in the Attic, whether it be between classes, at home, or fending off fatigue. And it didn’t stop there. I read almost every sequel. I couldn’t get enough.

Fast forward six or so years later, I’m confronted with a story that is reminiscent of V.C. Andrew’s, the author of Flowers, style of story-telling. Was it my curiosity for the dark events that took place in Flowers that led me to continue the series? Or was it simply a very well-woven story? If Sakura-gari is any indication, it’s both. 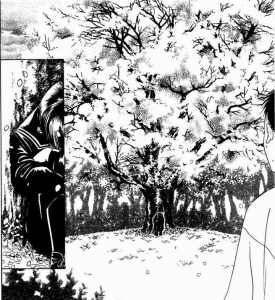 When Sakura-gari began, I didn’t think much of it. It opened the way many others have. Monologues laced with foreshadowing and images important to the story later on. Yeah, yeah. We get it. As it continued, it still didn’t impress me. The characters were interesting, but not entirely relatable. The art wasn’t breathtaking. To a degree, the amount of saddening events that had happened to the central characters almost came off as an excuse. The only charm that allowed me to continue was intrigue. The promise of a story that would get better with time was all I had to look forward to. And it did.

With time, the story began to reveal the secrets hidden behind the ominous text that began the story. It gave new life to characters that appeared flat on the surface. Through both their words and their actions, they became two dimensional.

One thing that bothered me, however, was this story’s insistence on modeling. It seemed as though every character simply acts in accordance to how they were treated in their past. Such is the case of Souma, one tragic hero of this story, and heir to the fortune that his father holds. His past is ravaged with traumatizing events that destroyed his psyche over time. Because of this, the story is angled in a way where the reader is supposed to empathize with his pain, and to forgive him for his actions, because he doesn’t know anything different. Almost as if he were a baby, or a pet. Monkey see, monkey do. This, in turn, makes the character more likable out of pity rather than genuine relatability. It improves the quality of the story for the sake of a character’s humanity.

Note that I used “two-dimensional” above, as opposed to “three-dimensional.”

Speaking of characters used to make the story look better, there are also a few characters who only serve the purpose of making the major characters appear more tragic in comparison. It seems almost like burying someone alive, with each character representing a new clump of dirt used to mask the major characters underneath their beings. Over and over and over, until they can firmly establish that their actions are due to their environment, and they shouldn’t be blamed for their sickened state. I think that may be my biggest problem with this story; no one other than Masataka, the boy who was trapped himself within the story taking place, feels entirely human. No one but him feels as though they’ve grown by story’s end. Feels as though their decisions were based on their instincts as opposed to their upbringing. However, there was the underlying message that Souma and his family were nothing but a bunch of dolls, incapable of growing or showing emotions, so perhaps that was intentional. Regardless, it didn’t do much from a subjective standpoint. At least in my case.

I could nitpick further by stating how overexaggerated some of the plot devices felt, but I’ve already established the more major issues. In the end, the story is one to be praised. Not only do the events that take place feel realistic, but they also serve a point. Sakura-gari knows how to tell a story, even if it had to sacrifice the sanity of their characters to do so. It takes its time to let things show, and lets the aftereffects simmer and steam. Sakura-gari isn’t a story that will enthrall you with character development. It’s a story of intrigue, something with which was promised from the very beginning. You turn the pages because you want to know what happens next. It’s excellently paced. It’s riveting. The themes are tremendously dark, but not to the point of becoming a spectacle. It feels serious… most of the time.

One other positive to note is the art. I mentioned above that it wasn’t anything grand. However, that’s what I enjoy about the art. It doesn’t distract you with a pretty picture. Nothing about this story is pretty. Except maybe the characters’ faces. It helps the focus remain on the story and the characters’ actions. What little the story does in terms of character development, it shows with character expressions. Fear. Trauma. Breaking. The mood is heightened by the attention given to showcasing genuine emotion of the strongest kind. By the end of the story, a real smile becomes almost like a gift from the gods. Contrast and mood are very well established by the art style. Not much else, though.

Perhaps if I were still a fifteen year-old , I would gobble up this story like I did with V.C. Andrews’ works. With the time that’s passed and the experiences I have, it still comes off as an entertaining read, though not something that tugs at the heart strings. If the characters felt more like people as opposed to chess pieces, I may have felt more from their struggles. But it was a necessary evil, as this type of story, especially one this short in length, only did what was necessary to capitalize on its themes and ambitions. I don’t blame Sakura-gari for taking the direction that it did. Nevertheless, its flaws still shown in the darkness within the story’s words.