I could go on about how Pixar is such a legendary animation studio and everything they release is an undeniable masterpiece, but let’s get real here: Pixar’s movies have been slacking lately. Their shtick is starting to wear them down (at least to some critics) and are showing how little they know of storytelling. For a more in-depth analysis on this, I would recommend watching YourMovieSucks’ Inside Out review, but that’s all I’m going to mention outside of my own thoughts.

There’s a lot to say about The Good Dinosaur, with not a lot of leeway to discuss it without spoiling the whole movie. To say it’s a lot like other Pixar movies would be an understatement. In essence, it’s almost entirely a re-hash of other Pixar movies, except with dinosaurs. Who doesn’t love dinosaurs though? Jurassic Park’s pretty cool, right?

The story follows Arlo, a cowardly dinosaur among a family of five, who slips into a journey of self-discovery and self-improvement with help from a wild little human kid named Spot. Now again, the details through which this journey begins is surrounded by spoiler traps. That being said, I’m forced to be vague about both the synopsis and key details within the film. Nevertheless, I’ll do what I can to make the film clear. 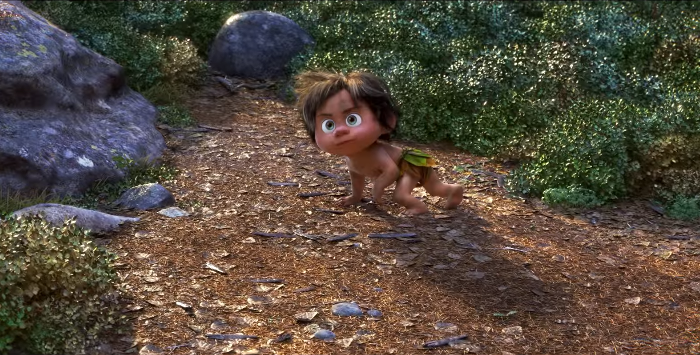 To begin, The Good Dinosaur is at fault for, as said above, being almost a carbon copy of most other Pixar films. Because of this, the events and situations that arise within the movie become increasingly predictable. I recall pointing out conflicts before they happened. So and so does this. Something happens to this person. These characters aren’t what they seem. It’s all too easy with this film, so long as the viewer is familiar with Pixar’s works. When you’ve seen a few, you’ve seen ’em all. And when things become predictable, the suspense, the drama, the build-up; they all become for naught. The aura of mystery no longer applies, cutting out any sort of emotional immersion the viewer could have with the story-telling.

There are also issues with logic present in this film that are notable even to the untrained eye. These are present with the characters, their actions, and the situations that occur around them. Some of these are spoiler territory (which is a shame, because some big ones become void), so I can only assure you that the examples I’m about to provide are not all of the issues I had.  One such thing is the durability of the characters. Arlo and Spot seem to have superior strength and endurance, as they survive falling off of cliffs, rolling down steep hills, being caught in a cyclone, and falling down a waterfall. Not to mention, Spot looks to be maybe six to seven years old, yet has more flexibility than most gymnasts in their twenties. One could say that the time period allowed human beings to better improve their primal instincts, but does that also entail Spot acting (and being aptly named) like a dog? Comic relief aside, it’s still odd to me.

Somewhat of a sidenote and a little more of a nitpick, but why can the dinosaurs speak English and the humans can’t? Why can Spot understand Arlo and everyone else who speaks English, but can’t speak it himself? Not even other humans can speak English. They just howl and make animal noises. This is another one of those Pixar clichés; have the unexpected expected. Humans act like dinosaurs and dinosaurs act like humans. Ha ha ha.

Another leap in logic, along with an overused predictor of events to come, is the weather. I mentioned above that a cyclone takes place during the course of the movie, but that was only one such event. Every time something bad is happening, or is going to happen, the weather suddenly becomes stormy. Every time. And when the mood clears or the situation is resolved, the weather clears up. Every time. It rains about eight times throughout the course of the film. My brother couldn’t help commenting “Man, it sure does rain a lot in this movie.” Continuing on from above, this makes the movie all too predictable and hurts any suspense that may have led up to a certain scene or outcome. Sure, it helps the mood, but repetition rides out the charm of a stormy conflict after a while. 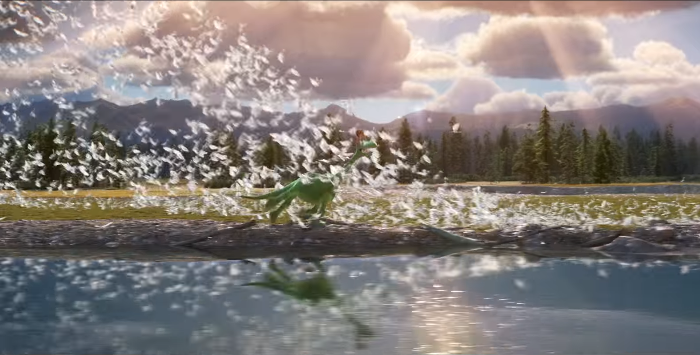 When thinking of the characters in this film, I can’t help but feel they’re the worst aspect overall. Cliches and predictability aside, if this was a viewer’s first Pixar film, the events could be somewhat excusable. What isn’t excusable are the characters and their impact on the viewer’s mind. Arlo and Spot are the only two characters in this film who get any semblance of development, and even then it’s non-impressive, considering the uproariously lame state these two central characters were in at the beginning of the movie.

Arlo is a coward, a weakling, and can’t seem to do a simple chore with ease. He is one of the easiest characters to develop in any story ever. Make him do something that is outside of being completely useless. He’s developed. Congratulations. Spot is a tad better, but still uninspiring. Spot is regarded as a “critter” at the beginning of the movie by Arlo’s father and a few other predatory creatures. He is the very definition of a wild animal, complete by his lack of a humanistic language and his predator-like movements and actions. The viewers also know next to nothing about him. So, in essence, the movie is developing a wild animal, much like developing the relationship between its pet and its owner. But he’s human, and that’s the dead giveaway. Of course he’s going to act like a human in key moments. He’s human. Have him act like a human. He’s developed. Congratulations. It’s predictable and it’s overly simple, but it’s development nonetheless.

The rest of the characters, aside from a few redneck-stereotyped tyrannosaurs, are ultimately forgettable, save Arlo’s father. Longtime readers of mine know what I mean when I say that a majority of the characters in this film are plot progressers: characters who only act, react, and behave in order to further the plot. Arlo’s siblings act as reminders that he’s worthless compared to them. Arlo’s parents (or mother specifically) are worried for Arlo’s development. Some weird triceratops guy acts weird and dumb in order to uncover Spot’s name and comic relief. Some evil pterodactyls later on are evil because they’re evil and where would the conflict be without randomly evil characters? Sure, some of Pixar’s other films had evil characters evil for a reason, but here, they’re just insane and/or stupid. Great. The cast is pretty forgettable overall, which is a shame, because I actually liked those tyrannosaurs, who had about fifteen minutes of screentime only to aid the main characters.

Visually, I have no complaints about this film. Most of the standard critic reviews had a mandatory “This film’s animation was God-like!” note attached to their overviews, and for good reason. The animation and overall design of The Good Dinosaur is really spectacular. The animation alone is enough to keep anyone fully immersed, even if the narrative will bore the thinking crowd. The only complaint I could give was that while the landscape looked realistic, the characters didn’t match that same authentic look. It’s like putting  Pac-Man into Call of Duty, it feels a little out of place. Though, this doesn’t hamper much about the overall quality of the film, but is something to note before going into it.

There’s something tricky about critiquing a film based on outside sources. Would this movie be as good if its narrative wasn’t already an established Pixar trope? Perhaps. But that aside, the movie still suffers from lack of effort in character-building, world-building, and logical scenarios. Predictability is one thing, but defying the laws of physics and overexerting the capabilities of animals is another. The Good Dinosaur is a cute film, and many will be willing to overlook its flaws, but those in the know can easily point the path through which the characters will travel, as well as when Pixar will try to squeeze the tears out of you. Just like in most of their other movies, especially recently. It’s a fun time-waster and great eye candy, but those looking for a modern Pixar masterpiece should skip this film.