What do you call an anime that replaces multiple characters from real life events with cute, teenage girls with different body types and hair colors?

But aside from the inevitable appeal this series may have for the traveling anime connoisseur, there’s a lot more to it than meets the eye. Oda Nobuna is an anime about a guy who gets thrown back in time to a different dimension to assist Oda Nobuna, based on the real life Oda Nobunaga, with uniting Japan and fighting off all who seek to defeat her. It’s one of those anime that simply throw you into the action without explanation. No, this anime never explains how he was transported to this time, only that he’s now there.

To save you from the suspense, this anime is really bad. To give it credit, though, it didn’t start off bad. It was cliché and gimmick-y, sure, but the characters established weren’t completely unlikable. The animation for this show is also commendable for the time period. However, good animation for a show containing 300 female characters under the age of seventeen is almost standard now-a-days. The story was also engrossing when it decided to change up the one positive benefit of having the male lead in the show. 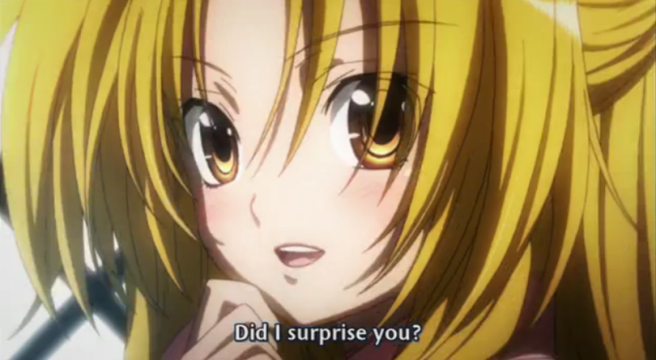 The male lead, who everyone affectionately (or not) refers to as “Monkey,” is a random kid from the future who knows everything there is to know about Oda Nobunaga. He’s played all sorts of games based on him, read history books about him, and knows everything about his history almost as much as I know about bad anime. For the first few episodes of the series, he is able to accurately predict all of the events that will happen to Nobuna before they happen, and aids them within their battles with tactics and strategies. Knowing this, I loathed the anime. I thought to myself, “Oh, great. An anime where some asshole knows everything and destroys any tension or suspense by using his OP-ness to escape out of anything.” However, after episode four (I believe), it is revealed that the dimension that he traveled to was altered before he ever stepped foot in it. This is both good and bad for the series. It creates tension and suspense by knowing that not all characters are necessarily safe anymore under the watchful eye of Monkey’s OP-ness, but also creates the question: why are all of the events prior to learning that history was altered still the same? Coincidence? Yes? No? It also makes Monkey useless, as he didn’t really know anything else other than “Standard yelling about friendship and togetherness” that all the women fall for because this is anime. Blech.

Despite this, the anime became engrossing again simply because there were no guarantees. Things happened that were beyond the characters’ control and it gave them a chance to create tension and build-up.

Aaaaaaaand they ruined it.

As the show progressed, it became more and more convoluted and ridiculous. It already had instances of logic-bending throughout, but it wasn’t until over halfway into the series where the series really said “Fuck it.” Shadow ninjas that could mend into thin air and teleport. People with the ability to “read people’s hearts just by touching them.” Using sparkly butterflies to paralyze people. Getting into a cooking competition to raise money as part of an ultimatum to elect a shogun. Using the Full Metal Alchemist logo to summon elemental forces such as fire and rain and whatever else. Bombs that look like real bombs but are actually shadow bombs that can spew out limbs that look exactly like certain people’s body parts to divert enemies’ attention. Being cold after being hidden underground in a warm atmosphere for some amount of hours and needing the warmth of a cute, teenage girl with a peculiar hair color’s naked body to get you out of a coma. Nobody dies except the bad guys. Need I go on?

It’s this sort of “logic” and damning of the rules of anything realistic that make this series ultimately fan service incarnate. It’s the same pretty but hollow bullshit that litters the vast library of anime that gives the medium a bad name. The characters are horribly archetyped. The story is nonsense. And the animation is pretty good. There is nothing really “realistic” about this anime and that’s it’s biggest flaw. Typically one wouldn’t much care for realism in a fantasy anime, but this is an anime that only gives the impression that it’s a re-telling of Oda Nobunaga’s conquest except every major character is replaced with a cute girl. It gives the impression that it’s going to be fair-minded and down to earth about its setting and plot progression. Nope. Instead we have mages and shadow ninjas and wars being fought by women with big, bouncy tits hidden behind “armor” that conveniently bounces along with it. This only brings questions as to why the more realistic things weren’t tossed aside for the more magical aspects. Who gives a shit about rifles when you have shadow ninja that could guerrilla warfare the fuck out of everybody? What about the spellcasters that can shoot people with fire? Why is this never considered by anyone aside from, like, two people? It’s just stupid. This entire anime is so stupid.

Was it enjoyable? To an extent. I can give it credit for making me so outraged by its decisions to make me curious enough to continue through the shitshow. It also, as I’ve said a few times, has very smooth detail with its design and animation. Most of it is used on subtle fan service, sure, but that doesn’t mean I don’t appreciate the fact it was subtle… most of the time. The characters were nice to look at and so was the scenery. That, and some guilty enjoyment, are really the only things I can give Oda Nobuna credit for, because the rest of it reeks of fan service and rushed cash-ins.

One thought on “Thoughts on Oda Nobuna no Yabou (Spoilers)”