Yesterday was the premiere finale of Volume Three of RWBY. Lots of people on Twitter were eager to gobble up the supposed “darker storyline” that Volume Three had to offer, which made me curious enough to revisit the story of a group of colorful cuties from where I had left off at the end of Volume One. I can’t believe I just typed “colorful cuties.”

A lot of the issues I had with Volume One resulted from scattered character development, lack of any coherent story to follow, and the mindless dribble they called “dialogue.” With the foundation behind RWBY and its limited resources behind it, I was able to excuse it to some degree, but with more time and more hype behind Volume Two, I went into it expecting them to shore up something more grounded to keep the viewers engaged. I was not disappointed.

RWBY Volume Two opens with two new characters. Said characters go into a library and kill some werewolf guy because reasons. This transitions us back to our main group (or two) of heroes that we came to know from Volume One… leading into a food fight. The match ends after a lot of flare and we transition back to the two characters shown at the start talking sinister and saturday morning cartoon-like to a returning baddie and a new baddie, setting the stage for what Volume Two aims to build up to.

I was both relieved and hesitant. RWBY’s first volume was aimless and basically just a testament for things to come and to showcase flashy visuals. Right out of the gate, Volume Two shows that it wants to focus more on storytelling than anything else, whether it be towards the overall plot or through characters. But at the same time, the story being told is a tired and disappointingly benign one. Bad guys are bad and good guys are good. There is a threat that suddenly appears and two entities are fighting over how to combat it; whether it be through building an army or continue with the status quo. By the end of the series, nothing about the story is really settled, with the entirety of Volume Two, somewhat similarly to Volume One, being simply a build-up to something more. 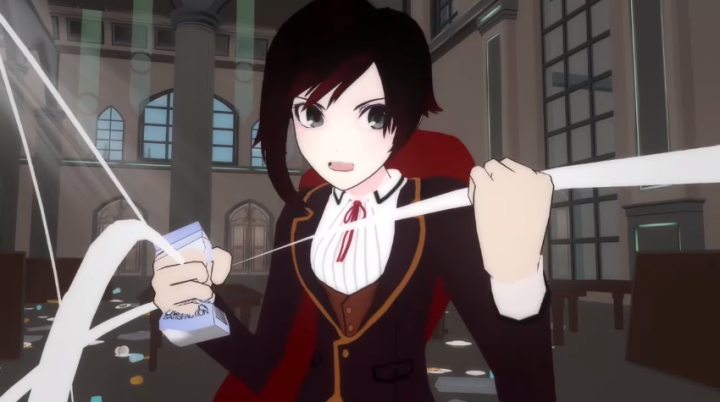 Now, don’t confuse the story itself with storytelling, which are two separate entities of criticism. The story itself is safe and awfully vague, but the storytelling has some props to it. Volume Two has a way of pulling you in and making you curious. The use of foreshadowing and build-up through character exposition or plot progression is something to be admired, rather the effort in using it anyway. There was never a time throughout watching Volume Two when I wasn’t interested in knowing what was going on. If the vagueness of the overall plot successfully does one thing, it’s to stabilize interest. This air of mystery is something Volume One had little of, relying only on underdeveloped characters and their humor. At least Volume Two has something to fall back on.

At this point I’m reiterating, but Volume Two returns with its action-packed style of almost absurd proportions of choreographed fight scenes and bedazzlement. The action is an absolute plus to watch and it certainly does get the feeling of “Hype” going through when necessary. However, I feel as though Volume Two relies a little too much on these scenes. There were times when it felt exciting to watch because there was a sort of substance and emotional empathy attached, while others were simply to “look cool.” As a viewer, it made me wonder if Volume Two wasn’t confident enough with itself to hold attention by character interaction and exposition alone, so it decided to jingle keys incessantly to keep those watching awake. It’s certainly nothing to hamper for choreography, but the reason behind the action scenes this time around made me wonder.

The overall design of the show hasn’t changed much from Volume One, though perhaps more polished here and there. The animation has gotten noticeably faster with trivial movements and pragmatic activities, which is nice because Volume One was super clunky in that regard. The overall quality of action scenes was roughly the same, with perhaps a few more “WTF” moments sprinkled here and there. It’s superior, but perhaps not to those trained to look for it.

I’ve spent quite a bit of time being overall positive with this review, but now we get into the sweeter spot of the symbolic piece of pie. Where Volume Two exceeds in roping in the viewer with a base story, it lacks for overall character spotlight. This volume shows far less of the large cast of characters than the first volume, which is a bit of a shame. Ironically enough, characters with far more development in the first volume (Weiss, Jaune) get far less development in this volume. It’s almost to the point where they’re all but ignored (especially with Jaune) for the sake of other characters. A few that come to mind who get a lot of screentime here are Yang (who desperately needed it) and Blake (who already had quite a bit). But even so, the amount of time spent with these two almost entirely eclipse those otherwise. Ruby in particular (along with Nora and Ren, who weren’t really focused on in Volume One either) seems to get the short end of the stick in terms of development. She’s there to serve as the good guy… or gal. That’s pretty much it. If this was all we had in terms of content, I would not pick out Ruby as “the main character.”

There’s also the issue that seems to plague RWBY in its entirety: character number. Aside from the two new baddies mentioned before, there is another new baddie and two new goodies. RWBY keeps adding new characters in an attempt to flesh them out and it simply falls flat! Why do you keep adding new characters?! Mold the ones already there! What’s even worse is that these new character are all horribly personified. The bad guys are bad guys. Arrogant, whiny, sinister, uninteresting. And then there’s Neptune, some hipster, cool-dude, blue-haired fuck who comes out of nowhere and serves nothing to anything. His personality is dumb, his mindset is dumb, and he’s basically a walking plot device used for the middle of the story. He has no potential and he has no point. Wasted. Character space. Despite this, he’s used for quite a few jokes and even as a love interest of all things. And for what? Blue hair? C’mon, RWBY. You’re better than that. 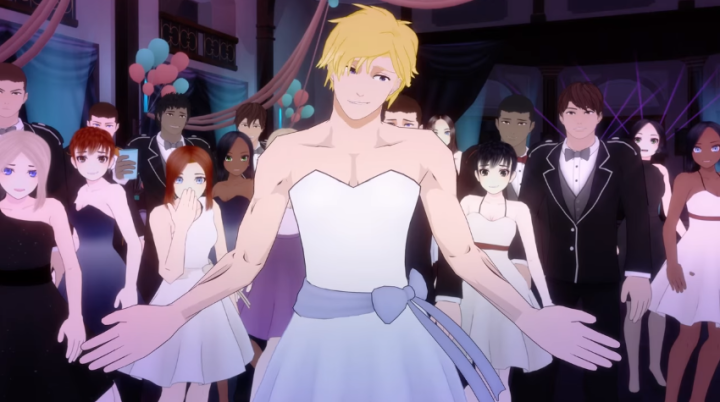 Something I never cared for comes back in full force for Volume Two: comedy. Let me be clear and stout: the comedy in RWBY is dumb. It is unfunny, juvenile, and almost never clever. It’s just jokes thrown in for the sake of jokes. Undertale enthusiasts would probably get a kick out of the corniness of it all, but I’m no Undertale enthusiast. But it’s not the jokes itself, but the timing of the jokes. RWBY has a knack for killing any mood with a corny joke thrown in. If the mood of a scene is stupid, fine. Throw in a joke. The food fight in episode one is entirely plausible for jokes. But when you’re fighting in a life or death scenario, why do it? It just feels like those movies that rely way too much on action and cheesy one-liners and—Oh. Huh. Nevertheless, it makes the entire thing feel like it doesn’t give a shit. I was curious to see how far they’d take this, but then someone used a normal dog as a flaming projectile and at that point I said to myself, “They don’t give one fuck.”

It’s nice to see RWBY taking strides with more experience under their belt, but I also feel they’re trying too hard to appeal to everyone. Dark and foreshadowed plots don’t exactly mix well with goofy humor and exaggerated character banter. It’s almost to the point of parody the way this show comes across, especially with its action scenes. Everyone is overpowered as fuck and each character is motivated by a shounen cliché or other fantasy-themed plots. I think Volume Two is a step up from Volume One, but not by much. It’s a dazzling watch and holds its own against its competition, but it’s hard to see it as anything more than that: a dazzling, hollow performance trying too hard to be everything for everyone.

Oh, and Happy Valentine’s Day everyone!