There’s something about this game that divides the Metroid fanbase. A lot of people criticize this game for being linear, for being told to follow orders and being shown exactly where to go. To go from point A to point B. They complain that this isn’t what Metroid is supposed to be. This isn’t following the formula that made the immersive, atmospheric, and grim exploration games from previous Metroid games so great. While these criticisms have a validity to them, one has to wonder if it really matters? If a Metroid game doesn’t follow this exact formula, does it deserve the flak that it normally receives? In short, yes and no.

Some fans will cite this game as the most linear and basic of the Metroid games, especially within the earlier years of the series’ life. However, I would argue that Zero Mission is much more guilty of the “point A to point B” criticisms that Fusion is used to receiving; Zero Mission just doesn’t have any story to go along with it. I believe the difference with Fusion is that the linear style of the plot is excusable for the sake of context. Samus Aran is now working directly with The Galactic Federation. She is taking orders like one would take orders from a superior. This in of itself rubs some Metroid fans the wrong way because she’s supposed to be a bounty hunter, a lone wolf lookin’ for trouble. She shouldn’t be working under someone! She does whatever she cares to. She even says in-game that she despises taking orders. So… why even willingly choose to work under them? Plotholes from within the context aside, she is now working under superiors, so the “point A to point B” plotline makes sense. I don’t see it as that much of an issue with the game itself but more of an issue with the background of Samus as a character and the player’s interpretation of her background.

The game itself has some of the most dialogue in a Metroid game up until Metroid: Other M, which is an entity all on its own. It has its own backstory, its own cast of characters aside from Samus, and genuine story development. Some may shrug aside the story of Fusion due to their own dismay with how the story is set to begin with, but I found the story to be both objectively and subjectively engaging. I can even go as far as to say that I believe Fusion has the best attempt at an actual plot of any game in the series. However, that would insinuate that the Metroid series actually tries to develop a plot aside from “Bad guy is causing a ruckus. Good guy must stop them.” What this game lays on top of this is an air of mystery, suspense, and fear. If you’ve read my Zero Mission review, you’d know that my favorite part of the game is the end of it, when you’re left defenseless in a foreign territory, trying to avoid enemy detection. Fusion incorporates something similar, except the player isn’t entirely defenseless, but is hunted by a creature far more powerful than her starting state. It’s only a shame that all of these encounters with the “SA-X,” a creature with all of Samus’s latent abilities, are scripted and hardly a part of the game. 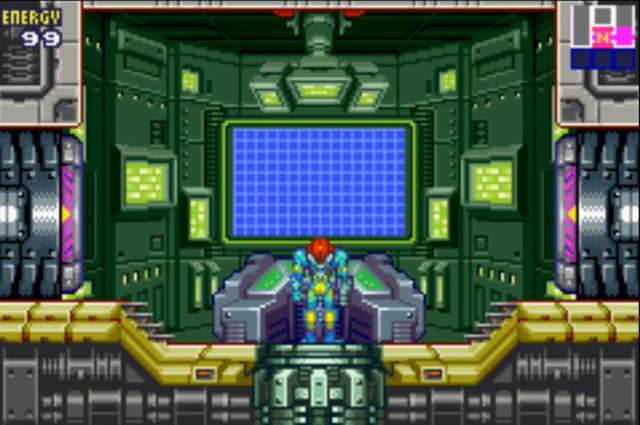 I enjoyed the overall use of deception, ulterior motives, and mystery quirks the plot incorporates into the game. This kind of thing makes the story more impactful and more memorable in the long run. It makes it feel less stale, especially when considering other Metroid titles’ stories are either vague or outright basic. I thoroughly enjoyed the hoops I had to go through and the way the environment and this unknown, new threat that my “superiors” had little knowledge of acted as an accessory to the plot. However, if there is one thing about the story I didn’t care for is how it ended. It screams “Japanese incorporating miracles through emotional bullshit.” The way they painted Samus through inner monologues was okay for the most part, but when she starts making smart remarks about whether or not she can trust a computer and criticizing it for not being able to understand something from an empathetic viewpoint, it’s just dumb. Samus, it’s a computer. A computer does not have a personality. It does not have feelings. It does not have ulterior motives. It’s a computer. You’re being a little too judgmental. Except the computer takes on the personality of someone she once worked under named Adam Malkovich out of nowhere because why not and that entire theory suddenly makes sense… but feels incredibly forced and dumb. God damn.

Metroid Fusion, like Metroid: Zero Mission, is a very short game. It took me two hours and thirty-six minutes to complete Zero Mission with a 74% item collection rate. It took me two hours and twenty-four minutes to complete Fusion with a 68% item collection rate. Once again, this game was $25-30 retail cost, which is a horrible gameplay to cost ratio. This also makes the game feel too quick in a sense. The player can’t really fully enjoy the experience of playing the game due to how little content there really is, on top of the amount of dialogue present in this game. The game seems to end in a snap, with one or two sessions with the game being enough to go from beginning to end, depending on how good the player is at the game.

The difficulty of the game is just right for my tastes. A lot of the enemies are susceptible to normal weapon fire, but there’s a distinct addition of enemies that need to be defeated in specific ways, along with enemies that have different forms of attack and travel. I enjoyed the amount of obstacles that required different weapons to advance aside from item-specific blocks in the wall. The bosses are a tad too “wait for the weak spot” for my tastes, but are otherwise enjoyable to go up against. Some enemies hurt like hell upon touching, too, so the player can’t be too careless when demolishing through a certain room. It gives a sense of strategizing when it comes to certain enemies and obstacles, rather than just run, jump, and shoot. I feel like there was a lot more effort put into making this game competitively fun in comparison to Zero Mission. 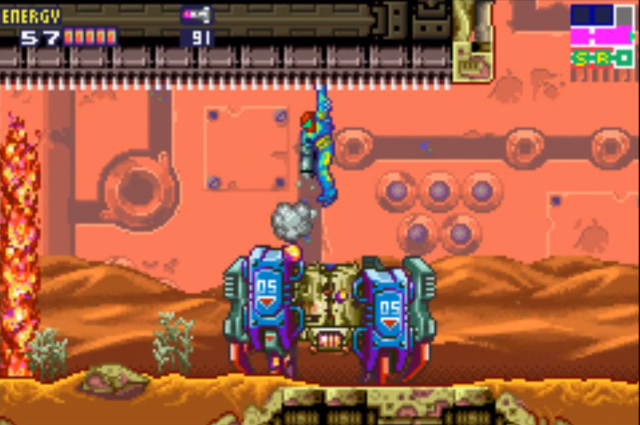 I forgot to mention, but the enemies in this game are parasites called “X” that take the host of whoever (or whatever) they absorb themselves into. These things can take form of virtually any living thing, including manifesting themselves into a giant figment of slimey, veiny goop. Due to story elements, Samus has the ability to absorb these parasites safely, which recover health and item quantities. Each enemy defeated will have at least one of these parasites float out of it, for Samus to absorb (so long as she can catch it). They are shown to be intelligent, too, so it gives more weight to killing and absorbing these creatures, as they’re trying just as hard to kill Samus. It’s not like on Tallon IV or Planet Zebes where the creatures were simply acting out of self-defense. These parasites are actively seeking to kill Samus. Add to the fear factor.

What may be another controversial statement in a series of controversial statements I’ve made throughout the review comes in the form of Fusion’s music. I love the music to this game, and would argue that it suits the game’s overall theme of fear and isolation better than any game in the series. It’s almost totally atmospheric, which hampers its overall memorability and/or quality, but makes the story and imagery present in the game more memorable instead. I really enjoy the way the music incorporates itself to make the plot, the mood, and the immersion all the better, but without all of that, it may be a tad uninspired overall. It’s not the kind of music one can hum to, one can turn on to have a rockin’ good time, but it’s all the better in addition to the environment its placed in. This is a standard for most Metroid games, but I feel Fusion does it masterfully.

Visually, Fusion is very similar to Zero Mission. I think the latter is more memorable by design and the areas it provides are brim with color and flare. Fusion, by default, is darker, more grim in overall tone, so the visuals give off a more serious, grayer tone. I also feel that some areas in the game (Sectors 2, 4 (underwater area), 5, and 6) are more interesting to look at than others (Sectors 1, 3, and the main station). I also both like and dislike the whole “areas are differentiated by natural elements.” Yeah, it’s cliché to have a grass area and a water area and a fire area, but I also like the way it all feels like one big world. I would have more of an issue with this if it were hard/slow to travel from place to place, but the areas in general are small enough to not feel overwhelming, and Samus is fast and functional enough to make traveling an afterthought (especially after acquiring Space Jump Boots). Samus’s new “Fusion Suit” looks fine altogether, but I don’t care for the visor. It looks like a frog’s foot. It’s weird.

One more comparison to Zero Mission: I like how it varied up the objective. Zero Mission is literally just going from place to place collecting items and fighting bosses. That’s it. Fusion has you collecting items, fighting bosses, racing against the clock (twice), going rogue, using stealth to avoid the SA-X, and reacting to the snags that the X Parasites try to use against Samus to deter her advance. It just feels to me that the game has more of a point to its action, that Samus has more motivation to upgrade as much as she possibly can, knowing that there is something far more powerful than she hunting her at every turn. There’s more to do in this game than other Metroid titles, and while this may turn off some, it’s wholly welcome in my eyes, even if it doesn’t fit the Metroid narrative.

This game genuinely frightened me as a child. The first time seeing the SA-X revealed up close was something I would avoid seeing to secure myself a good night’s sleep. This game is still haunting today, even knowing how to maneuver through all of the scripted events and the motivation behind Samus’s superiors. The brooding atmosphere and the isolating effect of being hunted by something far more powerful is enough to make this game all the more enjoyable for me. The gameplay is fun, but standard, with the environment taking on the same description. The game is disappointingly short, which is probably the biggest issue this game has, if one can look past the context to Samus’s entire origin. But is that context enough to ruin the game? I wouldn’t say so. Metroid Fusion is too fun and too emotionally manipulative for me to shrug it aside because it may paint Samus and the Metroid franchise as a whole as too uniform or stereotypical. However, I do empathize with those of that mindset. Metroid Fusion marked the beginning of the end for Samus Aran, a character that becomes all the more dislikable with Nintendo’s every attempt at showing her more “human side.”

(All gameplay screenshots courtesy once again of SaikyoMog.)

One thought on “Metroid Fusion Review”