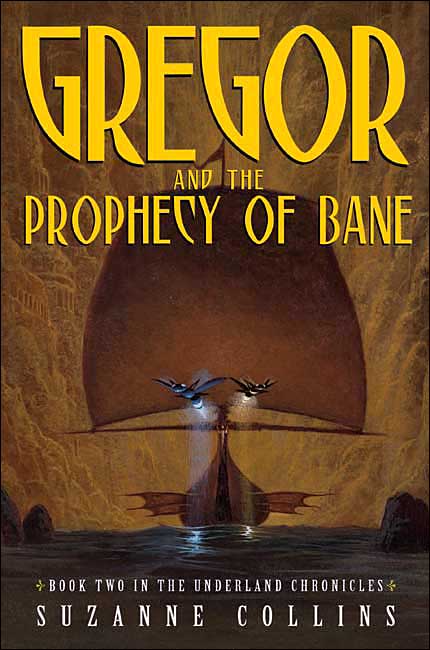 I considered not reviewing this simply for the sake of avoiding repetition, as this book is almost entirely the same as its predecessor. However, I feel I should review every book in the series as it is, perhaps for lack of experience, my favorite book series. That being the case, a lot of what I’m going to talk about are summarized versions of what I already stated in my review of the first book, so if you find yourself wanting more clarity on the points I bring up, go read that one.

Prophecy of Bane leaves off a month or two after the events of the first book, with Gregor and his family coping with <first novel spoilers>. At some point (about twenty or so pages in), Gregor takes his sister, Boots, out to a park to go sledding in the winter snow. He drifts off into deep thought until he realizes the sun is setting, then calls for Boots to go home. The only problem is, she’s nowhere to be found. This triggers a series of events that lead Gregor back into the Underland, and much to his horror, there is a new prophecy that he’s destined to be a part of.

Right off the bat (ha), one can look at this plot and look at the plot for the first book and go “Oh. These are pretty similar.” I’ve got news for you: most books in the Underland Chronicles are the same. Gregor gets dragged to the Underland through one way or another, he finds out a prophecy tells him he has to go on an adventure, he goes on an adventure, he comes back, then realizes his work isn’t finished with the Underland, whether through another prophecy, the people outright telling him, etc. It’s somewhat like Super Mario Bros., except in novel form and the endings aren’t always happy. This in of itself is an issue for people (like me) who enjoy a variety of things from a particular series. Through Gregor’s case, one can say that the experience makes up for the lackluster storyline, but even so, it’s not always a great experience.

One of the things that the Underland Chronicles does well is provide new issues that follow Gregor throughout the series as a whole, as well as pace them well enough so that they work in terms of foreshadowing. Prophecy of Bane has a wide variety of these issues, such as echolocation, a “Rager” sense, and the identity of the Bane itself. Normally I wouldn’t speak of any of these issues in a review as they are technically spoilers, but the “Rager” sense is an issue with this novel I must discuss, but more on that later. There’s something about the incorporation of these seeded issues that make Prophecy of Bane more enjoyable, and give further interest to later editions of the series. In a sense, Prophecy of Bane is a more intriguing and better shrouded in mystery, while the first book was more about simply showing what the Underland and its denizens strive for. “The set-up,” if you will.

A crucial part of each story in the Underland Chronicles is the adventure Gregor and his comrades set forth upon. Much like the Super Mario Bros. analogy, the adventures tend to re-enact in almost the same way in each title. The humans shove off to fulfill the terms of a prophecy, with a number of returning and new characters making the trip, including, but not limited to, humans, rats, roaches, and bats. They run into one or two key issues during the trek, that may or may not injure/kill a few of the members of the group, leading the rest to either move on slower or have them be sent back to safety, with Gregor feeling bad about how useless he is. All of this leads up to some crucial moment where Gregor’s decision/realization could change the outcome of the trip and the state of the Underland itself. Of course, not all trips play out exactly like that, but they’re all pretty similar to that. Prophecy of Bane is little different, but still enough to feel as though it’s a real adventure. Although, there is one key issue about this particular adventure that has always irked me, even upon my first reading of it: its pacing is weird.

In this adventure, Gregor and co. have to travel by boat into what is referred to as “The Labyrinth,” where the rats are keeping the Bane. They take two boats and fill their capacity with capable members and shove off onto “the Waterway” in the direction of said Labyrinth. The next, oh, hundred pages or so focus on that boat ride. During this time, the novel focuses on dialogue between characters and Gregor thinking. A lot. Add in a few key events here and there and you have yourself half an adventure. On a slow boat ride. With talking and thinking. It’s far too dragged out for its own good and it makes the adventure feel dull. I’m all for character interaction, but a good majority of it seems to be Gregor and co. complaining about the fireflies, who join the quest to make use of their light and are intentionally written as rude and egotistical. Ha ha. There’s too much attention on comic relief and not enough crucial development between characters, aside from Gregor, Luxa, and Howard.

Once the Labyrinth has been breached, it only spends about fifty or so pages within, and some of that is trying to find the Bane and escaping from it. Which leads to Gregor escaping back to Regalia. Great, more traveling. There seems to be a huge amount of time dedicated to traveling in this book. Sometimes it’s drawn out, like the boat ride, and sometimes it’s lightning fast, like after visiting the Labyrinth. There’s not enough action, I feel, within this particular book. Not enough meaningful conversations between secondary characters. Not enough spice to add onto the in-between scenes; the traveling, the planning, the filler. And worse yet, this is when Collins feels she needs to overindulge in description. Unfiltered description with little to no weight is the worse kind of description.

Speaking of description, Prophecy of Bane offers a little more of it than in the first novel, however, as I said above, a lot of it is unnecessary. Describing things like areas that Gregor has already been before. Describing things in the most basic of manners. Fortunately, there is also a good amount of self-description and description of character emotions, which was for the most part lacking in the first novel. Injuries and bruises are detailed spectacularly, enough to make me imagine horrific kinds of things. Crying and anger and anguish. I genuinely feel these characters care about their losses this time around. A lot of carry-on feelings from the first book return as well, which is a nice touch.

The writing, aside from some more description, is still as pragmatic as ever. Gregor does this. Gregor does that. This happens. That happens. Rats do this. Bats do that. Fireflies are dumb. The only real insight given are insights within the mind of Gregor, who is eleven, so he will only think the most mundane and simplistic thoughts ever. Are all rats bad? Are all humans good? Is killing wrong? Am I a monster? Should I be gentle with others’ feelings? Can I judge people from their backgrounds? How is my family? Yeah, yeah, yeah. I realize this is a book for middle schoolers, but c’mon.

I think I may have said it lightly in my review of the first book, but I just can’t believe Gregor is eleven. His mindset and intellectual capabilities paint me the image of an almost grown teenager, maybe sixteen or seventeen. Sure, he doesn’t swear and he’s been through a lot, but really, I don’t know any eleven year old that behaves and thinks as eloquently as Gregor does. Same goes for Luxa. She has a better case as she’s raised under a different culture and she’s shown signs of rebellion and inexperience, but she’s eleven. Eleven year olds shouldn’t act the way Luxa does. Or Gregor, for that matter. It’s not realistic.

Now then, the “Rager” sense. This sense allows Gregor to pick up a weapon and instantly be incredibly skilled with whatever and mow down enemies like he’s playing Dynasty Warriors. This is dumb. Why does he have this? How does he have this? How does this make any sense? How can someone instantly be fine-tuned to know everything about combat with any fighting experience? Is he a robot? Is he a superhero? Why is this just now coming up? Hasn’t he ever been in a fight? When does this sense kick in? Whenever he’s focused? Whenever he has killing intent? Has he never been so mad at anyone that he’s never felt this sensation come upon him? Does he need something in his hand? Why? Why can’t he just activate it? If he can, how does he activate it? Can it be anything in his hand? What about a notebook? A laptop? A plate with a piece of cake on it? A lot of these questions are fucking stupid, yes, but they’re legitimate questions about some made-up sensation that doesn’t have any guidelines. And that’s the issue: it gives Gregor a superpower that makes him more useful than anybody, and, to some extent, invincible. It drops suspense and it encourages fantasy bullshit explanations and resolutions. This isn’t a complete flaw as he only uses it once in any real combat, but it’s the beginning of something that gives him a handicap despite not putting hardly any work into it. Don’t you hate perfect characters?