Instead of typing out a however-long analysis of what I thought of every aspect of this series which, frankly, a show like this doesn’t deserve, I’m going to analyze one particular image from this show. What’s that? Just one image? Indeed. Don’t be alarmed. I think this one image says everything about the effort and the care that was put in the story of Akikan! as a whole. 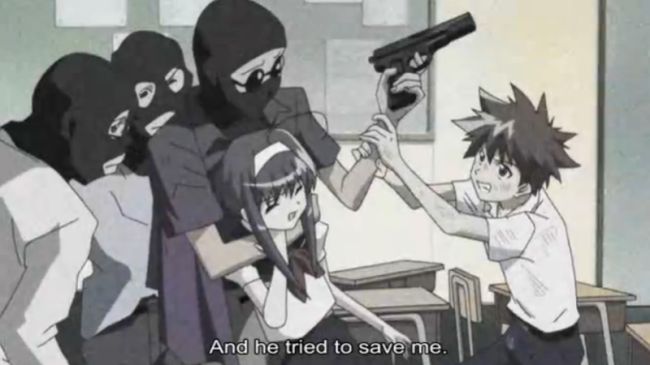 Putting aside the glaring synopsis for this show, let’s erase every ounce of knowledge we have of Akikan! beforehand and study this picture as if it’s something we came across somewhere online. Look closely at this picture. What do you see? Well, there’s a girl being held hostage by three men in masks. One of them has a gun. There’s a fourth man to the right who is trying to subdue the masked man with the gun, presumably in an attempt to save the girl from harm. He decides to do this by grabbing hold of the larger man’s arm with the gun in it.

Now, let’s look a little deeper into this image. What are, say, the expressions of some of these characters? Well, the girl looks distressed, obviously, as she’s being held in a chokehold by one of the masked men and is being held at gunpoint. The kid trying to save her looks determined and ferocious, fighting very hard to save the life of this girl. And the masked men… well, they looked kind of disturbed. They look almost like they don’t even care. Like they aren’t even trying. Look at how the wielder of the gun’s eyebrows are raised and arched in just the right manner to suggest that he’s struggling, either with the capacity of this kid’s strength or with the realization that this kid’s a fucking maniac. Look at the two behind the gun-wielder. Look as they gaze upon the scene that’s occurring in front of them, and how they don’t seem inclined to move an inch to, say, stop the kid from deterring them. Like the gun-wielder, they give off a fairly calm and lax nature for a situation such as this one, especially with some kid trying to tango with the presumable leader of the trio.

After close inspection, what can we say about this image? What are the possibilities of this scene occurring in our own lives? Would one have the opportunity to march right up to a trio of men with a woman at gunpoint and be able to grasp their arm and fight for their gun? Is this image showing us what we, as a society, have been doing all wrong in terms of hostage situations and how to coerce the ne’er-do-wells into surrendering the urge to fight? What does this say of the collective spirit of teenage boys with the will to fight to save their friends and loved ones? What does it say about the female race if men are both their enemy and their saviors? What does it say about evil if a single boy, ripe with the flowing juices of justice, can run up and disarm evil’s means of destruction in a single, sweeping force?

SPOILER ALERT: THE KID MANAGES TO RIP THE GUN AWAY FROM THE MAN AND SHOOTS ALL THREE OF THEM.