It doesn’t have much flare to it at first glance, and it has the audacity to not put any female characters on the cover(!); Tsuritama is an anime that’s a little more involved than others of its kind.

To the more experienced anime-goer, the name Kunihiko Ikuhara is a common favorite among those who like their anime with glamour and substance. With titles like Mawaru Penguindrum, Shoujo Kakumei Utena, and Yuri Kuma Arashi, Ikuhara has become well-known for his heavy emphasis on symbolism and over-the-top displays of color, sexuality, and seemingly nonsensical plot or characters. Personally, I feel Ikuhara’s work indulges in his clichés far too often for me to find much enjoyment out of (I’ve had Penguindrum on-hold for years and dropped Yuri Arashi), but I’d much rather have the anime industry at least try to have the standard of creativity that Ikuhara places in all his projects.

The reason I’m mentioning any of this is because Tsuritama is an example of a show that does just that; has a good variety of creativity while mixing aspects of symbolism into its premise. Not to mention, very entertaining.

I plan to spend a good chunk of this entry explaining the ways I feel this anime is symbolic and of what, so if you’re not into that kind of thing, skip down to the second to last paragraph or so. In any case, the story is about a teenage boy named Yuki who moves to Enoshima, a small island just off the shore of Japan, with his grandmother. The anime takes note that Yuki moves around all the time, establishing that Yuki has no sense of “home” anywhere in particular but wherever he is with his grandmother. Upon his first day of school, it is revealed that Yuki has a strange flaw to his character: whenever he’s put under stress, he makes a wild, tiki-like face as his face turns as red as his hair. It’s easy to see that Yuki is afflicted with a low self-esteem and a lack of confidence, partially because of this flaw or the flaw is attached to him because of it. Insert Haru, a strange boy who claims to be an alien that attaches himself to Yuki on the basis that he needs him to go fishing with him. How bizarre.

There are also two other characters that become important in Tsuritama: Natsuki, a loner and dubbed “Fishing Prince” of Enoshima, and Akira, an Indian(!) adult in his mid-twenties (or so he claims) who works for a secret organization to monitor Haru’s activities. Together, these four make up the major cast of the series, and provide a collective link to the central character Yuki and his inner person. As I’ve stated before, Yuki is a young boy who has no self-esteem or confidence in himself. He’s constantly moving from place to place and doesn’t know the feeling of camaraderie between friends or any sense of identity for himself aside from the negative ones. He’s essentially a slab of clay that has yet to be touched by the hands of the sculptor. He’s the perfect starting point for character growth and development. Insert Haru, who establishes himself as a strange and uncharacteristically optimistic boy who knows nothing about anything but his own drive to pursue his passion of fishing. Quite a combination, huh? I suspect a reason for that.

But before I dive into the core of things, allow me to also establish the characters of Natsuki and Akira. Natsuki is a loner and a pre-established pro at fishing. His personality comes off as gruff and uncooperative, almost like a boy with conflicts within his family that influence his judgment of others outside the boundaries of just family members. By his debut, he’s already as good as he can be at fishing, giving him the “mentor” role among the cast. Akira’s motivations are entirely through observing Haru. With his involvement in a secret organization, he’s unsurprisingly skeptical and all business. Prior to his direct involvement with the three others, he’s usually seen lurking in the background, watching and listening to everything going on. He also has a “pet” duck named Tapioca, who never leaves his side and can apparently speak to Akira. Also, the organization he works for is called “Duck.” They even have poses.

In my speculative mind, these four characters make up a single being. In this case, the single being is Yuki, with Haru, Natsuki, and Akira being a representation of himself in different settings. Haru is his inner desire for ambition, goal-seeking, and need for companionship. His charismatic personality quickly makes him a popular person within Enoshima, specifically to people he comes into the most contact with. His tireless pursuit for Haru’s company and his involvement with fishing presents Yuki’s innate desire to break out of his shell. Whenever Yuki fails or becomes flustered by his facial flaw, Haru is present to snap him out of it and push him more towards his goal. Forcefully, sure, but with the best of intentions, I assure you.

Natsuki is Yuki’s goal. He is the person that Yuki looks to become, and the inspiration of his desire to fish. Natsuki’s constant challenging allows him to become better acquainted with the difficulties of fishing and to show that following through with a goal or striving to pursue a passion shouldn’t be a one-step program. The level of talent and the image of Natsuki serves as the placeholder for Yuki’s ambition and also allows for Natsuki to open up through use of similar interests. 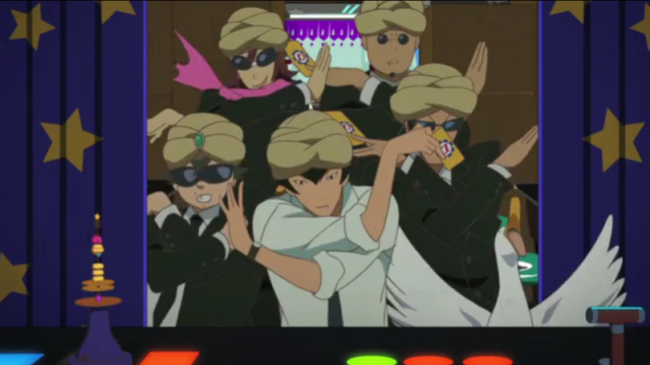 Akira is the symbol of Yuki’s ever-present doubt and complacency. His hesitance to directly approach anyone is like that of a shadow that will never leave. And the fact that his goal is to observe Haru, the figment of Yuki’s ambition and drive, makes the polar opposites all the more fitting. There’s even one scene in episode three(?) where Yuki is trying to cast bait into a pail some ten meters in front of him. After many fruitless attempts to land the bait inside, Akira actually comes up to him and asks why he doesn’t just give up. That is strong evidence to show his symbol of complacency. And hey, I finished Welcome to the NHK! recently and that seems to have influenced my image of “secret organizations” to some degree.

There is also a distinct irony in the setting of Tsuritama. Something I neglected to mention earlier is that whenever Yuki begins to show mannerisms of his facial flaw, a square image of water begins to submerge him. That’s easy enough; nervous people do express a feeling of drowning whenever they’re put under stress. But seeing as the goal provided in the series is fishing, an activity so predicated on water itself, almost gives a sense of overcoming one’s fears. Not to mention, fishing involves catching creatures that are the complete opposite of Yuki in this case: beings with a (albeit unconscious) sense of identity and feeling of comfort in a particular environment. One could make the case that fishing is symbolic of Yuki trying to “fish” himself out from drowning in his own self-loathing or stress.

However, the entire series isn’t completely symbolic. All that I’ve mentioned previously is within the first half of the show. In looking at it that way, this show is broken up into two parts: the character based, symbolically-charged first half, and the plot based, emotionally-charged climax of the second half. I found the first half of the show to be far superior for all that I’ve mentioned above, but the likability of the cast isn’t lost upon the stripping of their symbolic nature. The show, by its end, is still an enjoyable and pleasing one, but also one that tends to dip itself inside the proverbial bowl of liquid cliché. To be fair, a lot of things that arise out of the plot by show’s end are foreshadowed by things present in the first half, so it’s not like it pulls anything out of the ocean randomly. However, I can’t help but challenge the closeness of the main four by series’ end, specifically with Akira. There wasn’t a lot of time to showcase his experiences with them, and he seems to have become a trusted member of their pact either off-screen or by default awfully quick. It leaves much to be desired out of the inevitable “last (insert activity here)” between characters who bond through said mutual interest.

Otherwise, the only genuine flaw I have with Tsuritama is that is doesn’t have much of a… spark to it, I suppose. It doesn’t have much of a hook to it nor does it have any sense of entertainment for those who aren’t accustomed to looking underneath the surface. I enjoyed this anime greatly, but for those who aren’t quick to appreciate symbolic changes of standards, there isn’t much for them to take in. Perhaps the more relatable issues that arise out of Natsuki’s homelife or Yuki’s grandmother’s musings, but that’s about it, off-hand. I don’t feel the character interaction is strong on its own and the overall design isn’t exactly eye candy. I guess the “underdog” story is handled well enough.

Speaking of design, before I wrap up this whopper of a post, allow me to further explain Tsuritama‘s style of art. It has a lot of quirky kinks to it, like spinning triangles in mid-air and chibi-like alien UFO designs. There’s a lot the animators took advantage of to strengthen both the symbolism and the overall experience. However, it only really applies to those situations, as the characters, while memorable-looking, aren’t anything spectacular. The fish seem glazed over and the overall environment isn’t exactly breath-taking. In a word, it’s “passable” on a pragmatic level, but it overexceeds itself in a creative sense, which I feel makes up for most other choices. I did feel some characters looked too much alike, like, well, any female character not including Yuki’s grandmother. And putting aside characters that are drenched in zaniness, such as Akira and Haru, the overall design is, again, passable at best.

I chose to watch this anime because I had it on my Plan to Watch list for a while, and I wanted something a little different after indulging in Princess Lover. Not only did I get exactly what I imagined, but I got something a lot more worthwhile as well. Tsuritama is a thoroughly entertaining and thought-provoking series about the troubles of escaping one’s shell and finding one’s place in life. It’s also got aliens and dragons and secret organizations named after a duck, so you’ve got that angle working for you. It blends the symbolic and the realistic well within the first half, but stumbles a bit later on, making the flaws present in the first half all the more apparent. Regardless, it’s a show I would recommend to just about any fan of anime, and would even recommend it as a starting anime for those new to the anime world. It may be just me, but by show’s end, I got a distinct Studio Ghibli feel from this anime. It’s probably the focus on aliens.