Typically when a series has so high a rating, I get curious above all else. However, with this title, I was unaware of the following that it had achieved in the last year, and upon glancing at the cover art, thought it would be yet another “School club” anime. I was wrong. I was so horribly wrong.

This anime is, gasp, real life!

The first few episodes really set the scene. A group of girls are presenting their own anime to a group of classmates at their local high school. They make a pact with one another that, in the future, they would all come together to make their anime once again in the anime industry for all to see. It then cuts to the main focus of the show: Aoi Miyamori. Shown some years later, she works as an attendant for a long-standing anime studio that’s hovering on the verge of obscurity. What does she do all day? Favors for those who actually work on anime. Ain’t life fun?

Those with short attention spans need not apply; this anime doesn’t embellish itself much. What is the one word I would use to describe this anime? Work. That’s what it is. It’s working in the anime industry. It shows what each role is for, what it provides for the anime as a whole, and the struggles that those within their roles, or their interactions with those in other roles, work to overcome. The anime, as a whole, also just works. It works as an educational piece, a character-study, an engaging story, and the commitment and ambition one must have in order to see results. It’s essentially a love-letter to the anime industry and the impact it’s left on those from the outside based on the determination from those on the inside.

In short, the show just works.

Shirobako has a large variety of characters to its credit, which makes it all the more amazing that it stands out so much as a character study. As would be obvious for an animation studio, a semi-large cast makes up the foundation of the major studio: Musashino. Throughout the series, few come and go, with new characters arriving at some point near the second half. However, the series carefully displays all of the characters present within the studio and gives them enough importance to leave an impression on the viewer—even those who are little more than comic relief. Not all characters get equal treatment, as one would expect from a character roster that spans near twenty people, but most are given at least an adequate amount of screentime, whether to display disparity within the office, humor, or motivation towards one’s actions or behavior.

However, when it comes to characters, there are those who are far more prominent than others. For the most part, I feel the anime does well enough to make them likable, if not lovable characters. That is not to say that they’re all well developed. There is a particular character who is hired by Musashino who comes in with a gruff attitude and a “I-don’t-fuckin’-care” persona. His development is a bit, shall I say, elongated. He remains mysteriously absent for a good majority of his time, with only a few indications of a troubled past. By the time people finally call him out on his shit, his focus tends to wane, and his past is all but revealed within a matter of a single episode. The pacing of this character’s development was a bit jarring for me, and the situation that plagues him I find a little too over-the-top. 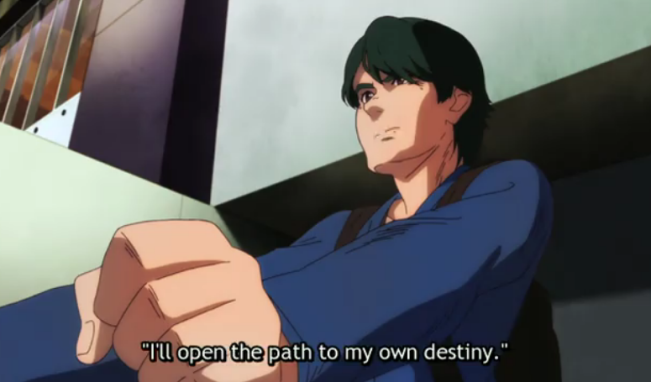 Speaking of over-the-top, I feel this anime has a tendency to embellish setbacks concerning the plot sometimes. I understand the anime industry is a tough place full of sudden changes and shortcuts in order to fit a tight schedule, but some of the things that are brought up are ridiculous. The most evident case of this is with the editor of the manga author in the second half of the series. Funny story: he intentionally never informs the manga author of anything Musashino is doing with his characters and tries to bar them from getting as much feedback as possible. Why? He claims it was to “lighten his workload,” but really? To go out of your way to do whatever possible to have the author remain in the dark about the anime based on his manga? What benefit would that give to anyone? It’s a stupid character made to cause unnecessary drama and conflict. Some may say that the editor was simply lazy and didn’t want to do anything, but how hard is it to send an e-mail saying “Hey, these assholes wanna talk to you about shit. K bye!”? It would take no more than a few minutes. He can’t seriously be that lazy.

Other than that, I don’t have any major issue with this series, which is amazing because there are red flags placed everywhere. A story involving the reality and complexion of anime, nearly twenty characters who all need development and charm, two-cour anime, so it can’t drag on for too long; all these and more are already hard to combat for any studio. For Shirobako to do so while encouraging the inner emotions of friction and pressure to improve the enjoyability of the story and characters makes it high above most others. If I had to nitpick, the later-half of the series has a character who is too shy to even speak words to anybody whom I didn’t really care for. She’s cute, but that’s really all she is. There’s the comic-relief character who remains throughout, too, but even he provides humorous conflict between others and even helps to unravel others’ inner turmoil (see above: smug asshole).

For this series, I actually listened to a good portion of the audio, rather than have my volume down so low that I can only hear high-pitched voices. I’m really glad I did, too, because Shirobako‘s orchestration is fantastically put in only the most tender of moments. I also liked the little musical ode to “Andes Chucky,” which is based on a real anime made in the ’70s. The voice acting I also thought was perfectly suited for most of those they were assigned to, with the MVPs going unanimously to the character serving as the director and the aforementioned comic-relief character who unintentionally serves as a therapist.

Finally, the animation I thought was plain, but suitable… for the most part. The animation really showed its prowess during scenes showcasing the anime being worked on within the story—both of them. All sorts of different unique styles and colors are highlighted to suit all sorts of fancies of fans all intrigued. And episode twenty-three, in of itself, is a treat to behold. I said before that this series doesn’t embellish much, but when it does, it’s surprisingly hilarious. How much more endearing comedy becomes when you like the characters.

If you love anime, you should definitely watch this show. Definitely. It gives an in-depth tour of how anime is made and the complications that can arise at any point, while developing an intriguing story about the ambitions and desire hidden within everyone. Yes, it’s an anime about the hopes and dreams that all people carry with them. As tired as the trope is, Shirobako does enough with the premise and the pacing to make it thoroughly enjoyable and heartwarming and informative, all at the same time. It’s one of the more impressionable watches I’ve had for a long time, one that could possibly find its way into my heart as an established favorite.