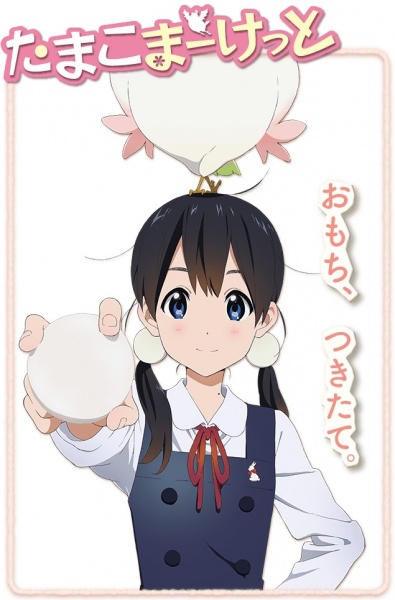 This was a nice start to the Summer of Anime. And I mean that literally, too, as this series had a nice start to it, one that made me feel relaxed and at ease, while also tickling my fancy with an enigmatic and prideful bird full of whimsical gusto. This series had me stunned for a few episodes, as I didn’t think Tamako Market would be anything aside from cute girls doing cute things, but it has something as intricate as a plot! A bird suddenly appears in Tamako’s life, and exclaims that he’s searching for a bride for the prince that he serves under. This doesn’t last long as he eats a shit-ton on mochi, a central concept in this series, and becomes too fat to fly long distances. Oh, what humor comes abound within Tamako Market.

If I could describe this series in one word, I would use the word “unique.” That’s not to say that the series is original in many senses, but I feel it trying to be, along with many other things. The series has talking animals, darker-skinned characters, an implied transgender character, and the stench of a slice-of-life, romance, comedy, and Studio Ghibli all wrapped up in a one-cour series. It incorporates (or tries to) many different settings and moods and plot devices that one could argue the primary genre to be many different things. Tamako Market would be an interesting anime to sit down and interpret, but part of me believes that underneath it all, the pretty moving picture is but a corporate machine trying to take advantage of running trends. 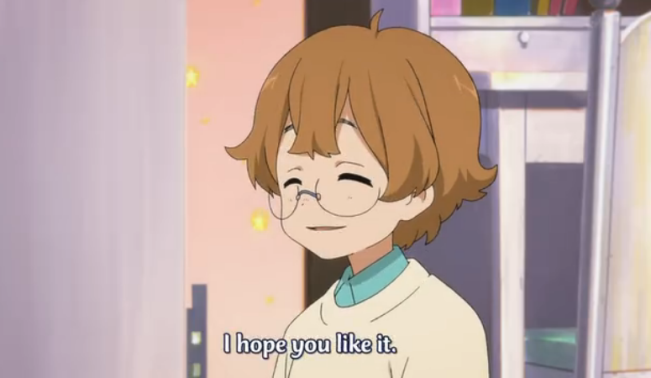 Just as fast as the series captured my interest, it lost it with its meandering direction and commitment to nothing. I grew tired of the series by episode six, but that’s not to say it didn’t improve from there. Much like a series dubbed SaeKano, Tamako Market‘s quality shifts dramatically up and down with each passing episode. The focus could turn to the romantic intentions of a side character and go through his ambitions to convey those feelings with disastrous results, but then switch over to mindless dribble of a coffee shop owner who mumbles on about how music harbors meaning to the soul. Far out, bro. The series has a way of wanting to try to put meaning and intrigue in just about every single character and event that it becomes superficial. It becomes so tedious to try and keep up with everything that when it isn’t focusing on such things, as with showcasing the trivial lives of a few high school girls, it becomes uninteresting and hard to care for. Not to mention, a lot of the characters don’t have the amount of development to care for beyond their significance to the plot.

It wants to convey a sense of family and camaraderie among the denizens of the small, close-knit shopping district that Tamako resides in, and by series’ end, it does this well enough. The only issue is that this series revolves around Tamako, the central character and the girl the series is named after. She is, putting it bluntly, dull. She doesn’t seem to have any sort of deeper thought than that she loves her family, friends, and mochi. It’s really all she has going for her; she’s cheerful, she’s altruistic, and she’s as dense as a male character in a Harem series. Hell, she could be a male character in a Harem series if her attitude went from cheerful to pessimistic. Putting the show essentially on her back makes the series uninteresting. The characters I look forward to seeing on-screen are all directly correlated to her and her needs and desires, whether I like it or not. When a conflict arises with various characters, it’s typically because of or directly related to Tamako, which destroys any sense of individuality among these side characters. God help the character who wants to become something of their own right instead of having to have Tamako cheer them on in order for them to take flight. I’m reminded of Kamisama no Inai Nichiyoubi. 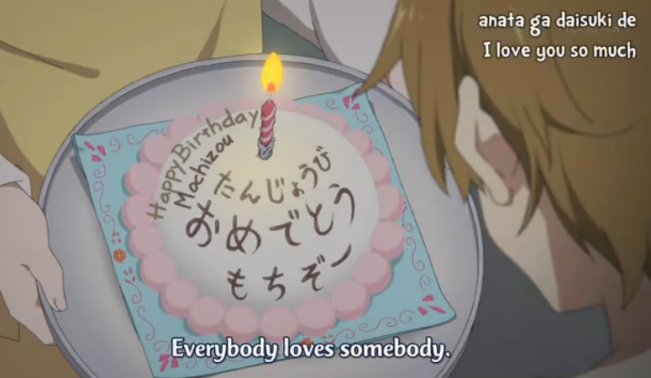 With all that the series tries to do, it doesn’t miss on all factors. I mentioned a talking bird character above, whose name is Dera, that plays well into the comedy of the show. In a sense, Dera can be classified as my favorite character, as he’s the only character I consistently enjoyed seeing on-screen, despite not believing he’s a fully-developed character. He is, in most regards, the comic relief. His arrogant and quick-to-alter temperament is one I enjoyed from the beginning. I also think he’s designed well enough to suit the “moe” factor of this show (and believe me, this series goes for moe). Spending this much time on one character alone shows that I found this series to be at least amusing. Comedy is fairly strong and Dera has a lot to do with that, but characters’ reactions and quick wits also provide some short chuckles. I also thought the emphasis on love was subtle enough to be effective, yet prolonged enough to be irritating. I like how it shows love to be an emotion of dramatic weight and intensity, but for each character experiencing it, even middle-age males, to dance around with red faces, screaming for people to leave them alone, it becomes stupid. I’m sick of characters being shy. I really am.

Upon finishing the series, I read a comment stating that this series was essentially a set-up for Tamako Love Story, a ninety-minute long movie focusing on Tamako and the childhood friend who loves her. I have yet to see the movie, but if it plays out like I expect it to, that comment really rings true… and that isn’t exactly a compliment to the series. It only confirms that Tamako is the star and anyone who tries to jump from outside the realm of her viewpoint must do so with her hand held in theirs. All others be damned. Tamako, Tamako, Tamako.

Another key positive with Tamako Market is the animation. I don’t mean the overall look of the show, which is nice on its own, but the way the characters move and express their facial features. Kyoto Animation is already well-renowned for a number of successful anime series, and it’s easy to see why with how much effort looks to have been put into character models. I haven’t seen an anime with this level of fluidity in quite some time, which only makes me expect the same type of quality from KyoAni’s other works. Free!, anyone? The level of “moe” is also fairly present, effective with cute, teenage girls dancing around in marching band uniforms and having fun with baton practice and whatever else. Pigtails and a hundred different eye, hair, and skin colors, shades, and styles. It almost feels like this series was KyoAni’s playground of uninhibited creativity and cuteness. Even Dera looks cuter when he’s round and plump. Though, if I were to offer any nitpicks, the female characters all do look fairly similar. Their facial features all seem to have the same sort of template, copy-pasted onto other characters. 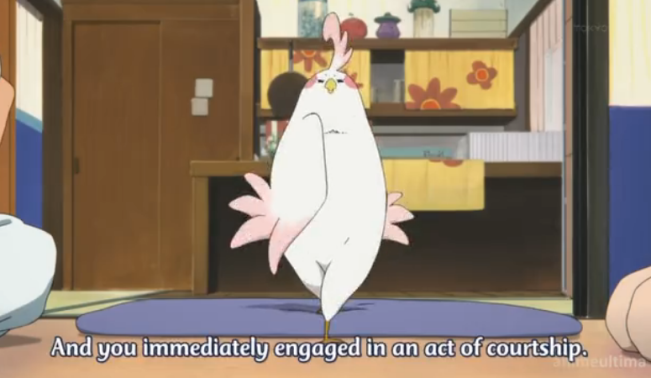 Moe and empty cheerfulness can only reach so far. For someone who enjoys critical thinking and thought-provoking themes, Tamako Market only served as an enjoyable scraping along solid pavement covered in colorful portraits made of chalk. Perhaps I’ll find more enjoyment in a tight-knit focused movie sequel that is Tamako Love Story, but that has little impact on how I view its predecessor. Tamako isn’t enough to pull the show forward with a multitude of other characters hovering around her, and Dera isn’t enough to make the show one of unending whimsy. It struggles aimlessly in-between, never quite reaching the emotional powerhouse it wants to be or achieving the passion that its characters so strongly put forth.