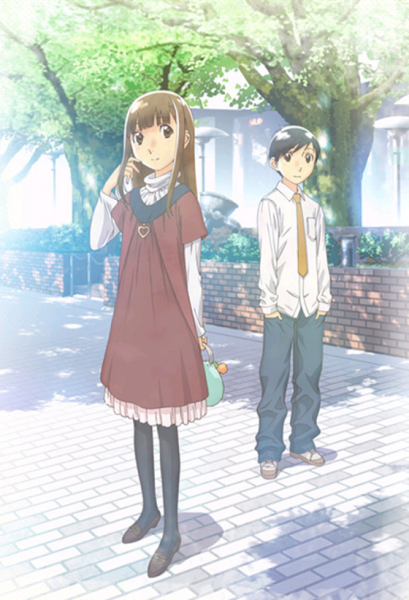 I learned something watching this series. It’s probably not what you think, either. Those who are “in-the-know” are aware that Hourou Musuko is a serious and realistic representation of transgender kids growing up in an environment that isn’t too accepting of that sort of thing. Though, keeping that in mind, one would think there’d be a little more to it, wouldn’t they?

I didn’t hate this series—just the opposite. I think it’s the best series I’ve watched thus far in the Summer. But there’s got to be something to say when the entire anime felt like one monotonous ride from beginning to end. Now, when I say “monotonous,” I’m insinuating that the mood or tone of the show is barely-ever changing. There are noticeably happy, sad, and uncomfortable moments, but they either last as long as a single scene or dissipate into the gradual horde of emotions that the series settles in for 80% of its run. That “horde” is one of peacefulness, with the inevitable twinge of shame, regret, and guilt most of these characters have building up inside of them. It stays like this for far longer than it should. I, for one, don’t care for a lot of drama when it comes to shows with a “controversial” subject as this one, but one must also pay attention to the other end of the spectrum. Too little drama can dull the impact a series could make either with its message or its atmosphere. That is my biggest complaint with this series: with as much as it could have induced drama to further prove a point, it decides to leave it to inner-character dialogue and an occasional argument between two characters to give it a more introspective and somber tone. Hourou Musuko is almost the very definition of “character-driven drama.”

That being said, the story should be seen as a secondary device to the will of the characters. It follows a core group of middle-schoolers, ones who haven’t quite hit puberty yet, and shows the progress of their development as well as their motivations in life and their desires from one another. There is a boy who enjoys dressing up as a girl. A girl who enjoys dressing up as a boy. With a coincidence as large as this, one would readily assume they’re interested in one another; and they are, to some extent. There is a lot of emphasis on the past and future specifically within this anime. The past is shown to give the impression of bad blood between certain characters and the tools for why the characters feel a certain away about others. The future is highlighted because these characters are only 12 to 13-years-old. They’re going through changes they don’t know how to deal with, and with a few of these characters wanting to jump the gender border, it becomes all the more confusing. There is a lot of meaning going on under the surface with almost every character that it’s wonderful to keep tabs on. I only wonder about the realistic qualities of these characters, as some are as (or more) insightful as young adults in other anime. 12 to 13-years-old? It’s pushing the boundaries a little to me.

One word to use would be “subtle.” Hourou Musuko is very subtle with its storytelling and its characters. This may explain why the mood is always so viably stubborn, but it also works to create thought-provoking character behavior and a steady dose of curiosity and child-like whimsy. That’s another thing about this anime that can be thrown into the horde: curiosity. Hourou Musuko conditions you to become “comfortable,” in a way, with the prospect of boys dressing up as girls and vice versa. It instills that sense of questioning the social norms and the reasoning behind the way some people are so against that type of lifestyle. In a way, the anime is almost fantasy-like with its storytelling, with the way characters behave and become so supportive of one another, it’s almost like an ideal world where people can be whoever they want to be, despite the consequences (because they’re disturbingly minimal in Hourou Musuko, I feel).

I can’t say that each character within the story is lovable, or in some cases even developed, but they all come across as “interesting,” and you may interpret that word however you wish to. I think there are certain characters that get more attention than others, while some characters only act as the catalyst for evoking certain thoughts or moods of the scene or situation. For those who do receive a nice share of screentime, I found myself enamored with almost all of them. These are characters that strive within a realistic environment that has people tend to hide part of themselves out of fear of being shunned or otherwise. It’s a loving attempt at creating characters that can work within the environment and pull through being better than who they were at the start. It’s amazing how an anime about pre-teens can showcase characters growing older or gaining wisdom better than most anime with characters in their late teens. The intricacies of each person and their commitment to others is astounding. There is so much beneath the surface that one could do an in-depth study and talk for hours without pause.

There’s a certain type of animation that better suits the “fantasy” environment that I mentioned earlier, and Hourou Musuko conveniently has it! It’s almost dream-like in its presentation, with characters appearing bright and the colors of their person blending into a cream-like mixture of soothing serendipity. The environments are awe-inspiring and invoke calmness and even sleepiness after long gazes. I didn’t see any real hesitation with the characters’ movements or actions, while the facial appearances were also wonderfully-suited to the emotions present. It’s a beautiful anime, in a sense, but it only adds to that mood that never seems to want to change. I have no complaints about it animation-wise, but I always seem to come back to that overall tone. It’s frustrating to say, but I really want to like this anime more, but the lack of any stable conflict or pivotal climax almost provides a feeling of “That’s it?” by the end. There were bits and pieces, but again, nothing stable or pivotal enough to give the impression that the characters couldn’t go through with wanting to become the opposite gender. It’s already one thing to have people who found the thought disgusting, which there definitely were, but there were so many more people who supported the idea that I don’t see why it couldn’t have been done. It makes me wonder if the author had any idea of how to balance that sort of tension and fear within people wanting to jump genders, and those who decry it, into the story without making it completely melodramatic. Part of me wonders if they had originally planned to do so, but didn’t want to destroy the overall atmosphere Hourou Musuko conveys, which I tend to think makes it lacking in impact and resolve.

I was also somewhat impressed by story’s end, too. Hourou Musuko isn’t just about being transgender. It’s about growing up and realizing the things that are important to you and the courage it takes to keep or strive for those goals. It’s wonderfully-crafted and ultimately satisfying, but could’ve been so much more in hindsight. It’s an anime I would definitely recommend to everyone, but those who don’t care to see something slow-paced and without a lot of (surface) dramatic tension won’t find much to see with Hourou Musuko.