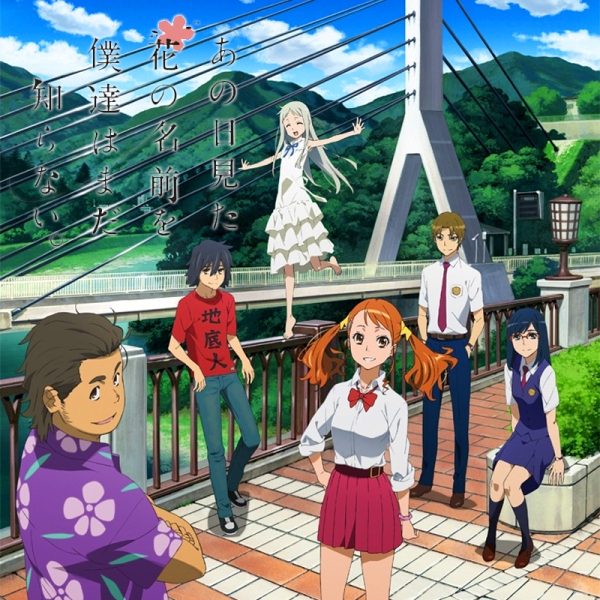 I really wish I could’ve put “AnoHana” in the title, but that wouldn’t make a lot of sense.

I also really wish I could continue on with this entry without stating this, but I can’t: this series is insanely popular. Ever since it debuted in 2011, AnoHana has been the talk of the town for both anime and drama enthusiasts. I’ve seen it on numerous Top 10 Best Anime lists and amongst individual people’s favorites. It currently has a 8.64 average rating on MyAnimeList with scores from over 260,000 people. With that kind of praise and near-universal acclaim, one couldn’t help but go into this expecting a modern masterpiece the likes of Evangelion or Ashita no Joe. Whether or not this is a good thing is up for debate.

There’s a certain intrigue to this series that arose in my mind as I continued to watch the first few episodes. It was setting something up, I could feel it. Something grand, something spectacular. The characters were slowly, but surely opening up the pathways to their deepest and darkest regrets in a way that I felt would accumulate into something more. The pacing was on point and the story began to sprout out of the creative soil. The characters were decent, but time will only make them better. The story was building, growing, changing. The animation began to interact with the mood, highlighting the little bits of grief or regret that certain characters would face. That feeling of nostalgia and the fleeting passage of time constricting the characters’ whims and motivations to a point of acting upon their hearts’ desires. All of this and more, leading up to the final climax. The final feeling of… What can I say? Everything about this series was fine… to a certain point. The characters were fine. The animation was fine. The story was fine. The pacing was fine. The development was fine. Everything was just fine, a far cry from what an emotionally-engaging drama should do for a man with a disheveled heart like mine. I remained interested, but never truly immersed. I felt for the characters, but never really cared. Everything about this series seems to stretch out farther than it could possibly reach. It’s an attempt to produce a piece of art out of sheer empathy, and the residual power of nostalgia, regret, change, and love. But without the proper (and very strategic) placement of the pieces that create the body of work, this piece of art will become the likes of Frankenstein’s monster. AnoHana is somewhere in between, with the physical make-up of a beautiful creature, but without the ability to acclimate into a place it can call home.

This anime is almost like the fleeting feeling it tries so hard to replicate with its characters. It’s a series that has good moments to it, but only those it can look back on with teary eyes. Most of these good moments come from its characters, as they behave well enough to convince a viewer to empathize with their self-conceived sins. Their behavior in the face of love being lost is hard to argue against, though the execution stretches the limits of melodrama more than a few times. The core personalities of each character are also something to look forward to. The way they take shape upon being visited by the ghostly mediator gives a keen sense of progress in reuniting a camaraderie that may not have been as close as previously thought.

For the three people unaware, AnoHana is about a group of six people who used to hang out a lot together as kids, until one of the group members died in an accident. Some years later, the ghost of the sixth member reappears in front of the proclaimed “leader” of the group, who is now a depressed shut-in. Through use of this sudden reappearance, the ghostly member convinces the leader to reunite the gang in an attempt to get his, and all the rest of their lives back on track. The conflicts that arise through this sudden reappearance are what make up the bulk of AnoHana‘s 11-episode run.

I would like to point out the single-most prominent issue I have with this series: Menma. For those who have read my Tamako Market entry, I discussed that the core problem in that series is that it revolved around an uninteresting and unappealing lead, which served as an obstacle for the growth and/or likability of other characters. This is also the case here for AnoHana, as Menma, the ghostly girl, is a perfect caricature of Jesus Christ. All she has going for her is that she’s cute and bubbly, while also thinking of everyone but herself. Her entire role in the series is to be missed, pitied, and fought over, and it makes the characters around her suit that role to horribly cliché levels. I gave (and still give) zero shits about Menma as a character, as the viewer only sees her as “the one who died,” without any other motivation to see her as her own person. Not to mention, a lot of the conflict in earlier episodes would’ve been resolved if Menma had simply done something other than nothing. It’s shown that she can interact with various objects in the real world, yet she doesn’t take advantage of it to prove her existence to other members of the group. I would’ve liked to see more of her past as opposed to other member’s pasts that directly involved her, because god damn does every character obsess over her a tad too much. Especially Menma’s mother. That scene was really out of place.

The cherry on top, the final nail in the coffin, and whatever other metaphor you can think of, is the final episode. I praise the series for being so internal and calculated with its drama in the beginning, and the very minute extent of genuine angst the characters displayed whenever a problem arose. The final episode kicks this to the curb and ramps up the drama to almost stupid levels. Everyone finally shouts out everything that has ever been wrong and why they feel guilty about Menma’s death. There’s crying and shouting and love interests revealed and everything… everything is such a mess of drama that even I, as someone who will defend Toradora‘s final few episodes, cringed with the amount of melodrama in front of me. All of this because of Menma. All of this because they had to do it all at once. All because the final episode has to be the most dramatic, the most emotionally-charged, the most explosive in emotional energy. Like a volcano erupting. A Death Star exploding. A sick man throwing up. I really need to quit with the metaphors.

It is thanks to this final episode that I realized I never cared up to that point anyway. The final episode is supposed to be the dramatic climax. I get that. But wouldn’t this overflow of tragic and/or happy revelations conceive some sort of emotional response from me, the viewer? It should, but it didn’t. I sat stone-faced as I took in every minute of the final episode. By that time I was realizing what I already knew, and that is the series is mediocre, but not without its more fond atmosphere.

The animation is what one could expect from a (seemingly) high-budget affair. It’s crisp, it’s fresh, it’s colorful, and it suits each mood beautifully. There are key segments where the animation begins to spatter uncontrollably, trying for a more realistic approach at fast movements. It’s both good and bad, as it makes it more realistic, but also a little goofy from an animation standpoint. This is likely just a nitpick, but I also don’t like that they choose their moments to make the animation more realistic. I understand I’m asking too much from the animators to make every move more realistic and quick, but to save it for moments I, personally, don’t find appealing seems picky. Otherwise, I have no complaints about overall design and animation. It’s a good-looking series.

AnoHana is a goldmine for those who can cry at anything. Those emotionally-tuned will find a lot to like about AnoHana, but as a logical critic, there’s not much for me to munch on. Had the series continued the way it had within the first few episodes, I feel the series would’ve been a little more constructive, and given a little bit more reason for the viewer to care by series’ end. Besides, why listen to me? It’s such a highly-rated anime and beloved by everyone that I clearly hold no jurisdiction in trying to dampen the golden hue this series exudes. It wouldn’t be the first time I disliked a very popular anime. It certainly won’t be the last. But for what it’s worth, AnoHana has semblances of what make the series so beloved. The way it finishes and the way it slides over its plotholes, however, is what makes the series ultimately underwhelming.