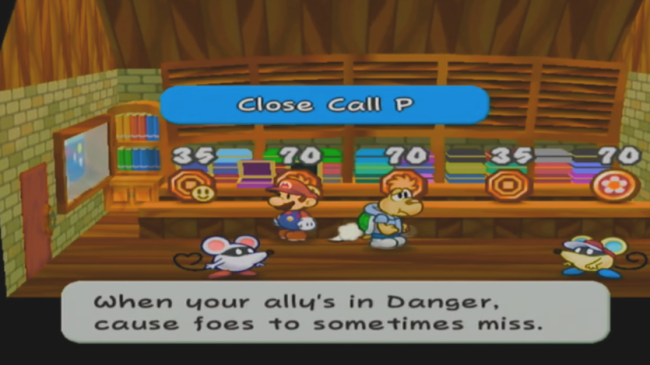 Something I’ve been alluding to throughout most of my previous entries of Traveling Thoughts is the use of the badge system. But what exactly are badges, and what do they do? Well, come with me, and you’ll be, in a world of pure imagination.

Badges are something akin to stickers in Super Smash Bros. Brawl. They’re collectible doodads that Mario and co. can use to upgrade their character, though most prominently for use in battle. Badges can range from health regenerators to alternate attacks to silly sound effects, and even familiar-colored uniforms for Mario to wear. Badges are either given to you or hidden within small chests or crevices hidden from sight. There’s even a badge shop (pictured above) and a badge vendor (both above and below ground in Rogueport) for the player to purchase from. Badges are pretty prevalent throughout the game, though most of the rarer, more useful badges can only be acquired through determined combing.

Mario is given his first badge from Professor Frankly after first discovering the Thousand-year Door. The “Power Smash” ability is essentially a powered up version of the regular Hammer attack. It serves as a good trial badge for up and coming players to use without getting into the more sophisticated attack badges later on. The best part is that the Power Smash badge is useful at any stage of the game, serving as an upgraded boost to the normal attack with a relatively low BP cost. And speaking of BP, that’s another important thing in need of discussing.

BP stands for “Badge Points.” Badge Points are what is necessary to use certain attack badges, such as the Power Smash. Using them in battle requires FP, as discussed in a previous entry, while having those abilities to begin with requires BP. Mario starts with three BP, and with every level up, Mario is given the option to upgrade his BP count by three points. While I tend to put more importance to FP, I believe BP is always suggested to upgrade when players are starting out the game. Throughout the first few chapters, many different badges and enemies will be thrown at the player that require different ways of effective damaging. I always strategize for this inevitable buffet of baddies by upgrading my BP count so that I have a comfortable number of attacks to prepare myself with. This emphasis on BP also requires my already heightened emphasis on upgrading FP, which is what’s typically required to use all of these different moves. It’s always a toss-up for beginners to the game, though, as HP is obviously a standard necessity for higher leveled enemies. It’s nice to stay balanced with your stats, but as someone who’s played this game many times over, it’s easy for me to get carried away with the numerous badges at my disposal.

Bringing up my experience with the game, there are plenty of badges that could provide handy assistance within battles, but there are a lot of badges I tend to ignore. I’m usually taken with attack badges and randomizer effects during the start of each battle, along with immunity badges such as Spike Shield, which allows you to Jump on spiky enemies. Badges such as HP Up, Close Call, or Power Plus aren’t badges I usually hold onto, whether it be too costing towards my BP count or I want to conserve my BP count for other badges. I would definitely recommend trying out all sorts of different badges, but there are some (especially earlier on in the game) that are more geared towards coddling beginners than anything.

My stubbornness aside, badges make the game immensely better. It makes the battle system a lot more varied, and gives the player multiple ways to take on enemies and manipulate their weak points. It simultaneously makes Mario stronger while he continues on with his journey, despite the dismissal of the standard statistical system that most RPGs abide by. To some degree, badges are what replaces this statistical system, providing upgrades and different moves for Mario to wield. More than that, badges make the world of Thousand-Year Door more prosperous to explore. Badges are typically hidden from sight, requiring the player to take advantage of their abilities and pay attention to their surroundings. Badges are found in all sorts of different ways, so the player has to think outside the box for various ones. It makes running around areas all the more enjoyable and rewarding, especially since there’s no random encounter effect to slow down the pacing.

Among my favorite of the collectible badges include Lucky Start, which gives Mario a random status effect at the beginning of each battle. Fire Drive, which is a deadly add-on to the Hammer attack which lets Mario knock a fireball into all grounded enemies, while also burning them. The aforementioned Spike Shield. And of course, the L and W Emblems, because who doesn’t want to dress as Wario or Luigi? Combining the two emblems will even give you a Waluigi skin, which I think greatly suits the style of the game.

If there’s one thing about the badge system that I thought could have been improved upon was the badges accessible to Mario’s partners. Okay, perhaps asking for that would make the party a little too OP, but think of the possibilities! Varied movesets to both Mario’s attacks and individual partners? That would be spectacular. Perhaps a badge could make the Yoshi’s egg toss attack have an elemental effect? A badge to make Vivian’s Veil move last two turns instead of one? Bobbery’s Bomb Squad attack throw four mini-bombs instead of three? Or detonate them faster? Koops’s Shell Shield be different colors?! Well, the last one is kind of dumb, but I’d wear it. Why not? From what’s available in-game, the only badges associated with Mario’s partners are labeled with a “P” at the end of a badge’s title. Most of these badges are statistical upgrades, such as Power Plus or Defense Plus, which are nice and all, but it all seems so limited. I only wish they showed a little more care towards the characters that join Mario’s quest. 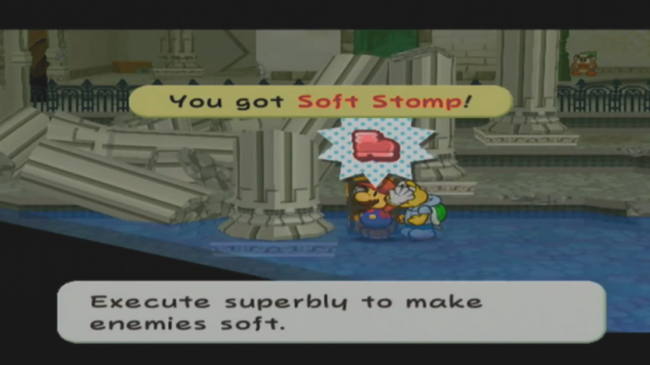 As integral as the badge system is to the game, it’s no wonder why it has so many benefits to the game as it does. Not only does it make the game more fun, but more memorable as well. Even useless badges such as the W and L Emblems and the sound effects can add a little to the memorability of the game. After all, it’s hard to forget Hooktail’s weakness after playing through the game only once. It makes the game more rewarding for exploring, for checking up on the shops with badges available. It makes the battles more unique and more capable. It gives the sense that Mario is getting stronger as he goes along, without the level number really meaning anything stat-wise. It’s by far the most memorable and enjoyable aspect of the game in my eyes, and I always double-check every area and every vendor for more badges to uncover. If one doesn’t like a badge, they could always sell it for profit anyway. It’s a win-win!