Back in 2012, I was brought back into the anime world with Deadman Wonderland, after a friend of mine urged me to watch the series with him. I was immediately infatuated with the series and decided afterwards that I would begin consuming all anime I possibly could. One anime I had heard a lot about, even without knowing a lot of anime at the time, was Tengen Toppa Gurren Lagann. It was decreed by my mind that this anime would become the heir to Deadman Wonderland‘s gateway portal into weeb culture. It was a decision I would never regret… sort of.

I actually ended up watching this together not with my friend, but with my brother, who was also interested in the series. However, we did not finish this series immediately. Upon episode seventeen, we dropped the show. We were aghast with the sudden timeskip and told each other that Gurren Lagann was dead to us, that it would never live up to what the first fifteen episodes had shown us (Episode sixteen is a recap episode). A month went by, and my feelings toward the show had begun to thaw. I convinced my brother that we had to finish it, so that we’ll know for sure if the second-half was meant to be. It dragged on longer than our first time around, but we eventually finished it and deemed it worthy of its ending. Gurren Lagann remains a vital piece to my history with anime, and the magical first Summer of Anime that introduced me to the likes of Toradora!, Ookami to Koushinryou, Working!!, Hanasaku Iroha, and many more; with Gurren Lagann (At least the first half) being the first big “Wow!” series of the bunch.

I knew upon re-watching it that it wouldn’t strike me with the same expressive power of pure masculinity and enthusiasm that it once did. I had rated the series a perfect 10/10 when I discovered MyAnimeList, and as I continued to look back on it, I felt that may have been a tad premature. It was, at one point, among my favorites, but even that felt wrong after a while. I couldn’t help but feel Gurren Lagann was simply “my first,” that sort of magical nostalgia that makes something much greater than it really is, simply because it has such emotional synergy within yourself. It’s common for just about anyone, and as drunk off of nostalgia as I can be, I wonder if I’m not three times as guilty of it than the average person. Even so, as time goes by and I continue to develop my person, series such as these lose their luster. I knew that this series wouldn’t get a 10/10 after a re-watch. It was almost fate that it wouldn’t. I was almost hesitant to re-watch this series in an attempt to preserve that feeling of history, knowing full well what this series once gave me in terms of entertainment, confidence, and shit-loads of motivation. Alas, my critical integrity would not have it. I was to re-watch it at some point and knock that rating down, in order to properly secure an accurate rating for the series.

Now that I’ve re-watched it, I can honestly say how great the series still is.

A lot of people’s complaints about this show is that it relies too much on big words and constant use of human willpower to sort of making anything possible. It destroys any suspense knowing that the characters will eventually scream their way out of trouble, believing they can make the impossible possible. It’s a series that prides itself on flair and theatrics over common sense. A journey of self-discovery that highlights the capabilities of even the weakest, most fragile-hearted human beings when they find their drive. This is a criticism I completely agree with. Gurren Lagann will not impress you with its resolutions. It will not impress you with an intricate story or lack of clichés. It’s good versus evil, humans versus non-humans, those with power versus those without. It is about as simple a story can be through and through. For that, it should be criticized.

But one thing this series has, which makes the series immensely enjoyable, incredibly relatable, and catapults it among the list of classics that anime has to offer is that it has a heart. It has soul. It has energy and spirit. It’s an anime that was meant to embody the spirit of humanity and their quest to overtake everything for the good of civilization (most of us, anyway). It has care and effort put into just about each and every frame, every character, every explosion, every transformation. Gurren Lagann has this amazing power that wraps the viewer in with this dead horse-beating plot and scenario, sets it on fire, then has it explode, then takes the ashes of the plot and sprinkles it on top of a big, juicy, tender, incredible steak dinner. Above all, it has character. And the characters are what make this series so great. 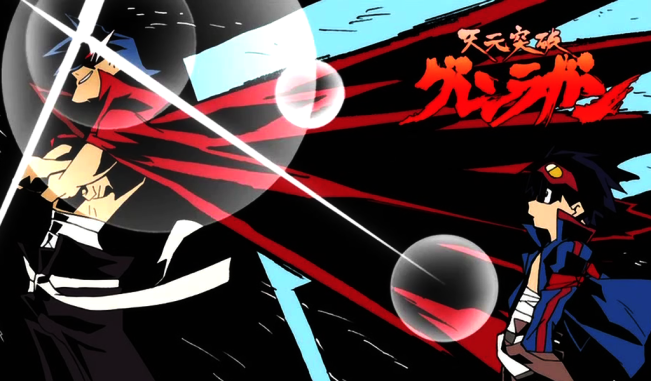 Everyone has heard of Kamina. Everyone. He may as well be as famous as Goku from Dragon Ball. He is the show. He’s what makes it go. He’s the one everyone follows and does so without question. He is an enigmatic demon of charisma and charm that everyone can’t help but be impressed with, despite his lack of any leaderly qualities aside from bossing people around. But the beauty of this character is that he only goes for another: Simon, the real “star” of the show. Simon is what allows Kamina to be himself. And this anime piggybacks this feeling of camaraderie to absurd levels. It gives the sense of real teamwork, of real character closeness. And it goes for others, like Nia, like Kittan, like Lord Genome. All of these characters have something important to them, and it shines through in a vivid display of clarity. Many people may criticize the show for its clichés, but what it makes up with is the depth and the vigor the characters of Gurren Lagann have in every episode. There is no doubt in my mind that the characters are what make this show great. How varied they all are. How unique they all mature to be. The way they interact with one another, and of course, Kamina. He makes the show, and the others follow suit as the series progresses. It is adrenaline personified, and the fact that this series can still give me this amount of enthusiasm when writing about it is definitely worthy of a high rating, but not a perfect one.

If I had one major criticism that I feel is unjustified, it’s episode three. Episode three, overall, felt like filler, had choppy animation, and was ultimately uninspired. It is the only episode where I felt the series lost itself in mediocrity. The entire episode doesn’t have that same magic that makes the rest of the series so great. As odd as it seems to single out an entire episode as a means of major criticism, it almost mocks itself with how tired and insipid it is. Like trying to state an argument and tripping up on the opening paragraph.