One day in Japanland, there was a man who thought to himself, “Hey. What is the weirdest thing I can possibly come up with for a romantic/comedy/drama?” Obviously when it comes to romances, the most approachable and cliché standard is to have a mysterious girl come to the aid of the lonely male hero against his wishes. So, he decided to step it up and bit and make that mysterious girl a parasite. Not quite in the sense of Parasyte, but a cute girl physical representation of the squirmy, disgusting creature crawling inside of the male hero’s intestines, who pops out so that “she” may have physical contact with her host. Isn’t that romantic?

But they can’t have that be the only thing that sticks out about the manga, right? Of course, this male hero has a bunch of female companions who know him through some way or another who make multiple advances upon him (whether serious or not) to flaunt their sexuality in a humorous way. Ha ha ha. One of these companions in particular, his childhood friend, token loli, and cousin-fetish bait package all rolled into one has a certain phenomenon that if she sees anything remotely sexually intriguing, she becomes incredibly horny and tries to sex up the male hero. Regardless of this, she tries to sex up the male hero at every turn, despite nothing sexually-charged happening during the current situation. Basically, she really wants to have sex with her cousin because lol. The rest of the cast includes a sexy, mature nurse with secret origins, the school president who has big, beefy men carry her around like a goddess, a quiet, stoic girl who really enjoys quoting the bible; and anyone else who slipped my mind days after finishing this manga.

Let’s count what the manga’s got going for it thus far:

However, I noted above that the man from Japanland wanted this story to include some drama, and drama shall occur, heed my words. For you see, this “parasistence,” a physical representation of the parasite inside the male hero’s body, is doing some wacky things to our half-pint hero. It gives him superpowers. Yes, that is correct. He can accurately predict people’s future movements, run at high speeds, jump at high altitudes, obtain super strength, and even shoot webs out of his hands. That last example was fake, but I bet you believed me for a moment. The parasistence allows the host to become superhuman… but at a cost. A cost of their humanity. 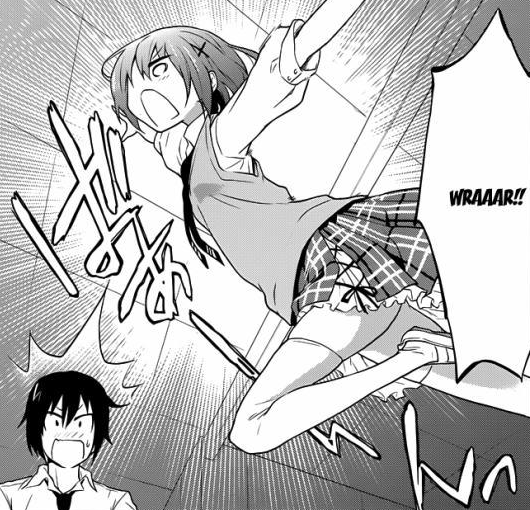 The more the host tries to cope with their superhuman abilities, the less they can fully control themselves—causing them to thrash out beyond their control, harming the people they love and stresses their sanity. It is described as the “curse” of the parasistence: they will consume the owner’s heart. Because, well, they’re parasites.

I fucking swear I’m not making any of this shit up.

So while the first few chapters of the manga deal with how the cheerfulness and otherwise optimistic personality of Sana’s causes the male hero to rethink his entire purpose and outlook on life, the second-half of the manga deals with the male hero deciding whether or not he should release Sana from his system. Seeing as she’s had such an impact on his life (within a WHOPPING two days), the decision is a hard one, but he decides to spare her life because he wants to be her girlfriend. Because if you can’t get one of the actual female human beings within your life that will willingly fuck you whenever you ask for it, you should go and date your tapeworm. That’s so romantic. But before the happy ending can come about, there needs to be a final battle!

I forgot to mention it up to this point, but there are a few “battles” in this manga. And by that I mean Sana taking out a sword and beating the shit out of anyone she supposes a threat to male hero’s life. Where does she get this sword? Who knows? Why are any of these battles even necessary? Who knows? All I know is that I feel like there’s a tapeworm huddled inside my brain somewhere. As coincidence would have it, the aforementioned quiet, stoic girl is actually a parasistence, and it’s implied that the male hero’s father was the one who experimented on her. She was abandoned in an empty apartment because plot and sadness ensues before she asks the male hero to kill her with a handgun she had stashed in her skirt (Uhhhhhh?). Of course, male hero refuses and makes her happy by being a nice guy, but then bad things happen!

The loli-cousin sex freak is jealous of Sana and male hero’s relationship, so she tries to turn herself into a parasistence by eating a raw fish or something. Unfortunately, this raw fish was carrying the T Virus, as it explodes out of her stomach and absorbs her into a mess of tentacles and muscle. It’s up to male hero, Sana, and stoic girl to save this person every reader clearly cares about. In order to beat the bad guy, male hero (and not stoic girl who is more experienced with handling guns) has to use the gun stoic girl uses to shoot the T Virus’s weak spot at its core. But he has one shot (for some reason)! Will he be able to save his precious loli-cousin sex freak?

So they beat the monster and save her and she starts crying and then Sana almost dies and the male hero starts crying and other people start crying and I’m crying and the tears are slowly distorting my ability to see and I fear I’m going blind so I start screaming and my mother becomes concerned and runs down the stairs and pleads with me to calm down but I continue to scream and cry in agony for several hours. Sana doesn’t actually die because happy endings are pretty good and male hero and Sana end up dating because the thought of fornicating with a physical representation of a tapeworm doesn’t disturb him whatsoever so long as the body is muy caliente. Everyone is happy and happiness is abloom everywhere.

The moral of the story is that manga can do literally whatever they want so long as it has a cute girl on the cover. The end.