As a child, I played a lot of interesting games—games many people likely have never heard of. It pains me to think that a game like this would go relatively unnoticed by the general public. Big Ol’ Bass 2 is a game like most fishing games: you fish for fish. But this game in particular has a little creative spark to it. And by that, I mean this game is really weird.

Most of the absurd quirks that come with this game comes in the form of its “World Monster Fishing” mode, which serves as its primary (loosely-termed) story mode. The player takes on the persona of an unnamed angler/photographer who is hired by one Jennifer Clam, chief editor of “World Monster Graphic” magazine, to catch fish in various locations for her publications… and personal pleasure. Throughout the mode, the player will visit places all throughout the globe such as North America, Asia, Africa, Egypt, among others. With each of these stages comes new challenges, though are typically straightforward: catch a varying number of certain fish at an accumulated weight. Actually playing the game has little spice added to it, but it’s the interaction with “characters” that give this game life.

Jennifer Clam is an immeasurably likable gag. Her voice is beautifully over-acted and her dialogue can’t help but make me giggle. She’s a stereotype of the big-wig company official who puts herself above you in every regard, while trying not to make it seem that way. Not to mention, she occasionally plays with the idea that she doesn’t care all that much about her magazine, so long as she can satisfy her own appetite (both figuratively and literally) for monster fish. She alone makes World Monster Fishing worth playing, along with the secrets awaiting at the end of the tour. Clam also really enjoys cosplaying, too. She’s a bit out there.

The absurdity doesn’t end there. Should the player go into the Options and turn on “Live,” they will be introduced to two additional characters: Catherine Maki and Robert Bigmouth. These two serve as in-game announcers for the player whenever they start up a round of fishing. This may sound annoying—and it can be—but these two are a little more than meets the eye. Sure, they could narrate trivial things in a pseudo-enthusiastic manner, which they do, but also slip in a few interesting statements. Maki especially is guilty of such statements. In what context of fishing is “I’m going to knock it down with my charm!” ever appropriate? More than that, this game has tendencies of its own self-awareness in regards to these two’s commentary, to the point where the things they spout become increasingly… sexually-charged.

Maki: I’m going to knock it down with my charm!
Bigmouth: I’m not letting you go that easy!
Maki: Oh!
Bigmouth: Yes! Yes!
Maki: I love you!
Bigmouth: So, how was it?
Maki: Mmm… So-so.
Bigmouth: Good exercise, though, huh?
Maki: I guess so.

(These are all actual quotes from the game.)

Putting aside the incredulous side-attractions, the game itself is pretty simplistic. If one has played a fishing game before, this won’t blow you away with any new features or revolutionary game mechanics. It’s a fishing game at its very core; a very easy fishing game, if I may add. In most fishing games, one is required to hook a fish by pressing a button when a fish has snagged the line, then continuing to press the same button repeatedly while angling the rod in a certain direction as to not overwhelm the line’s pressure, causing it to snap. Big Ol’ Bass 2 is the same way, only in this game, there’s a very exploitable method that can make even the biggest fish a cinch to catch. Once you’ve hooked the fish, continue to tap the reel button (X in this case) while spinning the left analog stick in a counter-clockwise motion all throughout. Not only does it humorously display the angler’s rod as spinning around like a broken ferris wheel, but it’s almost guaranteed to catch the fish without breaking the line. After many hours of playtime, this method has not had my line break once, while the method worked for my brother (who’s played this game more than I have) all but once. Some might say this method makes the game too easy, but the game is already ridiculously easy as it is, so I’m simply exploiting it. 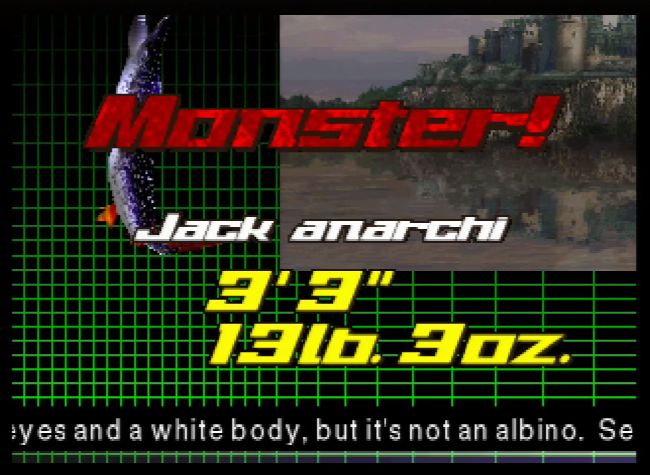 In terms of the game’s ability to run, it does a half-way decent job so long as nothing much is happening on-screen. This includes, but not limited to, too many fish on-screen, the size of the fish on-screen, the movement of the fish being reeled in, and two-player mode. Yes, the game tends to slow down quite a bit when two players are playing the game, especially when one of them is catching a fish. Though, these slow-downs don’t make the game unplayable, only frustratingly tedious for short periods of time. The slow-downs don’t take up every frame, but usually take the game maybe five to ten seconds to pick itself back up. Graphically, the game is okay for a PS1 game, but production values for the game are very noticeably low. The subtitles are pasted lazily into the game and there isn’t a lot of actual, y’know, movement in the game. Jennifer Clam is like one of those visual novel characters who “move” through fading pictures. The fishing is fine, if not a little repetitive, and is works well enough to not cause complaints.

Unfortunately, Big Ol’ Bass 2 is also one of those games where once you’ve completed the main task, there isn’t really much else to do. There’s a tournament mode where you can choose randomly produced characters to duke it out in three different fishing categories, but ultimately doesn’t reward the player with anything. The game, at its core, is a fishing game. If you enjoy fishing (with relatively low expectations), you’ll enjoy the game. However, Big Ol’ Bass 2‘s shelf life is predicated on how much the player enjoys the core game. So if Jennifer Clam doesn’t charm you or if the game becomes too tediously simple, it won’t last you for more than a few hours.

Almost like Undertale, Big Ol’ Bass 2 is a game I would recommend people experience at least once. The game itself isn’t spectacular and doesn’t require much from the player’s perspective, but the little quirks and in-game humor make for a positive experience despite that. Whereas Undertale had the charm of its characters, Big Ol’ Bass 2 relies on kookiness and random spectacles to entice the player into moving forward. This comes in the form of characters like Clam, Bigmouth, and Maki; the variety of fish one can catch, and the bizarre in-game “story” that plays out while in World Monster Fishing. It’s fun with the sort of mindset one would have when trying to uncover a buried treasure, digging deep at the heart of where you’ll feel you’ll uncover vast riches. But what you’re ultimately doing is digging. Is digging fun? Only to certain people, much like the perspective quality of a game like Big Ol’ Bass 2.