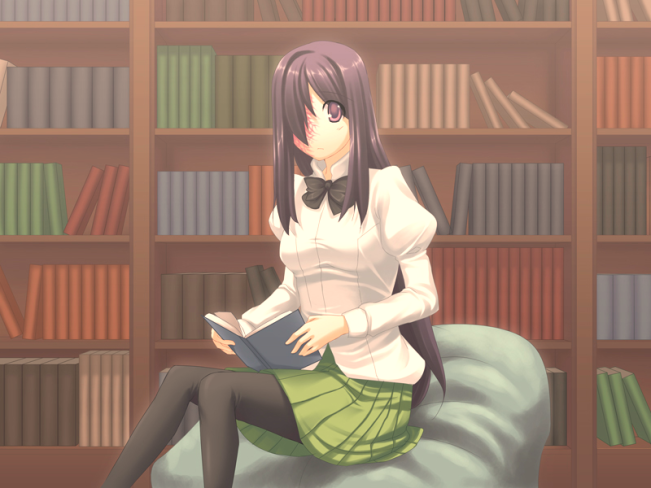 With my heart aflutter after Emi’s route, I was then deathly determined to go through with the route I wanted to do the first time: Hanako. With some now careful maneuvering, I managed to sneak my way around Lilly and straight to the darkened path set before me. When her animated cutscene played, I saved the game and shut my laptop. I had been playing the game for nearly seven hours straight.

It’s funny in hindsight the amount of time I spent dedicated to getting these routes completely finished. I always tell myself “I’ll play until Act 3,” only to have it come to pass and think “Well, I’m too far in now! I have to finish it!” If there’s one thing I can give Katawa Shoujo credit for is that it keeps you coming back for more. After all, that break in-between seven-hour playing spans was a measly thirty minutes. My heart thanked me, even if my eyes didn’t.

I’ll say this here and now: Hanako’s route didn’t really impress me. It lacked the overall flavor of Emi’s route and treated Hanako more as a placement of pity than a romantic partner. I’m fully aware that this was intentional, as Hanako is more shy than Fluttershy crossed with Booker from Animal Crossing. I only hoped that the player would come around and look at her gestures as a sign of romantic interest rather than progress towards curing her phobia of people. Again, this is brought up in her bad ending, which is a very emotionally-charged bad ending, but I wish they would’ve addressed it more during the good route. I suppose you could say that her route is that of a necessary evil, where everything that could be flawed with it was intentional to further develop the personality/calamity involving the girl. It does a good enough job keeping up my interest, but falters when it comes to the more dramatic, overbearingly emotional scenes.

That in mind, I wasn’t too fond of her good ending. She reveals all that was bothering her and more to a player too dense to pick it up earlier, while said player simply listens then hugs her while on the ground. Melodramatic, to a degree. Cliché? Absolutely. Having sex with her and all, it was bound to all fall out of place in one fell swoop, making the second to last scene all the more painfully trite. With as unemotionally attached as I was to Hanako, it didn’t bring to me the same type of “feels” that Emi’s route did. In fact, by the time I finished up her route, I almost felt nothing at all, except the base fascination I had with her extreme timidness (which might be a fetish of mine). That and I think Hanako has the most appealing physical design.

I see a few comments around places discussing Katawa Shoujo that her sex scene was “disgusting,” “repulsive,” and “rape.” In a sense, there are arguments that prove these comments true, as the sex scene was anything but romantic. Her only reason with having sex with the player was in hopes that it would show her in a more womanly light, rather than a pitying one. This alone made the entire scene more fascinating to me, so rather than being turned off by the entire thing (I slightly was, admittedly), I was also curious as to the timing of it all. There was no huge confession beforehand, nor any indication of closeness between the two (if one isn’t counting showing each other their scars). It wasn’t until later when she explained her position that it dawned on me the importance of such a scene. The “necessary evil” quip rears its ugly head yet again and makes the character all the more multi-dimensional. Rather than put the questionable scene out of my mind, I can appreciate it for the layers of context it places within the story and between the characters. Hanako’s story fortunately doesn’t have the same sporadic issues with her sprite model as Emi’s does. The direction of the art scenes tend to embellish the more dramatic moments of the route, such as Hanako freezing up in class or dealing with the subject of her birthday. They have some effect, to be sure, but nothing to the point where I can go to any one picture and remember exactly how I felt gazing upon it for the first time. There are a few pictures that I felt were a little off, perhaps due to some sort of rushed strokes here and there, but nothing substantially off-putting. If there’s one major complaint to be had, it’s the attention of Hanako’s scars. I’m not entirely sure to what degree her scars are meant to portray, but I’ve seen plenty of pictures of surviving burn victims, and her wounds are very light in comparison. Simply making “~” all across her face and body doesn’t really constitute a heartbreaking disability. I can definitely acknowledge that she’d be singled out for it, but it’s not something I feel was exemplified enough. It looks even more arbitrary in drawn portraits. The scene where she shows her entire body to the player, all I could think was, “Wow, your skin’s a little darker and has more creases. Cool.”

It really is a shame that Hanako’s flaws had to override the player’s mindset throughout her route, because there are a number of great scenes along the way. My personal favorite (and among my favorite scenes in the entire game) is when the player, Hanako, Lilly, and her sister, Akira, all go to a jazz club. At first I was skeptical, thinking that some drunken spiel would await me, but was pleasantly surprised by the calming interaction between Hanako and the player, all while playing pool. Accompanied by Red Velvet, among my favorite tunes in the game, there was an atmosphere of romance and understanding that I felt was better than any other scene her route showed thus far. I loved seeing Hanako at peace, along with the daring statements made between her and the player. I finally had something to go on that made up for all the build-up and wall-climbing. The irony was not lost that a place like a jazz club, full of sultry music and swooning audiences, was the perfect environment for the shy Hanako and braindead player to be alone in. Ever since her route ended, I’ve had a hankering to play some pool. And chess.

Most of my complaints of Hanako’s route is through subjective qualms, ones that acknowledge that the sacrifice of emotional mirth was used to better the folds of the storybook’s final scenes. Looking back on it, Hanako’s route is probably, on an objective scale, better than Emi’s. However, the emotional stagnation keeps it from being something even more. Playing through other routes after Hanako’s, both her story and her character became more and more cherished in my mind. Hanako is the wildcard character of this game, where initially she seems quaint and without any emotional depth, but over time unveils herself as one of the more polished sculptures within the withered museum. The more I played the game, the more I came to appreciate her.

While I was disappointed at first, Hanako proved later on to be a very fulfilling and engrossing character to embark a journey of love with. I struggled with what was missing with it upon completion, thinking that there was a puzzling factor that I never considered. I didn’t feel that sense of emotional finality that I had with Emi, that sort of exhaling after holding your breath for so long. Turns out, it’s just that I didn’t have that same empathy with her route that I had with Emi—as she was a more likable character overall and produced a more realistic and relatable relationship with the player. What it lacked in emotional feedback, it more than made up for with depth and an intriguing different glance at the way relationships are born (or torn apart).

Now a certain blonde has my eye.