On February 2nd, 2014, I finished White Album 2 for the first time. I ran through nine straight episodes in one sitting before finishing it up within the next couple of days. Upon completing it, I gushed about how captivating the drama was and the deliciously tragic conclusion. For the first time since (probably) Toradora!, I had been given a true and blue romantic drama that satisfied my expectations of a story within that genre. It felt genuine, it felt fresh, and most of all, it felt serious. No matter what anyone claims, a true romantic drama shouldn’t focus on the happy-go-lucky musings of kids playing around in karaoke bars as drama takes a backseat to comedy and slice-of-life. Drama is built on a continuous, growing tension that feeds upon the underlying atmosphere that comedy only overrides. White Album 2 does this beautifully and I am incredibly thankful for it, as anime in general tries to smooth this over for the sake of keeping the audience entertained.

At one point, this anime made its way onto my favorites list, alongside Toradora!, Ookami to Koushinryou, and Katanagatari. After a while, my opinion of the show came into question as my reminiscing became more and more unclear as to why I loved the series as much as I did. This led to me removing the show from my favorites altogether until I re-watched the show to get a less tentative opinion. That day has now come, and I can definitely understand why I enjoyed the anime as much as I did back then.

Anime is an interesting medium. I don’t need to say such an obvious thing to those already knee-deep into the hobby, but for those of a more Western palette, anime has a way of distinguishing itself from shows outside its region. Every part of culture, no matter where it is, is subject to some sort of standard that comes from what people expect and enjoy from their shows. This, in turn, leads to a lot of clichés developing that are bound to turn off those who watch too many shows of the same genre or those who are ignorant of the culture altogether. I’ve made note of a particular cliché in a few of my past anime posts that show a specific structure that one-cour anime really enjoy pursuing: introducing characters and developing their relationships with one another through light-hearted, humorous interaction, then having a darker, more serious/dramatic conflict suddenly appear in the last few episodes to establish an impact. And as noted in past anime posts, I feel this structure can work in few cases, but is ultimately jarring and ineffective, not to mention incredibly predictable. 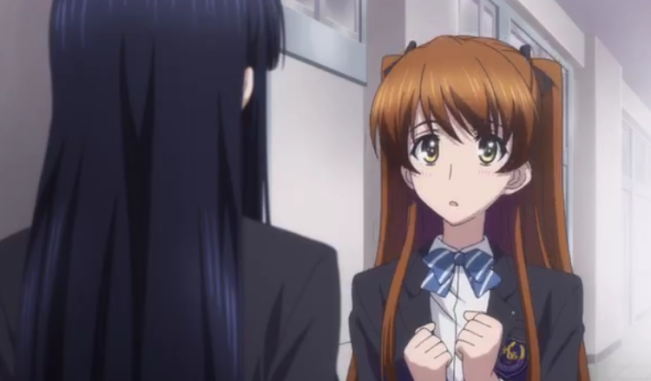 Part of the reason White Album 2 stuck out to me was because it felt like an actual story. It was different from those usual one-cour series starring high school students that didn’t simply flaunt cute girls (and one boy) displaying their one-dimensional personalities in the most expressive ways. There’s a level of build-up present to those willing to watch the characters facial and bodily movements and pay close attention to what they’re saying. Effective uses of foreshadowing and double meanings slip by quickly, as if it were a part of normal conversation, with only an ounce of urgency. It’s one thing to have characters go on grandiose speeches about their feelings of motivations, but sometimes a single line—or even a word—is enough to get the point across. Despite being linear to a degree, I’d rather have a linear story than an aimless one.

Inherently different in structure is just one perk. The anime simply feels different in its atmosphere, as well. The incorporation of orchestrated background pieces, the way the setting always seems to be early evening/night, the lack of any comedic reactions; White Album 2 pulls out every weapon to combat the ensuing aura of familiarity. Despite how little is actually going on in the first couple episodes, it lays out a perception that things are only going to grow more tense as the series continues, especially once Touma gets into the picture.

All of these things still hold up upon second viewing, however they aren’t as engrossing to me now as they were then. As I alluded to, back then I was delighted by the amount of effort put into making the series stand out from the monotonous standard of anime series. This alone gave me enough curiosity to stick with it. Now, I can appreciate the anime’s strengths for how its incorporated to itself and not just to spite the general direction of others compared to it. This also gives me a more concise head for critiquing its flaws, which I found to be a lot more apparent than I originally interpreted.

The key strength of the anime is drama and story. There is a clear focus on ramping up drama to near-absurd levels and luring the characters into doing or saying things they don’t entirely comprehend or intend. Along with this, art direction also plays an important role in glossing the plot. Lots of dark settings, snowy environments, and shots of subtle character movements tell more of a story than words can alone. The way the story is told in the beginning is clear-cut and offers a few twists of intrigue along the way, keeping the viewer’s attention even in the most dull of situations. There’s also some sexual fan service, but that’s not played up to the level most would be irritated with.

There is one thing about the story that I don’t agree with, which is the use of established character interaction prior to the series’s debut. It’s one thing to reveal things to the audience that were off-screen when the focus was on another character, but to hide a relationship without showing any indication that it exists prior to a show’s beginning only to use it as a major plot point later is disgustingly cheap. One could say that the male lead interacts with Touma in the beginning despite never showing any social interaction between the two, but the male lead is also shown to interact with many people, and is dutiful of people and their well-being. One could simply pass this off as the male lead being the male lead, only to find out later that they had a long, extensive history with one another that is never brought up once. I feel this would be somewhat justified if they made any attempt to show that they had some history other than the vague “Oh, I know who you are,” comment. Unfortunately, it goes in line with the same jarring turn of comedy to tragedy that most other series take with its structure. Adding insult to injury, White Album 2 then proceeds to dedicate an episode and a half to showing everything that happened between Touma and the male lead prior to the show’s beginning. While answering a few questions, it also slows down the pacing and adds little to an already established connection. This inclusion feels more like a forced-in OVA special than an actual part of the main story.

This doesn’t necessarily destroy the story overall, rather it makes it only less than stellar. What’s more than less than stellar are the characters of White Album 2. The story would like you to believe that these characters are likable, developed, and interesting by series’s end. Only some of these things apply to some of the characters. None of these apply to the side-characters, as they are only there to fill space. White Album 2 is about the major characters, with side-characters either being there to be there or institute more drama. Of the cast, Ogiso would be my pick for best  character. She is the thorn that sticks into the skin of the proverbial foot, and offers a lot of that visual foreshadowing I keep mentioning. Her insecurities reminded me a lot of my own, and with the first few episodes more dedicated to showing her off, she gets a head start when compared to Touma. There’s nothing particularly wrong with Touma, but she feels more like the object of the story’s affection rather than a person. Her frank attitude combined with her faltering under emotional distress is relatable, though that’s all she really has going for her, other than her desire for her mother’s affection. The male lead is the male lead. He’s actually decent starting off, with some characterization based around his stubbornness and quick wit, but he eventually becomes the bland “Never quit, believe it!” protagonist that most male leads are. Except, of course, he chooses a girl. 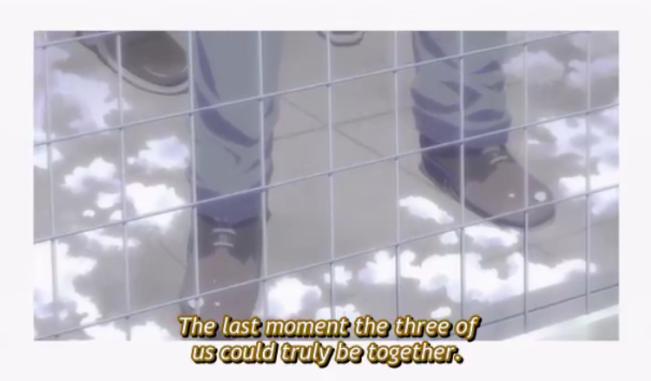 Tone is an important aspect of drama, and White Album 2 knows this. Art and sound intertwined helps to make a mood all the more sweet, sour, and powerful. There are multiple scenes within that are heightened to the extreme thanks to lighting and orchestrated pieces playing along with it. While I’m willing to admit that anime soundtracks normally don’t amuse me, White Album 2 had a particular track play a few times that I really enjoyed. The concert songs had a lot of bounce to them, as well. Even more than that was all that was animated along with it. Budget may have been high with this series, as the artistry present is among the best of its year. Perhaps not among the likes of Attack on Titan, but there’s a lot of really nice looking characters, settings, and overall animation in general. Not always, mind you, as some scenes showcase rather stiff characters from far away or non-moving backgrounds. For the most part though, it has a glimmer that shines in ways most don’t.

There’s something to be said about a series that holds up well even upon originally fragile foundations of affection. I can say with certainty that the flaws present are more than enough to have it not be regarded as a favorite. Still, it has multiple positive assets that transcend its quality to be entertaining for a wide demographic of people. Drama enthusiasts will probably get a big kick out of it, while others less keen on the genre probably won’t care for the overemotional writing. White Album 2 had a profound impact on me the first time around, and while the second time may not be the charm, there’s enough residue from the past to glisten my eyes with newfound appreciation.

The rating for these titles and all others can be found on MyAnimeList.

One thought on “Updated Thoughts on White Album 2 (Spoilers)”