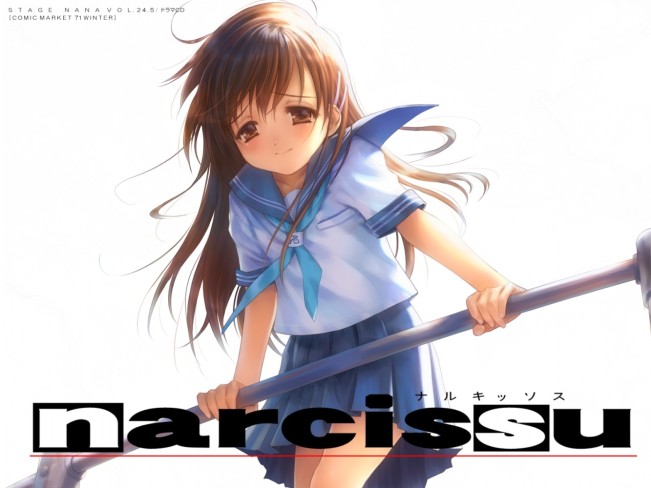 The concept of death has been done to death. Repetition really isn’t great for opening statements. Narcissu is a free-to-play, short visual novel that was recommended to me by a buddy on MyAnimeList. While I wasn’t jumping at the chance, a free visual novel to play after my experience with Katawa Shoujo helped stir me into the direction of cute stories of cute girls… except Narcissu isn’t quite within that tonal degree.

Reading the synopsis for the novel, one would expect a lot of “feels” from the expectations alone. One would be completely right, as the story builds up quietly and evenly to a sound conclusion that brings a number of different emotions to the forefront. Predictable, yes, but still with enough passion and spirit to make a surprisingly impactful narrative. Though, I would complain that the ending feels just a tad too abrupt.

From a gameplay perspective, Narcissu is incredibly bare-boned. No choices, no overarching menu; only text and an occasional, wide-screen image to accompany what’s being told within the story. Even the soundtrack is very minimal, to the point where only one or two themes will play over a large portion of the novel’s runtime. One can absolutely tell that the game didn’t have that great of a budget, if at all. Artistically, the character models look minimalist in quality, with an eerie incompleteness that sticks out both as jaded and symbolic. One might say it’s intentional, while others would argue it’s lazy. Whatever the case, I see it more as being a part of the game: simple and sweet.

Inexperienced as I am in the field, it’s not a terrible visual novel, just one that could have been improved with a little more effort put forth. There were a few noticeable typos in the translation, which may play into that. For the price that it is, it’s well worth the time. However, the experience may differ depending on what people are looking for. Narcissu does well with feels, but not much else. I suppose in the essence of visual novels, this is the key appeal.

A prequel sequel, 2nd Side shows the events of the female lead in 1st Side (along with a few new characters) prior to her story in the latter story. Playing this story immediately after the first may have been a mistake, as the events that transpire are little different, leaving me with a stale taste in the mouth. Not only that, but the typos are more frequent and the dialogue becomes far more dramatic than realistic. The type of story I feared the game may be upon trying 1st Side.

It’s not too much worse, however, as the quality of gameplay is a tad better, with more of a soundtrack and more visually-appealing screenshots. I was impressed with the noticeable difference in game quality, though I wished it would’ve been more used in the first installment. There’s a noticeable drag in the pacing of 2nd Side that goes along with how much longer the story is when compared to 1st Side. With the inclusion of flashback sequences and other characters’perspectives, it feels as though it overstays its welcome to some degree. Speaking positively, it fills in a few holes that were left within the original story and sculpts the female lead into the person she is in the original. The emotional impact, as it is much of the same, rings hollow in comparison.

Much like a prequel OVA of sorts, I would’ve liked if 2nd Side were shorter than the original story. It doesn’t feel entirely necessary and only includes a few beneficial perspectives. I, again, feel it’s a shame that more effort was put into this than 1st Side, as the latter had a lot more going for it in terms of storytelling. I would definitely recommend it for visual novel enthusiasts, but 2nd Side is sort of a tongue-in-cheek relay of the same eerie whisper.

One thought on “Quick Thoughts on Narcissu (1st and 2nd Side)”