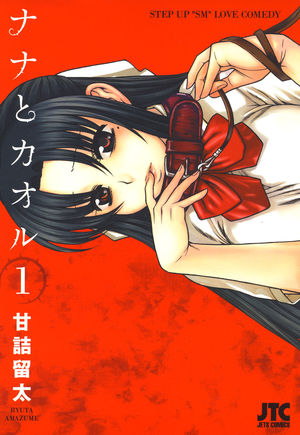 To finally see the end of this manga is a very gratifying feeling. I started this back in May of 2013, the seventh manga I had ever started (not counting one-off manga based on Nintendo titles I purchased throughout my life). Even then, I was enamored with the possibilities of manga and the wider range of ideas that could be presented through this medium that couldn’t with anime. One such idea that intrigued me (along with its high rating on MyAnimeList) was a manga dedicated to the blossoming romance between two polar opposites through a mutual passion for S&M. Of course, the female lead wasn’t keen to the idea at first, as a story based upon something such as S&M, which is slightly taboo for many people, should probably require an entry-level character to experience the sensations of the subject along with the reader.

As a means of an early spoiling of the tone of this post, let it be known that I dropped this manga prior to its finish. The only reason I went back to finish it is because by the time I had dropped it, I was unaware of when it would ever conclude. Conveniently enough, some weeks after dropping it, I noticed that the end had been announced and I was but a short twenty-five or so chapters away from the finish line. While still waiting for the manga to be scanlated, an earnest sense of being able to finish and score the title became the sole motivator of continuing, as the manga’s story and characters had well worn their welcome by that point. 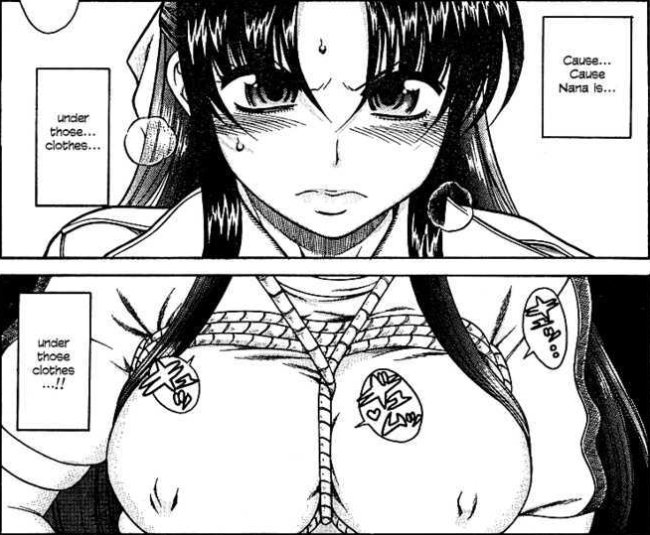 A good place to start is to speak upon the elephant in the room. Nana to Kaoru is about S&M; not the kind of squeaky, innocent S&M that might be watered down to appeal to every audience, but dirty, raunchy, and in some ways sadistic (Pun intended) ways of dominating and humiliating another human being. There’s a reason the act is frowned upon by some, as on the surface, it’s a disgusting fetish that may promote a number of more serious deviant activities. Prejudices aside, the one thing Nana to Kaoru does well is place the act of S&M into a moral equilibrium. In this case, S&M is more about the people who partake in it rather than the act itself, with a lot of dedication and love put into perfecting the craft to fine-tune the “comfort” between two (or more) people involved. A lot of what is shown within the manga may be a tad uncomforting, however the (relative) purity of the major characters help alleviate some of the darker undertones the activity provides.

What better way to help showcase the intensity of something like S&M than with very vivid and detailed artwork? While the style could come across as “uncanny valley,” Nana to Kaoru has a fairly distinct style that’d be hard not to recognize from the male lead alone. Kaoru’s face is very toad-like, with a rounded jaw and wide, oval eyes. This better suits his “deviant” persona, almost like a symbolic representation of society’s view of him and his interests. Nana, on the other hand, is beautiful, busty, and uptight; the very image of a prime and proper dutiful young woman of society (with an enlarged bust). Something of an emphasis on both characters are the lips, which are accentuated in the more… explicit scenarios. It does well to make it stand out from others in its genre and/or target demographic, and the constant use of sexual fan service (justified by the act of S&M) is sure to attract more than a few. One last great emphasis in play is the use of little, but abundant sound cues and symbols parading the panels around the characters faces and bodies to stimulate quick breathing and involuntary sounds. It cranks up the intensity of the “breathers” that Nana and Kaoru take part in and, admittedly, make the act more stimulating to read. If there’s one thing Nana to Kaoru does very right, it’s the intensity of its central subject influenced by its accurate and lustful design. 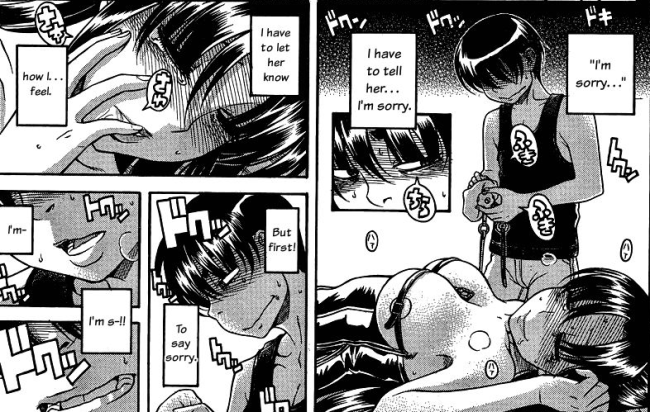 However, this is just about all it does tremendously well, as the strong start and set-up is quickly dissolved into a far too drawn-out, pseudo-emotional tirade of the two main characters trying to figure one another out without being direct. Literal entire chapters occasionally dedicated to one of two main characters moping that they can’t understand what the other is thinking or what they need. If not that, crying about their own perceived uselessness and inability to be of use to the one they cherish most. I chalk a lot of these events up to the tremendously long chapter count of the manga, as I feel it would’ve been better suited chopped in half. The last forty chapters or so feel like a filibuster of sexy proportions, full of S&M without the added passion of what made it so appealing in the first place. So as to not give away too much, the characters are, whether literally or figuratively, running away from one another out of fear. The ending is incredibly anticlimactic and beyond sugar-coatedly cliché. Had the manga decided to resolve a lot of these issues earlier (and faster), Nana to Kaoru may have been recommendable. Unfortunately, no amount of chained-up cuties can save itself from a frustratingly slow pace and lackluster conclusion that effectively paints the characters in a trivial light.

Nana and Kaoru are not the only characters, although. There are the occasional side-characters-turned-major situations that crop up every so often. The most notable example is Ryouko, a track star that attends the same school as Nana and Kaoru. Her presence within the manga serves as an enjoyable side story (and another love interest) for Kaoru and his S&M fetish. She evens takes part in a few of the breathers, with or without Nana there (much to Kaoru’s dismay). Of all the characters, I feel she’s the most relatable from a “normal” standpoint, and her development is nicely fashioned to suit her “Kind of important but not entirely” position in the story. She, too, suffers a tad from her almost uncanny fascination with Kaoru to the point where she develops a one-track (Pun intended) mind. Still, she has the courtesy of being one of the few bright spots story-wise of Nana to Kaoru‘s narrative. 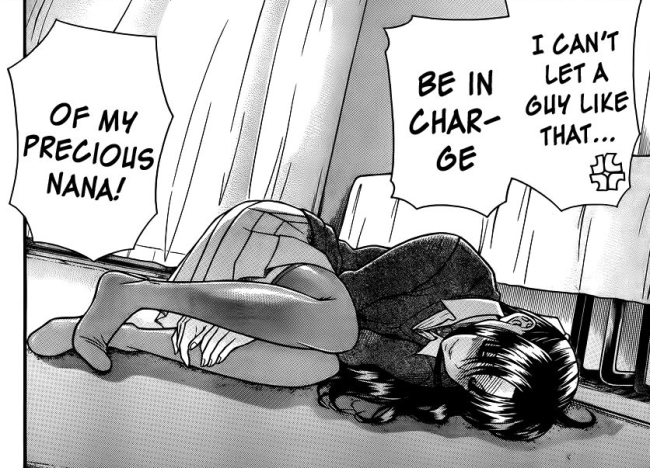 Other characters don’t receive the same treatment, however, as the extent of importance past Nana, Kaoru, and Ryouko vary between “Semi-important for a couple arcs” and “Who was that again?” Cast members such as Mitsuko, Hiroshi, and Kaoru’s mother are only brought to the stage for occasional purposes—many of them being obstructive and annoying. They don’t receive the same amount of attention necessary to make them believable or empathetic, despite a few of them saying a few insightful lines of wisdom. A few even come off as unnecessary to the general scope of things, or are introduced so late that any sense of development they could get is deemed less important than the growing conflict between the main characters. I suppose one could say that this manga isn’t one could point to as a potent character study, despite the themes present to challenge those who view it and those involved in an unsightly manner.

There are no regrets to picking up Nana to Kaoru, despite the length it took me to finish it and the headaches it caused picking up with the last arc of the story. It has a way of tenderizing the juiciest of meats to make them seem all the more succulent, especially early on. The major issue at hand is it keeps tenderizing, beating, and massaging the meat until it’s nothing but bones—hardy, indigestible bones. Again, had the manga stopped halfway through its massive chapter count, it would probably be recommendable as an interesting study piece of S&M and those new to the spectrum. Instead, it throws in a predictable (and woefully repetitive) love story between two growing teenagers who can’t seem to open their mouths when it counts… gag-play aside.