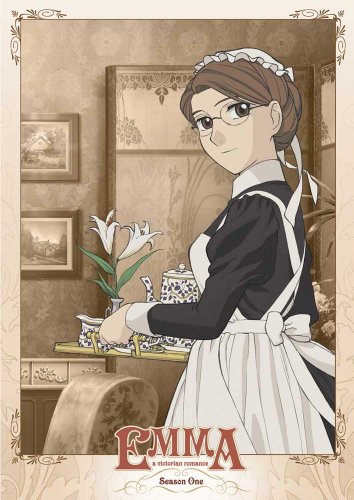 Seeing as this season ends rather abruptly, leading to a direct conclusion via second season, my thoughts will be kept short this time around. I will direct my thoughts to the basic foundation of what Emma does right and wrong, saving some of the more intricate details for the inevitable second season post, whenever that comes around. I only do this because, well, I have a nagging suspicion that the second season will have more to talk about.

Kaoru Mori has a bit of a reputation as a history nut, and it’s displayed through her multiple works, including Emma itself and her current work, Otoyomegatari. As someone who’s been reading Otoyomegatari, I’ve noticed some similarities in character and story cues that Mori seems fond of putting in her works. For better or for worse, the style of Emma is mature, graceful, and without a lot of emotional flair. Its slow pace allows the viewer to soak in every detail of the characters’ everyday lives and mannerisms, along with the chummy chemistry of just about every character familiar with one another. This is similarly so in Otoyomegatari, however, I feel the premise of the latter, which has already established the closeness and familarity of the major characters, better suits this type of atmosphere. In Emma, the main drawing point is the romance, as is shown by its inclusion within the title of the series. The series’ lead female, Emma, is a maid uninterested in the prospect of love, but finds herself charmed by her master’s old student, William Jounes, and his naive demeanor. This leads to an aloof, yet serene journey of developing a romance between them, though they aren’t always the main attraction.

The biggest flaw of Emma is that if one isn’t enthralled by the characters in the manner they’re being portrayed, there simply isn’t anything here for you. It’s not until about ten episodes in does the overall mood and style of narrative drastically change. And better yet, its timing is cliché. There aren’t any one-dimensional characters to make one-dimensional humor. No animated festivities to fluff up the dry air. Emma as a story is incredibly cut and dry, and relishes within the belief that characters should behave realistically within their settings; in this case, as gentlemen, mistresses, and maids. Those with a historical kink would likely enjoy the aesthetic, but to spend so much time going along the ordinary hijinks of high-class and working-class citizens in a time of peace and pleasantries is a challenge to those used to something far more upbeat.

The characters themselves are just that, they suit the environment they’re placed in. Only Hakim immediately comes to mind as someone who hopes to challenge the status quo of the benign lifestyle of others. Only issue with him is that his only purpose within the story seems to either be William’s rival or support. Much in this sense, the characters end up playing a game of “Red Light, Green Light;” basing their behavior and mannerisms around either encouraging or disapproving the relationship between Emma and William. Truly, the story revolves around Emma and William and their relationship, while also showcasing a bit of Emma’s past and relationship with her master. How they decide to pace all of this is questionable on its own.

Let’s not forget visual style now, as evidenced by my recent Twitter activity, Emma has a tendency to go a bit off the rails. Episode six. Episode six in particular (with snippets of other episodes, as well) is bestowed some of the most atrocious animating I’ve ever seen. Characters’ limbs moving too far frame-by-frame, pouring liquids disappearing in an instant, and the incredibly blunt movement of characters, only to come to a dead stop in the most obvious of ways. The entire series isn’t entirely bad with its animation, but has those occasions where the effort (or budget?) is just laughable. I sure got a hoot out of it. Aesthetically, however, the anime is very tranquil. Almost as though one isn’t watching an anime at all but was transported to the UK millenniums ago. Design-wise, I have no complaints. It’s just the movement of it all.

More to come as I finish up the series’ second season, but as it stands, Emma is enjoyable for the right and wrong reasons, while also very curt in its expressiveness, which can lead to some very blank viewing up to a certain point. It has the Mori stamp of approval, with simplicity winning out over everything else. Should that not be an issue for you, Emma will probably serve you well.

One thought on “Quick Thoughts on Emma: A Victorian Romance (Season One)”