There are very few experiences quite like Metroid Prime; not even with other games within its franchise. The game overall is a riveting, fine-tuned, and detailed adventure full of intrigue and atmosphere the likes Nintendo has yet to recapture since. One of the most important aspects of a story is with what people refer to as “The hook,” something to grab the reader right away and decrease the chance they’ll drop the story altogether. While many games take the time to lay out a basic tutorial section prior to any of the more extreme gameplay, Metroid Prime manages to do this and more with a perfect combination of context and world building. The execution of Metroid Prime’s hook, along with a dreary visual style and flawless handling, make it one of the most memorable and beloved opening sequences in video game history. Almost.

Samus Aran has received an unidentified distress beacon from a small space vessel and has taken it upon herself to track it down. Upon arrival, she is met with basic security measures, but the vessel seems all but abandoned. Should this opening scenario ring familiar for fans of the franchise, I deduce that this is an homage to Super Metroid, whose opening sequence is very similar. However, during the era of the Super Nintendo, the hardware could only capture so much of the presence set by that entrance, resulting in only a few, darkened rooms before meeting a harrowing conflict. In Metroid Prime, the scale has been done far beyond the capabilities of what its predecessor set. Room after room of decrepit, broken shambles of scientific activity. Samus can do little but take in the sights of the aftermath of a specific event that doomed the vessel and its passengers. 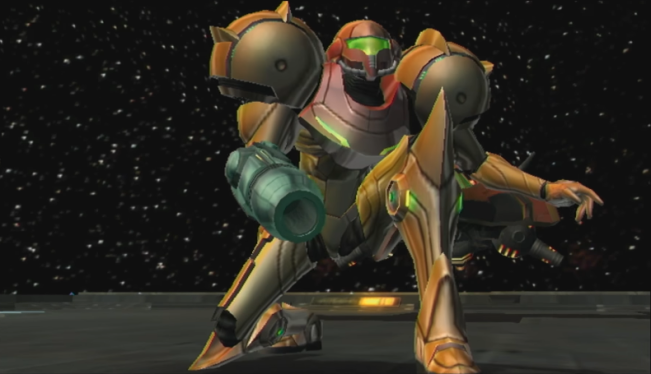 Though not required, it is heavily recommended that one use Samus’s Scan Visor as much as possible during this sequence. While some may complain that it breaks the flow of the game, there’s an endless amount of information present to fill the void of narrative context along the way. What happened to this vessel? What are all of these holding units and specimens being used for? How did it get reduced to this miserable state? All of these questions being answered by logs found within and the remains of what turns out to be Space Pirates build a world and an atmosphere that only Metroid can properly manage to maintain. Scanning each and every area of the frigate brings froth a terrifying tone of foreboding that Samus is soon to discover.

Playing Metroid Prime for the first time, Samus knows only as much as the player does, embodying the eyes and ears of the player through the first-person perspective. While Super Metroid’s side-scrolling perspective does well enough from a narrative aspect, Metroid Prime’s decision to go first-person marked a turning point in the level of immersion present in the game’s ever-changing galaxies. Many of the sights become your own, with the dangers lurking becoming all the more intimate and frightening. It is you finding these things, fighting these creatures, and making your way deeper into what could be your inevitable demise.

Even at 2002 and on a console not known for being high-powered, Metroid Prime’s visual style and sound quality are still top-notch even by today’s standards. With a crashed frigate in the middle of space, drifting aimlessly unmanned, there is a distinct lack in music and a higher emphasis on sound. The horrid coo’s of disgusting creatures known as Parasites, feasting upon the remains of deceased Space Pirates and interfering with the technical aspects of the vessel. The dying groans of what remains of the Space Pirate army. All that accompanies the trek only serves to accentuate the uneasy tension that grows with each room passed. The make-up of the environment is masterfully designed, portraying a ship that experienced a horrific accident, one which almost completely demolished its structure. Fire, debris, corpses, low-lighting, and the necessity to activate certain electronic access points are but some of what lies in wait. As the situation adjusts to meet the events to come, the music changes to suit every situation without fail. Little breaths of air, such as finding hidden trinkets and pathways leading to goodies, are met with a lapse of importance, done by the Metroid franchise’s signature jingle.

Technically, one could argue that this opening sequence is just a tutorial experience for the rest of the game. I would definitely agree, but what makes this so great is the context of the story that doesn’t make it seem so. The only thing that makes this stick out as one are the occasional messages that appear onscreen to aid the player with controls and useful tips. Excluding that, the opening sequence is one that begins the story of Samus’s descent to Tallon IV, the major setting of the game. It also introduces a major antagonist to combat later on in Meta Ridley. A chance to familiarize oneself with the control scheme and handling of the game while also fitting within what makes the Metroid franchise so remarkably eerie.

Most of this post has been a lot of subjective praising of atmosphere and narrative context, but for those wanting something easy to grasp, Metroid Prime controls beautifully. The beam weapon shoots at fast as the player can press the button, the movement is fluid and realistic, input is responsive and never faulty. The game is so well-tuned that even glitching the game is a meticulous process of taking advantage of the game’s intense programming. The only recurring issue I have on occasion is with the Grapple Points, but those are used only once in the opening sequence, so it’s hardly worth noting. Such precision makes battling at tip-top shape efficient and immensely gratifying. One will truly feel as though they’re the universe’s greatest bounty hunter.

The building of tension, the looming darkness behind every door; this foreshadowing leading up to the first boss of the game, and the source of the vessel’s destruction, makes the slow entrance to her domain all the more chilling. Prior to the fight, one can choose to scan a pile of Space Pirate corpses directly before the central core of the frigate, with it describing the bodies as not “. . .[having] been here for long.” This chilling threat makes the lead-up to the battle all the more impactful, even if the boss fight itself isn’t too tough.

What would a Metroid title be without a self-destruct sequence? It at the very least doesn’t feel random this time, as defeating the Parasite Queen has her fall into the reactor core, effectively overheating the power running through the frigate. Again, the music changes from that of nervous anticipation to stressful panic as the player is given seven minutes to escape the time bomb of a space vessel. This change of pace gives the “tutorial” feel of the process feel far behind, pushing the player to think on their toes and traverse what they’ve already experienced back to the entrance. No longer is the slow pace of scanning everything and finding out all that took place, all Samus is focused on is survival, taking advantage of every tool in her arsenal and the disintegrating foundation of the ship. This energy and pace is made all the more memorable by the length and size of the ship altogether, a vast difference from the station in Super Metroid. All the more memorable, for all the wrong reasons, is what occurs during the escape.

At one point, Samus must scan an electrical output to give power to an elevator. Upon doing so, the game will cut to a cinematic scene where Samus quickly turns and faces an oncoming collection of explosions, with the shockwave hurling her hard into the wall of the elevator. Struggling to regain her balance, the suit begins to spark and malfunction, breaking apart into a lesser version of her Varia Suit, simply referred to as the Power Suit. With this, she loses a large assortment of her weapons and utensils, including the Missile Launcher, Morph Ball, and Grapple Beam.

This entire scenario is completely garbage for a number of reasons. While I understand the need to remove items only to find them later on to pad the game, the manner at which it happens is highly illogical. Samus has time and again been shown to withstand a number of strikes and attacks from a variety of different powerful creatures. All of a sudden, the shockwave from a few (visually benign) explosions is enough to knock her back so hard against the wall that it not only destroys her current suit, but flings her other accessories onto the planet below? Lazy is all I can describe it as. Lazy and ridiculous. Why not have Meta Ridley launch a surprise attack against Samus and take her items and scatter them across the surface of Tallon IV? That would make a hell of a lot more sense in hindsight. It’s the one noteworthy thing about the opening sequence that makes it less than flawless.

Nintendo has a high collection of games throughout the years that have had a huge emotional impact on millions of people around the world. For me personally, Metroid Prime is one of those few undeniable experiences that keeps me intrigued and immersed no matter how many times I play through it. It may even be my favorite game of all time, but that’s for another time. One thing’s for sure, though, Metroid Prime has one of greatest opening scenes in the history of Nintendo and video games in general, with a great blend of atmospheric transitions and top-notch technical design and gameplay. It beautifully attains the level of intergalactic space drama that the series used to be known for, without the need for heavy bouts of dialogue and emotional monologues. Everything the player needs to know is shown through the nuances of the game’s environmental storytelling and the optional inclusion of detail through scanning the trinkets that make it up. Even when nothing is said, it says a whole lot more than spoken words could ever manage.