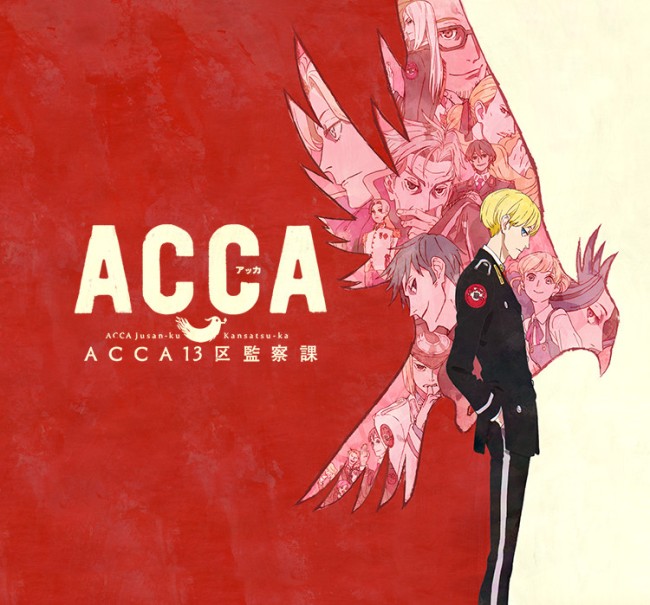 Somewhat of a dark horse within my seasonal anime viewings, ACCA wasn’t originally among my “plan to watch” this season, but was convinced by a certain aniblogger’s pre-season impressions to give it a shot. You know who you are.

And as of three episodes, ACCA is pretty tight-lipped.

There’s a lot of building to this title. Nothing is really put out into the open, taking its time to strike with a lot of “the good stuff” it’s inevitably crafting in the shadows. So far, the audience has gotten to know a certain few characters and their roles within this fictional government and their purpose to its society. In terms of genuine character personality, not a lot is really shown, as most are simply wrapped up in the general term of things, as if everything is familiar to both the characters on-screen and the viewer watching it. My only real issue with this is that it makes it hard to conceive a general impression of what’s been shown with so little actually on the table. I’m hoping this is resolved well before the series’ final episode.

I suppose if one’s most pressing concern is whether or not this anime is worth starting, I’d be more inclined to side with doing so. There’s an intriguing atmosphere with ACCA that’s somewhat rare in anime, especially with those dealing with politics and very slow build-ups. The term “mature” could be appropriate, though I’d place it more as “credible,” as the series seems to know exactly what it’s doing and doesn’t try to gloss it over by using any animated flair or character embellishments. Just last season, Shuumatsu no Izetta dabbled a tad with the issues of government corruption and the political state of kingdoms and what-not. Whereas that series started with flash, bang, boom, ACCA is a lot more controlled and collected with its approach, only letting a little slip out to keep viewers guessing without spoiling that intriguing tone. In my own view, this is the only thing that’s keeping me going, unfortunately, as I’m not as intrigued with the characters as I am the narrative.

Only one breaks this exception: the main character. How fascinating it is that I find myself enjoying the main character of an anime series; and a male one at that! It’s probably not coincidence that this correlates with the fact that he’s not A) teenage, or B) easily excitable or optimistic. His behavior is more along the lines of Oreki from Hyouka, minus the constant desire to do as little as possible. His frankness and constant unmoving expression is a nice change of pace from the typical heroes of modern anime. The one thing I worry about is his intelligence, which has shown in the first two episodes to pick up many things that others couldn’t even conceive without his explanation. I call this “The Sherlock Syndrome,” where one character knows everything based on one or two hints and proceeds without a care or worry in the world, which destroys a lot of the suspense or tension one could have when trying to relate with the character’s situation. His demeanor has this impression that he knows more than he shows. I can only hope he doesn’t know too much. 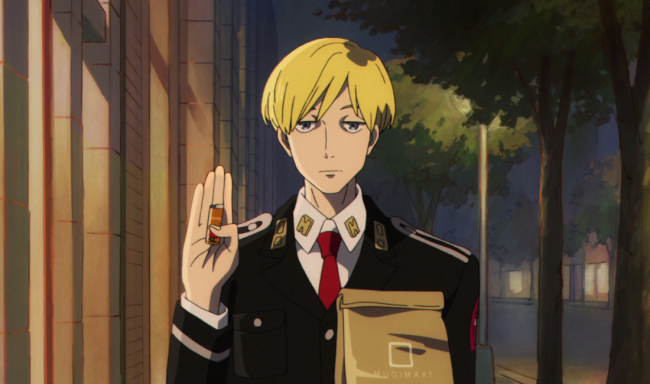 Aside from him, however, I feel many characters are too guarded in secrecy to really be interesting. When everyone’s hiding something, everyone becomes fake. One doesn’t know who to trust or who to really see as human. This works well for the narrative, just not for character relatability or likability. Unless, of course, people really enjoy smug faces with slime for words. While I don’t think there’s a lot to behold animation-wise, the art design behind ACCA is also rather refreshing, with characters actually looking human. (Look at these characters’ eyes! They’re small!) It doesn’t have that sheen or sparkle of series such as To Love-ru Darkness, but it more than makes up for it with a distinct style that works tremendously well with the theme of the show.

I wouldn’t say it’s the best anime I’m watching this season, but it definitely has the potential to be. Who’s to say what could happen from the fallout of all that’s being gathered? With luck, I, and everyone else will be treated to some impactful drama and some better character interaction. In fact, just make these characters step out from the looming shadows overcast.