One of the things I most look forward to when I decide to watch a work by Trigger is the bountiful amount of energy it typically puts into its animation and characters. Kill la Kill is a fantastic example of this, and Kiznaiver toned it down a tad but still gave off enough within its first two episodes to make me optimistic (until it burned itself to the ground). In this case, the series is a more fleshed-out retelling of a Special/Movie that Trigger had released some years prior. As of now, the series is a lot more like Kiznaiver than Kill la Kill, in that the energy is contained by individual scenes and characters rather than continuously all throughout.

What is the most disappointing aspect of Little Witch Academia, however, is the measure of predictability based on its storytelling. Now, I have never seen one Harry Potter movie or read any Harry Potter book, but I feel the anime takes a lot of inspiration from it, to the point where certain situations are almost homages to it. And again, I don’t know a lot about Harry Potter in general, but I do know the books are directed towards kids, so the writing is likely to reflect that demographic. What I mean by this is that characters are going to be incredibly one-dimensional, the narrative is going to appear whimsically up-beat at first, then turn dark as the plot moves along, and the execution of short-term conflicts will showcase the untapped potential of the seemingly inept main character. Oh, look, I just described the anime based on its first three episodes.

It’s a more controlled approach by Trigger this time around, so much so that I feel any studio aside from Trigger could’ve animated this and I wouldn’t be able to tell. Still, this is more of a subjective criticism than anything, as I’ve become expectant of the studio to be wild and bouncy with their animation skills. The way the story has progressed, it certainly has that Disney-esque vibe to it, something in recent years I’ve come to hold in disdain. That’s for another time, though.

Energy within Little Witch Academia comes in the form of the female lead: Akko. Her naive enthusiasm for magic and the antics she involves herself in because of it is the only remains of Trigger’s hand within. She’s played off like a combination of Ryuuko and Mako from Kill la Kill, with the straightforward confidence of Ryuuko and uncanny enthusiasm of Mako. However, her role within the story makes her likable only from her charisma, as her part as “inept dream-pursuer” has been done to death in many other mediums. Her friends (and rivals) are little better. Lotte is the booknerd nervous type. That’s it. Sucy is the ill-moraled occultist freak. That’s it. Diana is the rival character who’s good at everything and constantly shows up Akko by simply doing what’s natural to her. That’s it. Props to Diana, however, as the anime has shown some semblances of her being overwhelmed by the expectations placed upon her. Again, typical, but it’s something. I predict that a lot of these characters will eventually get solo episodes dedicated to expanding their characters, but for now, they’re just along for the ride. 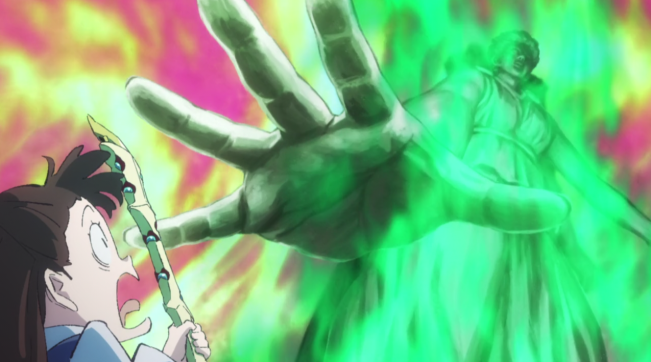 The overall appeal of Little Witch Academia’s design makes a full return for those enamored by its movie counterpart. Though as mentioned before, the approach is a lot more controlled. There are individual moments that stand out from the rest, but are pretty scarcely scattered throughout each episode. Trigger’s distinct style of character design is still present, which I’ve enjoyed tremendously, but that’s all to really look forward to. Something of a random note, but I feel the anime goes out of its way to reference its own studios works. A random bout of fan service for fans of the studio’s other works. In the third episode, Akko will zoom through a family’s home as someone is flipping through channels on their TV. Before it cuts to the next scene, the screen will show MOTHERFUCKIN’ INFERNO COP! The way it gets to this point, however, is questionable, as it doesn’t make much logical sense in hindsight. I’m getting off-track. It has its moments of animated enthusiasm, but not quite enough to keep me consistently bedazzled.

Its predictability will probably bore me for a while. Seeing as it’s a two-cour series, it has all the time in the world to throw some curveballs at us. And while its narrative and characters do little (or nothing) to differentiate themselves from past stories, the clichés present aren’t a complete downfall to the show’s simple charm. I would say it’s the best show I’m currently watching this season, but only because it has the pieces in place to remain consistently entertaining, at the cost of being entirely impactful. If you’re a fan of Harry Potter or Disney, give Little Witch Academia a shot. If you’re a fan of Trigger, be wary.