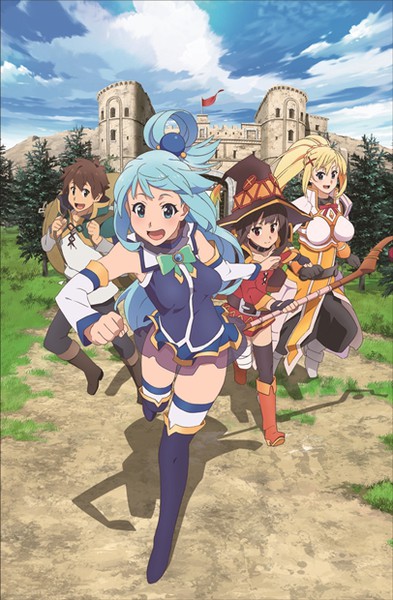 Three episodes in, KonoSuba 2 is much of the same as its predecessor.

For those unaware, I wasn’t a huge fan of the original series, with its one-joke repetition and its attempts at trying to create drama out of a goofy atmosphere. The sequel season doesn’t stray far from this formula, so one would expect my feelings for the series to remain the same, yes? Not quite.

Something that makes the second season more charming than the first is that it doesn’t try so hard to set up the “Serious situation leading into a punchline” formula, rather it settles for simply making every situation as goofy as possible. I feel it makes the consistency of its tone more appropriate and a lot easier to make the characters’ antics and interaction more enjoyable to watch. That said, the character interaction wasn’t so much of a flaw in the first season as it was underwhelmed by its potential. Here, it’s definitely living up more to the potential. 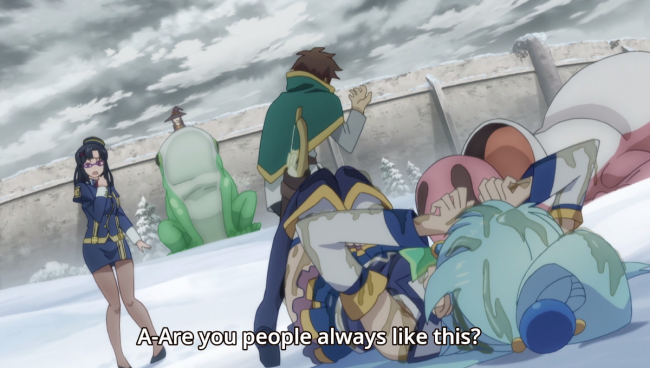 Even so, when going for a more goofy atmosphere, while it makes the series easier to watch, if one isn’t completely charmed by the zaniness, there leaves nothing much left to be impressed by. Animation is one other thing that shines, but I’m also not usually entranced by pretty moving pictures. One likely won’t take a lot of the more serious situations with a straight face, while others (like me) will find them dull (see: episode three’s focus on “The evil wizard”). With the first season as context, a lot of the endearing aspects feel fake knowing that the characters are less than serious players. Perhaps that’s the joke.

Still, if one is a fan of goofy faces, incessant screaming (Seiyuus do A+ job, by the way), and a group of adventurers who are inadequate in almost every way, KonoSuba 2 (and 1) will certainly be your cup of tea. Most of the charm (or so they say) is the complete 180 the series takes when dealing with the typical “Transported to a fantasy realm” trope. This is said “One joke” I was referring to earlier, and I question how long they can make this irony fresh and entertaining. If the beginning of the second season is any indication, they still have some tricks up their sleeve, but aren’t exactly writing up any “LMFAO” content.

This piece ended up being much shorter than I anticipated. Here I thought I didn’t have much to say about ACCA and even that ended up being a decent size. Short form: KonoSuba 2 is almost exactly like its debut season, except its focus on the goofy antics is better suited with all of the introductory situations out of the way. Should it continue to focus on the goofiness, it will end up being a fun little show without a lot of impact, as I don’t find the show all that funny. Maybe it’ll surprise me further in the future. Who knows? Some of the intrigue going into each episode is that we never know what to expect, until it reminds us exactly what we’re here for.