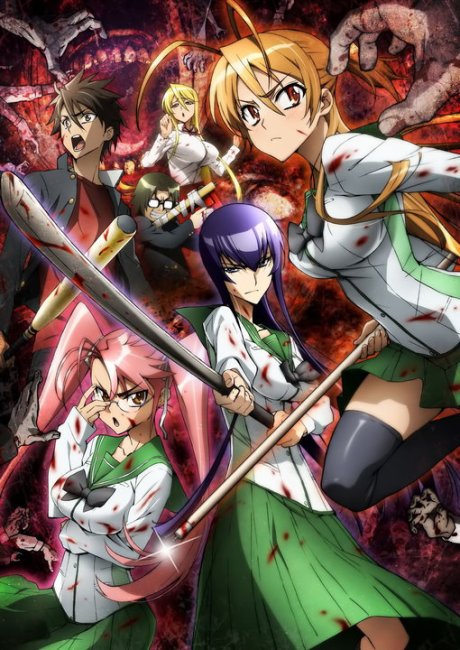 Generally, most anime watchers will see this image and think one of two things:

Highschool of the Dead is infamous for being notoriously lenient with its female cast’s anatomy and non-stop zombie-killing horror. These two things stick out far more than the rest of the anime’s core features, due in part to the quantity of time dedicated to employing different things in just about every episode. Some years ago, when I was still a young’n in the world of anime, this series turned out more entertaining than anything else, and even got some attention as an anime I wish I had viewed earlier than I did. It’s almost a strange case study, as despite the ecchi eruption, Highschool of the Dead is different than about every other alternative. 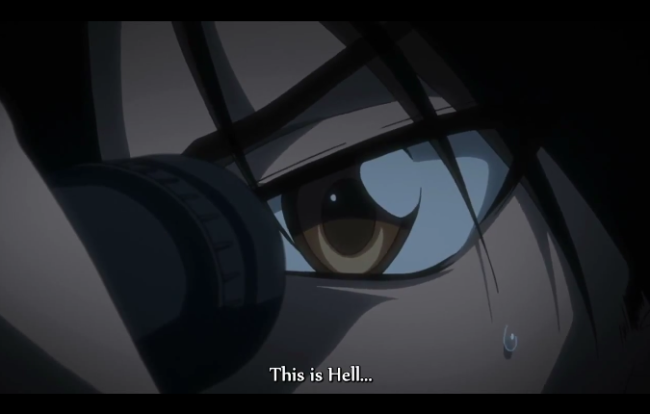 The best thing about the series is actually the first four episodes. People like to insinuate that the sexual fan service is non-stop and continuous throughout, but there’s a modest amount between episodes two and four. A good amount of attention is put into developing the phenomenon that is the zombie apocalypse, mixing with the unknown the main characters have to face as it begins to grow out of control. Characters are established via  personality and their relationship with others within the main group, and acclimate to the situation well enough that the viewer can see them as a capable bunch of fighters. Some might question the characters’ abilities, particularly Hirano, which is justifiable. Balancing out the action, the sexual fan service (though never really necessary), and the character interaction is done well enough within the “Set-up” phase of the anime that it actually becomes fairly immersive and enjoyable.

Unrealistic or not, the main cast has a charm to it that’s lost on a number of other anime with a rag-tag bunch of opposites. While slightly archetypal, the heroes have a good head on most of them, giving a better realism to these particular individuals being so well-equipped to survive. Interactivity between the six is also fairly enjoyable, particularly whenever Takagi is involved, with her fierce determination and tsundere air about her. One member of the group, the airheaded nurse of the school, is a useless, uninteresting, and magnet for sexual fan service character. I’d rather she get cut from the series altogether.

As the series continues, the flaws within its writing begin to rear themselves and mold the story into an eye-rolling tirade of zaniness. Though the first few episodes aren’t completely devoid of this, when the group sets off for the city, the insanity begins to take over the pacing. The action begins to pop up out of nowhere, throwing off the progression of the group and any sense of rest. A few (useless) new characters are added, and recurring characters that were seemingly left to be fed to the zombies become important for short spurts, only to be shoved off yet again. If not recurring characters, then complete strangers. Yes, there is a sense of urgency in trying to make the world seem as psychotic as the events transpiring. And it is because of this that the biggest flaw of Highschool of the Dead becomes far too frequent.

Not the sexual fan service, not the random and unrealistic action scenes; the biggest flaw of the anime is its focus on self-insert style writing. Early on, there was chaos, so no one was really sure how to handle or cope with the situation. Cut to days later, with everyone getting “used to” what was happening, a majority of the characters focused on outside of the main group become A) retarded, or B) insane. Quite often, a situation is presented where a stranger comes up and says or does outrageously stupid things, as the camera cuts to the main group’s serious faces, their eyes narrow in obvious disagreement. Yes, the main group is the only one capable of surviving without a moment’s hesitation, being the clear level-headed intellectual superiors to grown adults and everyone else involved. A bunch of angsty teenagers who write depressing monologues at the beginning and end of almost every episode. Yep. Uh huh.

It makes the scenes hilariously cringy and simplistic. God forbid the series challenges the main group’s line of thinking and lack of experience in the real world in a time where an adult’s wisdom would likely help them tremendously. And the nurse doesn’t count because she’s an idiot. Instead, we have adults chastising these kids because they’re kids and they’re adults and they know everything and the kids know nothing because fuck you. Or we have school teachers who hypnotize a bunch of delirious school students into having orgies inside a school bus (?!?!?!?!?!?). Seriously, the hell is up with this series and its relentless attempts at making the main cast as God-like in every regard as possible? It’s boring, boring and incredibly irritating.

One very positive thing about the series is the focus on art and animation. The series, even for early 2010’s, looks like it could’ve been animated months ago. Everything is very sleek and sharp, accustomed to the current trend of how high-standard anime look. The lighting and atmosphere make the more tense scenes all the more tense… assuming the sexual fan service or stupid characters didn’t ruin it beforehand. The characters are all fairly attractive (even Hirano) and the sexual fan service, as much as people harp on it, works efficiently enough at arousing some members. Not mine, personally, as I’ve become immune to such blatant attempts without any payoff, but it looked very nice. Very nice. Even the animation was pretty consistent, without a lot of shortcuts taken.

As perfect as the story tries to make them out to be, the main cast varies in excellence. Surprisingly enough, there is some effort into developing these characters, most particularly the relationship between the male lead and his childhood girlfriend. Strangely enough, I feel these two are the weakest characters, mostly because of their bland, purer-than-thou personas. Their development (especially the girl) feels somewhat forced, while also a little bit too pseudo-intellectual. That comment about depressing monologues at the beginning and end of each episode wasn’t a joke. The male lead drones on all the time about “the end of the world” and it gets tiring fast. The rest of the cast (excluding the nurse) are a little bit better in this regard. Hirano being the chubby, silly weakling without a gun, and an ace-shooter “badass” with guns, Takagi as a no-nonsense tsundere with a bad mouth (my personal favorite), and Busujima, the mild-mannered and polite swordsman with a desire for power. These characters have a lot more spunk to them that make conversations all the more lively and believable, which is important for a character-driven story. I would almost recommend the anime simply for these three characters, but they don’t match up against the force of mediocrity in the writing.

The rating went down quite a bit, but I had a decent time with this series, at least for a little while. By series’ end, I was ready to be done with it, as the last three episodes are a complete drag, full of the issues I made note of. Should the anime (miraculously) get a second season, I’d be more than willing to watch it with meandering expectations. It has a nice amount of bloodshed and fun that makes for a mindless brainfizzler, along with some above-average characters. If only the series tried to be a little more like The Walking Dead than Zombeavers.

2 thoughts on “Updated Thoughts on Highschool of the Dead”