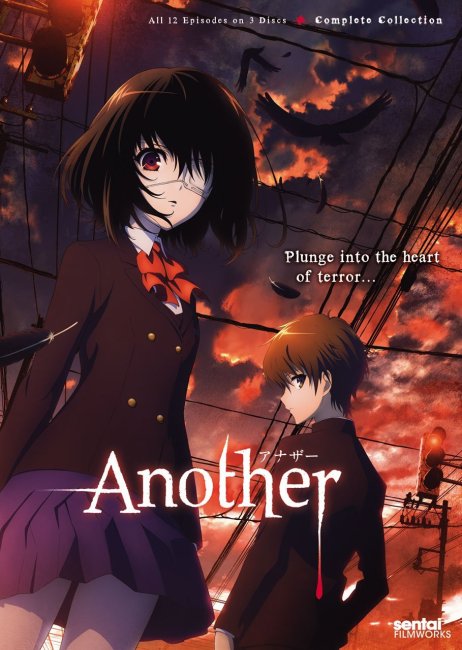 There are anime that are meant to be re-watched, and those that are not. Another is a case of the latter, as the build-up, the tension, and the mystery behind the curse of a specific class in a small, rural town leaves many of its other aspects out to dry in an inescapable heat. Somewhat like India.

Unfortunate as it may be, the re-watch has brought to light something that wasn’t immediately apparent upon first watch: the anime is fairly dull. What makes this more unfortunate is that I can’t accurately describe how important this is combined with the intrigue of the mystery, as it’s inevitably one of the most entertaining parts of the anime. Knowing everything that’s to happen, why it’s happening, and who (or what) is responsible for it all, the feeling of anticipation that stems from it becomes moot. Similar to that of a nice car without any gas, the structure and design is fairly good, if not standard, but without any gas, it won’t go anywhere. Does this make it a bad car? More or less. 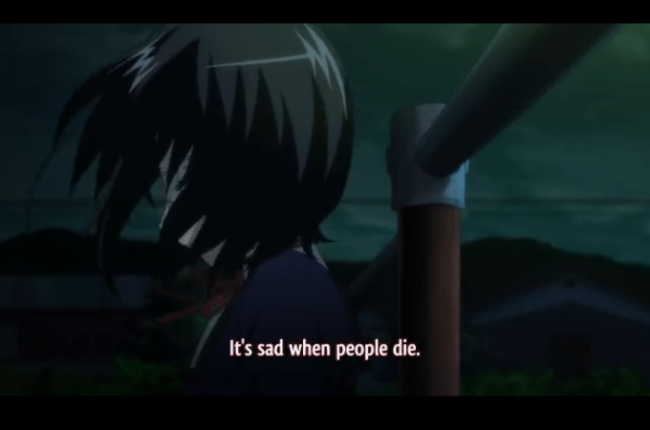 What sheen is available to behold is immediately apparent by the cover art, which translates almost exactly to the series itself. Another is another (ha) hit by P.A. Works, also responsible for Hanasaku Iroha and Tari Tari. If this studio has a reputation for anything, it’s being among the most attractive studios in the field. Most, if not all, of their works have a brilliant sheen to their settings and characters, which makes it somewhat difficult to turn away from their projects. Another does look quite illustrious, though the setting and the genre doesn’t give it much opportunity to be anything other than grimy and dark. When given the chances, however, colors are vibrant and attention-grabbing, working into the spectrum of the world’s mystique. Despite being hampered by the setting, many characters have a feigned ordinary appeal that makes them stand out from the crowd, whether it be a girl with long, red pigtails or a boy with disheveled, brown-blonde hair. It also helps those that are meant to be different stand out all the more. Many have likely seen Misaki without even knowing her origin. She’s somewhat hard to miss.

Structure and foundation are key with a horror story made to build unto a horrifying conclusion. For what it’s worth, this might be Another’s strongest point, as the slow, creeping approach has enough gusto to give every decision, every conversation weight towards the approaching bloodshed. One would likely be trying to guess at which points what will happen and who it will happen to, as subtle clues (varingly) litter across episodes in the form of coincidences and off-handed comments/concerns. The explanations behind the decisions of the classmates and the handling of the curse is done maturely (perhaps too maturely for 14-year-olds) and with a good understanding of what’s important to that rural society. It’s world-building as well as continuing to string along the viewer’s interest. This anime would definitely be well-served as a choice for a marathon, as halting the flow with breaks in-between would probably distill a bit of that tension.

Of course, the issue with knowing what’s to come makes this all the more unnecessary. At the same time, knowing this also brings into focus what exactly the series has outside of it, as one can’t say that a single aspect of a show makes it entirely worth it… right? Foundation and progression of the mystery excluded, the anime doesn’t really have a lot going for it. Design and animation is definitely a plus, though underneath feels a little hollow. The characters are almost entirely defined by their fear of the curse or their supposed involvement in it. Some of my own issues with stories like Another’s is that it doesn’t allow the characters to act like real, likable people. It pressures them to act like serious, surviving animals, running away from a superior threat, which hardly gives them wiggle room for personality. Almost like a Walking Dead-esque atmosphere. Knowing every piece of the puzzle and how it fits doesn’t make a puzzle fun to put together, lest one enjoys the act of building things in itself.

Misaki may be the one exception in terms of character, as she remains an interesting entity nearly all throughout. Still, it’s fairly simple to point out the clearly different individual as the most entertaining, no? Her mannerisms are pragmatic, her interests almost as much. She wears an eyepatch, which invites a lot of criticism for being edgy and intentionally spooky. Her skin is unusually pale, with a bright red eye and jet-black hair. Combined with a quiet voice and an expressionless face, she’s essentially what’s clichély referred to as “doll-like.” It’s even made note of in the anime. Still, when compared to the fairly bleak and unenthusiastic behavior of the rest of the class, it makes her a clear favorite for best character. There’s even some subtle hint at character development as she opens up more to the male lead. Did I forget to mention there’s a male lead? Doesn’t matter anyway. 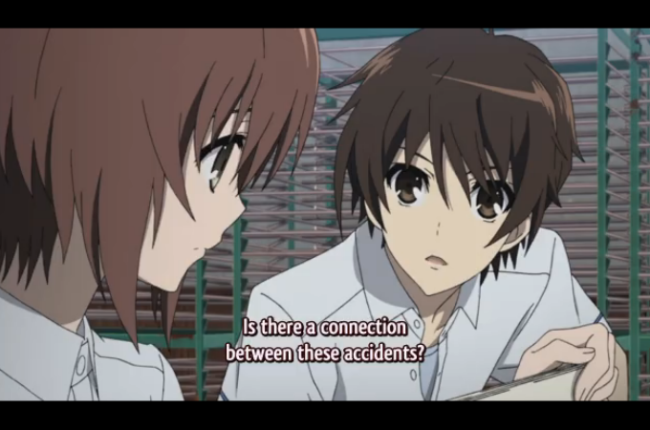 Though the characters aren’t much, the story tries what it can to make up for them. Even then, the story has holes, as well. I’ve often written that I’m willing to deal with fantasy in a nonfiction setting should it fall within the rules that it sets for itself within that universe. Another likes to bend this rule quite a bit, and only bends further the closer it gets to the final episode. To avoid any huge spoilers, I’ll simply state that the conclusion is a stretch, and will only satisfy those that are willing to blindly believe everything the story has told to that point. Numerous times are there examples of things being affected by spirits and the looming inevitability of disaster that really shouldn’t be so leniently conveyed. This is most notable with the prospect of a “memory-cleansing device,” combined with magical beings altering reality with false memories and signatures and what-not. To some extent, it plays into the durability of the curse, but it also reeks of lazy writing, relying too often on filling in the blanks with shouts of “It’s magic! Magic cannot be explained!”

Another should serve as a nice treat for anyone interested in a lot of horrifying imagery and bloodshed, as there’s quite a bit of it. Starting from episode three, a character (or twenty) die just about every episode, if not every other episode. And the way they die somewhat bends the line between reality and hilarious insanity. No joke, a few of the deaths within Another made me laugh. I don’t consider myself a sociopath who revels in the misery and trauma of others, but there’s something about the timing and performance of some of these death scenes that get me. They’re almost ridiculous in the way they’re presented, especially when it deals with things within a character’s control. Still, the earlier deaths are genuinely tinged with a disgusting lack of empathy, which makes them all the more ruthless. There are more “mature” anime out there (see: RIN: Daughter of Mnemosyne), but Another serves well as a whimsically bloody parade of death and darkness.

All in all, the series is probably better than I give it credit for, but I couldn’t even finish the re-watch of it, which must mean something. With all that was noted about the holes within the plot and the standard portrayal of the characters within, Another comes off as a cautious watch for experienced anime-goers. There’s some things to like about it, but there’s not enough to make it a truly compelling watch, especially when watching it for a second time.

4 thoughts on “Updated Thoughts on Another (Through Seven Episodes)”