In a strange turn of events, instead of going by the usual style of rewatching something and then updating my thoughts on it via blog post, I decided to leave poor Haganai alone. I find this even more curious because this is the only case of it happening, at least within the years where I took my blog seriously enough to update it semi-often. Noting my penchant for waxing nostalgic, it’s an even more confusing sentiment that this anime, which was among the first five anime I ever watched in its entirety, didn’t receive any special treatment. To drive the point home, I even finished a knock-off manga version and read up until the second-to-last volume of the light novel before it was taken off Baka-Tsuki for copyright reasons. Why did I feel the need to let this rewatch wither and die within my MAL archives? Regardless, I’m correcting it here and now after a two-year wait.

“Wow,” you may be thinking. It took me two years to write this post? My only excuse is that it simply slipped my mind again and again, until finally realizing it about a year ago… and then forgetting again until a few days ago. The rewatch took place in early August of 2015, so another thing you may be thinking is, “Are you confident enough to remember what you liked and disliked about it after so long?” Fear not, as fate hath given me future perception, and I wrote myself a very detailed post explaining exactly that back in 2015, so for what I cannot recall now, I will simply resort back to my crude notes. 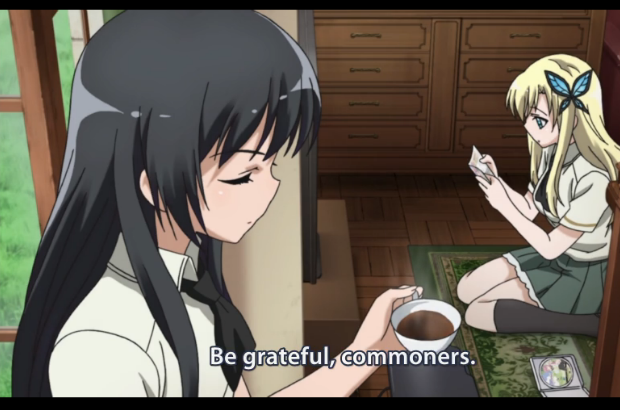 The strongest argument I have toward this series’s good worth is the main duo of female leads: Sena and Yozora. Each character is blunt, stuck in their own ideals, and offer a helping of development as the series goes on. Not to mention, their chemistry with each other, and flaccid male lead Kodaka, makes for a thoroughly entertaining watch, especially within the first three episodes or so. Even while at each other’s throats, one can see the distance between the two supposed opposites begin to close with each passing day.

With this trait, Haganai becomes immediately recommendable; not just due to characters bickering with each other in a humorous way, but the set-up that justifies their behavior. Execution aside, this anime is fairly unique in its approach to popularity, hierarchy within the school system, and the concept of friendship. It’s almost like Oregairu before Oregairu, but without the cynical Hikigaya. Unfortunately, a lot of what could’ve been achieved with these themes and the characters that make up the cast are undermined as the series continues to bring in more characters. With these new characters comes more and more of what makes the high school rom-com setting so predictably bland (and popular): implied harem vibes, an aimless pursuit of having fun and nothing more, and one-dimensional personalities for the sake of humor.

A sequence of bliss and charm surrounded the series as it began, introducing the slightly off-kilter characters and their motivations. The trio of Kodaka, Sena, and Yozora made a wonderful ensemble of fun as each played off of each other in a colorful manner, with Kodaka being the middle-man through it all. Once the series began to attract other specimens, that charm became buried under the weight of outside interference, muddying its core themes and underlying potential for the sake of appealing to the masses. There is a lot of moe present in Haganai, and much of that didn’t start until the trio became a quad, and then a quint, and so on. And these new characters, if not for some subtle growth in the following season, are completely useless. Maria and Kobato should be scrapped altogether or rewritten, while Rika and Yukimura need more than one quirk to move along with—so much so that they all nearly ruined the series for me, at least for this season.

With the mess that was made during the mid-section of this anime, I’m glad I can say that the final episodes make up for it… slightly. Again, the presence of heart and character growth are pursued with full enthusiasm, along with resolving a (horribly executed) secret that loomed in the background throughout the series. It allows some figment of closure before carrying on with the same shenanigans that the series spoils itself with time after time. Not only is it appreciated as a viewer, but the characters (or one of them) become a lot more than what her usual persona portrays.

At one point, the art style for Haganai was a serious turn-off. Their eyes too vivid and large, with their lips protruding and their heads more like tomatoes than apples. Its expressiveness through character design is fairly strange compared to most, with even minor changes to the perspective of where things are, how they’re shaped, and what’s most highlighted making such an impact on the final product. It was weird, to say the least, but I eventually warmed up to it, and now find it one of the anime’s stronger points. With little twitches of movement better humanizing the characters on-screen and only occasional fidgets of inconsistency, it’s worth praising not just for its effectiveness, but its desire to stay true to the original light novel’s art. The only other anime I can think of with a similar style is Denpa Onna.

It’s a fascinating series to go over, seeing as it holds such nostalgic value to me, as well as having a lot of good underneath a mountain of bad. Cut the cast down to the main three, continue what they did for the first three episodes, and incorporate some more perspective on what they feel friendship should be and how they feel the general mass exploits it, and Haganai could’ve been a really fascinating piece of work. Dealing in “what if’s” does nothing here, as the way it stands, it needs to hold onto the crutch of popular exploits to steady itself in relevancy. With things such as lolis, incest, harems, cross-dressing, poop, and pre-teen angst being thrown around like it’s candy, I can only step back and ponder why I gave the series such high regard in the first place.