(As noted in my latest update post, this series is not part of the 2017 Summer of Anime. I completed this series yesterday and am now writing my thoughts on it.)

In a world where anime seems to become less and less desirable the earlier its air date occurred, sometimes one develops a fascination with compensating their taste for everything new with a little oldie. I’m no different from most when it comes to this mindset, as I find various styles from the ’90s and before to be somewhat off-putting. Still, this artistic dismay won’t always detract me from indulging in a product made before I was even born. Take the case of Fushigi no Umi no Nadia, a somewhat underviewed “classic” that served as the first major anime project for the studio Gainax, which would later create Neon Genesis Evangelion. Interestingly enough, the director for this anime would become the creator of the aforementioned title. How do I know this is considered a classic despite it being relatively underviewed by most anime databases? Well, it made the Top 100 Anime list published by NHK some months ago. That must mean something.

For an anime made in 1990, the design seems fairly modern in a lot of aspects. Of course, it doesn’t have the same sleekness or blueprint design of today’s standard character types, but it has enough of a realistic, yet cartoon-ish buoyancy that makes it agreeable for any anime fan. That is, if they can tolerate some major dips in quality at times, along with a somewhat faded overall tone. For those who hiss in the face of “old anime,” Nadia is a series that manages to find that balance of making characters both visually appealing and naturally tangible.

More than art, the writing of Nadia is what makes this series’s air date so obvious. While I’ve never had a long history with Square Enix or any of their JRPG franchises, I’m going to go out on a limb and say that the overall story for this anime is incredibly similar. Mysterious artifacts holding unspeakable power, a giant organization aiming for global conquest, lots and lots of sexual tension between characters of opposite genders, bumbling henchmen serving blind loyalty to an assertive leader, and outdated social norms involving men and women not understanding each other or kids not being able to comprehend the world of adults. All of this and much more awaits whoever chooses to follow Nadia through her unwilling misadventures.

Yet, there is a certain magic to this series that’s hard to place. Lots of emotional gusto (and clichés) along with the concept of life and death, increasingly bizarre fantastical elements, and an otherworldly presence makes this series exude the aura of something bold and fresh, despite how standard a lot of its foundation may seem. It actually reminds me some of the story behind the 2004 game Custom Robo, whose plot revolves around character personality and a linear, constantly building threat to humanity. In both stories, the concept of the world comes into question in a way that characters weren’t aware of, such as the concept of alien species or conspiracies kept secret from the general public. While not as extravagant as, say, the Final Fantasy or Metal Gear Solid series, there are definitely some gasp-worthy moments to behold and worlds that feel fuller due to the viewer’s ignorance to the weight of various characters’ actions.

Coming out of the final episode of Nadia left a positive impression. More than anything, both positive or negative, Nadia feels like a bonafide adventure. One can experience the relief of going from one point to another, with all sorts of notable events that transpired in-between. Characters who at first seem unimportant become recurring highlights to a certain developing “family” dynamic, one that overrides some of the stale, one-dimensional personas that exude these characters. The viewer travels with them everywhere, never straying too far from what the main characters witness and experience for the first time. In a way, it embodies the sort of refreshing freedom one receives from playing adventure games. Emotional investment becomes common nature with all these characters that, despite their one-track minds, are given ample chances to showcase how human they really are. It is an adventure, a fleeting, unsolicited ebb of something that cannot really be adequately explained through mental jargon.

Feelings of adventure and unrealized empathy isn’t enough to save the anime from its many shortcomings, however. For now, allow me to explain a two-episode stretch that made me realize I genuinely cared for these characters, both in a positive and negative sense. (The “Spoiler” tag applies to this.) Jean and Nadia are the main characters of this anime—Jean being the nerdy, scrawny boy from France and Nadia being the mysterious, quick-tempered holder of the all-powerful Blue Water. Throughout the series, their relationship is at times rocky, but always seems to get back onto level ground at some point, with Jean falling in love with Nadia upon sight. It takes Nadia a while to fully trust him and his differing disposition, aided by his unrelenting faith in her and his (sometimes unintentional) heroics. It gets to the point where both accept one another’s feelings, with the two shown kissing twice and promising to be with one another forever. They still fought at times, but again, they always seemed to look past it soon enough.

And then episode 32 rolls around.

Here’s some extra context: everything I mentioned above has already happened, and episode 32 is only seven episodes before the series finale. It is at this point where the writers decided that the gang should crash land on a foreign continent (Africa) and meet a local tribe that, at first, wishes to kill them. That is, until a hunky teenage member of the tribe recognizes Nadia’s Blue Water, which leads to the two meeting eye-to-eye, causing Nadia to fall in love with him immediately. At episode 32, Nadia employs a genuine love triangle. If that wasn’t enough, Nadia begins to ignore Jean completely for the tribe member and disregards his achievements at every turn. Why? Because the tribe member is hot.

What a bitch move! You kiss twice, pledge to one another , have him rescue you on many occasions, and he remains faithful through thick and thin. All of that becomes nil upon the appearance of a hot guy from Africa. Come on! What kind of heartless monster does that? She doesn’t apologize or even try to comfort Jean, either. She just bickers with him like always. What a spoiled, ungrateful brat! And I’m sure this seems like a really insignificant thing to point out, but it leaves a lasting impression that’s hard to erase. For some time, I despised Nadia because of these two episodes. Hell, I still don’t care for her behavior throughout the series; those episodes were just the cherry on top. Why do it? I could understand introducing a love rival earlier on when Nadia is still trying to find her feelings for Jean, but episode 32 of 39!? They’re basically a couple already! Why? All I can ask is why? What was the point? What does this add to the characters that wasn’t already established? Jean is almost stupid faithful and Nadia’s a bitch. May as well rub that shit in while it’s hot, huh? 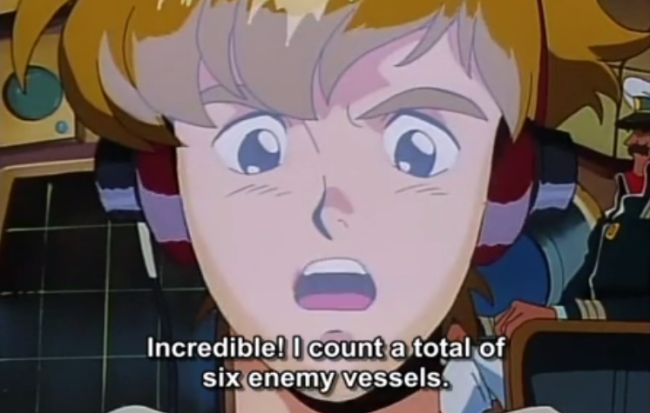 Still, it’s just two episodes, but a number of other episodes don’t do much to improve upon characters or showcase anything particularly interesting on a consistent basis. Some arcs felt stretched out way too long, full of mind-numbing hijinks based on characters’ ignorance towards one another that resulted in embarrassing, unfunny humor. When Nadia wants to be good, it can be, and its last few episodes (aside from the mountain of clichés) exemplify this. When Nadia wants to be bad, it can be pretty bad. Most notably, episodes where the quality of animation is shot. One episode had characters looking a little… off, with lots of skipping in animation, while others try and save the budget tremendously by repeating frames for, no joke, over three minutes. Episode 34 was a musical! Full of montages of characters’ past actions! What?!

For all of its good, there is just as much bad. If not for the underlying ability to care about these characters and their endeavors, this series may not be recommendable, especially noting the episode count. For what it is, it’s a slightly creative, slightly underwhelming adventure of epic proportions, epic in the most stereotypical of senses. Nadia is a lot like the standard JRPG, almost in the way that this anime could be perhaps better upon a console release, with a lot of the meat shaved off. As munchkin-ish as I make it sound, there’s a lot to enjoy with a series such as this, and I can understand its “classic” label. If one is willing to travel through the most dangerous of clichés to find an emotional treasure trove lying in wait, it’s more of a recommendation than not to carry on.

3 thoughts on “Thoughts on Fushigi no Umi no Nadia (Spoilers)”