(Recommended, once again, by Sango.)

This post will feature the series Aria the Animation, Aria the Natural, and Aria the Origination, and none of the OVAs or specials that go along with them. While I will not go over each of them individually, I will cover all three in a somewhat chronological order. The order I placed them above is the correct chronological order of events.

Longtime readers of my blog are very aware of how little I tend to care for slice-of-life series. While I find nothing wrong with them generally, they’re usually shrugged aside as inconsequential entertainment that doesn’t hold a lot of objective merit. Among my favorite titles within the genre include K-ON! and Kobayashi-chan, and neither surpass a 7/10 on the rating scale. Both are also not “pure” slice-of-life titles, employing a number of different genre clichés in both (moe and comedy, especially). “Pure” slice-of-life titles are even more inconsequential to me, as I’m not one fond of going through the normal struggles of life at a reasonable pace with nothing to go on but that. The idea itself sounds tediously dull. To this day, I don’t think there’s been a single “pure” slice-of-life title I’ve seen that made me think, “Gee, I’m really glad I watched this.”

I’ve been defeated. After all these years of thinking the genre was an overrated niche for only a small subset of fans, I have been shown the light, the beautiful, tranquil brightness that glows within the soul of a truly wonderful series. I had heard good things about the series beforehand, but I really wasn’t expecting to be this overwhelmed, especially with a slice-of-life! A group of cute girls giving gondola rides to people on a Venice-inspired plain of Mars three-hundred years in the future that offers such riveting plotlines as “Delivering mail for mailmen,” “Visiting Grandma,” and “Reminiscing about the past” ends up with a higher rating in my list than Steins;Gate, Code Geass (Season One), and Kimi no Na wa. Amazing.

However, this torrid love affair didn’t start quickly, as Animation was bit more dull than anything else. It served to lay out the foundations of character relationships and the importance of future events in a single cour, but not much else. Rather, a lot of the characters within the debut season seemed more one-dimensional in hindsight, with not a lot of attention to the more tender methods of developing the main cast as it probably should, instead settling more for the world around them. Perhaps this was a necessary evil for the events to come, but it certainly didn’t help the overall charter of amusement on my part.

Indeed, what was, at first, a pleasant but unfulfilling series of viewing a world both like and unlike our own in a different light would eventually become something of a surprise underdog. I left Animation with the promise (from Sango) that Natural would flourish into something beautiful to behold. At first, it didn’t come to fruition, but as the episodes passed by, I grew more fond of the characters, their interactions, their little quirks, and the way the series highlighted their individual efforts in the realm of their environment. All that was built in Animation was not for naught, as Natural picks up on both the strengths and weaknesses of its predecessor to make something assuredly sublime.

Origination then takes what Natural threw down, lifts it with one strong heave, and slams it upon the chamber that holds my heart and demolishes my expectations for what a slice-of-life series can accomplish. On top of receiving a nice touch-up on sleekness of design and animation, Origination becomes the most emotionally-poignant and satisfying entry in the series, and is, though somewhat rushed, among the best finishes to a series I’ve seen within the anime medium. All that these girls worked towards, all that they experienced, all that they cherished and feared and believed, finally becomes a reality—in all of its bittersweet brilliance. While no tears were shed, the rockets of empathy soared onward, as high than few others were able to achieve. 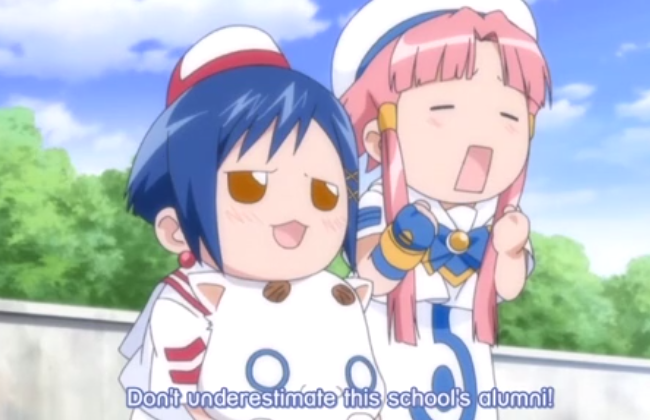 It’s truly satisfying to see these little episodes, which mean nothing on the surface, come back to become a splendorous part of the characters daily lives. The problem with series like Cowboy Bebop and Samurai Champloo is that while their episodic adventures with different characters help develop the main characters, they seem like simple memories that leave little for the viewer to care about outside of those leads’ developments. One doesn’t care for those that helped them get there. Circumstances prevent from showing more of these one-off characters, as I understand, though in Aria, they return and, at times, play semi-important parts in other situations. They becomes a recurring part of the leads’ worlds, people who care about them and give them a semblance of unity that is so, so rarely executed well. The feeling is the closest to “tranquil” as I’ve ever experienced, and Aria’s atmosphere is nothing but.

However, Aria does suffer from one very fragile (and debatable) flaw: it’s dull. It’s not always dull, but it has this very thin layer of entertainment that makes it fairly hard to fully pay attention with outside distractions. Some episodes, I’m in a quiet room with little movement and the episodes (depending on the scenario) are easy to immerse myself in. Others, someone is playing Super Smash Bros. in the background and it becomes really hard to pay attention. The slow, methodical approach to building these underlying feelings and motivations is charming, but to go from one episode to another with practically no change gives my inner desire for something exuberant, bouncy, and colorful room to complain. To have basically anything occur during, the focus becomes a challenge, and no matter how good the series is, that remains an unfortunate fact. Its slow pace can be a buzzkill for plenty. Other little nitpicks could apply to some serious criticism, though none feel worth really nagging about. For the sake of analysis, I’ll display them briefly:

All in all, a surprisingly impactful series that launched itself to my current favorite for the Summer so far. My scores for this series overall likely would’ve been higher if Animation wasn’t so middle-of-the-road. As it is, the series does a wonderful job of developing its characters, and giving their words and actions meaning to the grand scheme of things. It’s slow, unenthusiastic (relatively), and doesn’t pop outside of the leads’ hair colors. Aria does what it wants to do the way it wants to do it. Because it sticks to this plan, it ends up becoming something really special.