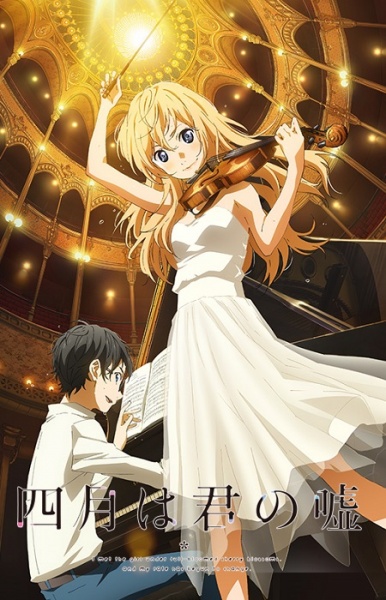 (Recommended, once again, from somewhere over the rainbow.)

Imagine, if you will, a stone. This stone has been sitting, completely motionless, on the untainted soil of a far-off rural place for decades. No fear of nature or mankind can deter the stone from moving from its spot upon the isolated plain. Resolute in its stature, it occupies the space it feels true to embody, comfortable in its blissful state of hibernation. Such time has passed and the stone never wavers—no wind so strong or bouts of irrigation too severe could stir the rock from its rightful place. Forever holding, always withstanding. The stone carries on wordlessly, motionless.

Now let me ask you a question: after imagining that short snippet, full of pseudo-intellectual musings and blunt determination, do you care at all about that stone? No, of course you don’t. Because it’s a fucking stone.

Shigatsu no Kimi no Uso is a lot like that stone, carrying forth in its stationary state. With it comes the most prominent flaw that, perhaps excusable, effectively destroys everything this anime hopes to accomplish: it’s artificial. It’s fake. It’s not real. It’s a mirage, an illusion, a decoy, insufficient in its authenticity. Like the stone, it is not worth caring for; and like the stone, it carries on regardless.

These characters, this story that they’re placed in. Their thoughts, their motivations, their actions, the way symbolic things seem to just happen out of circumstance. Everything feels so forcibly overindulgent, so egotistically self-serving that it damn near insults me that it tries to parade itself as this David among anime. Its atmosphere is repugnant, devoid of the soft touch necessary to really provoke the harrowing themes presented in a relatable and realistic tone. Very few times does it succeed in allowing what it tries too hard to evoke truly unravel in an un-condescending fashion. In short, the characters do not feel real. The setting does not feel real. Shigatsu in its entirety feels like a carefully constructed ruse to manipulate the audience into caring about puppets in human clothing. A lot of this is attributed to the writing, which is atrocious. Constantly whispering the most overdramatic cues, things that the viewer can perfectly see without the use of words—oh, how this anime adores to listen to itself speak. There’s too much jabbering, too much emphasis on telling the viewer exactly what to think and how to feel, instead of letting the imagery speak for itself. Like the author was scared that a moment without obvious self-reflection through monologue would tear down the foundation of their beautiful sanctuary of a drama. If these characters could go a single moment without thinking about how pitiful their existence is, perhaps it wouldn’t be so obvious that everything will be okay by the end.

This hostile nature shows through even more about halfway through the series, when the arc of the male lead in a sense “concludes” and focuses more on the side-characters, none of whom I care about. The exploration of the childhood friend’s attraction to the male lead is so boring, so unfulfilling that I almost wonder if I’m watching a completely different series. On its own, I wouldn’t complain nearly as much, but these characters… they’re all so mirrored by their ideals and/or character archetypes that they may as well not even try. Being that they’re a part of this series, with this writing and this atmosphere, makes their development doomed to fail—in the most melodramatic and self-introspective way possible. 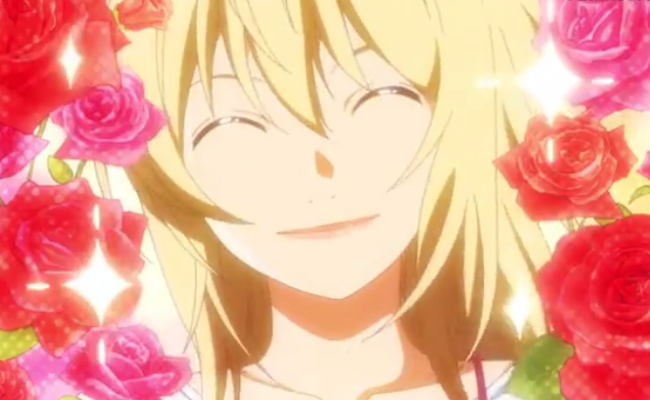 But then there are outliers: the rival pianists opposite the male lead. Initially, they’re the same manner of puppetry as everyone else, but as the series progresses and the three begin to see the way in which they improve one another as musicians, it becomes… actually worthwhile. The scene in which the three sit down and enjoy egg sandwiches together (IF NOT FOR THE WRITING MAKING THEM SPOUT UNNECESSARY SHIT THAT IS PERFECTLY OBVIOUS TO THE EYE) is actually heartwarming, and made me somewhat wonder how the series would’ve fared if they cut out the romance aspects (as in cutting blondie and childhood friend out completely) and focused on pure competition arcs. After all, the competitions were the points where the anime became… not-as-obnoxious-but-still-somewhat-obnoxious.

Despite all that I complained about previously and the still withstanding hostility present with the series, the writing and the atmosphere are the only things that really drag this series down. Large aspects as they are, they’re the only things that can be seen as major flaws with the series. Not to mention, these aspects are almost frustratingly controversial, as what I see as overdramatic, others could see as necessary. What I see as puppets for characters, others could see as characters with genuine heart and complexity. These aspects are the only things I feel can be combated with this series, at least from a technical aspect. Everything else ranges from “alright” to truly spectacular.

Most prominently, and perhaps most important to this series’s success (from a cynic’s viewpoint) is the wonderful animation. Shigatsu is a gorgeous anime, one cannot deny that. The designs are a great blend of realistic and typical anime, highlighting facial features such as lips and cheeks and what-not. Even more so, animation is fairly consistent in being top-of-the-line. When the series wants to convey the feelings of the characters, it can absolutely do so. Some of the most beautiful representations of emotions can be found here, if not trying to compete against the writing. If the series would just stop talking, a lot of these moments could become fantastically immersive. 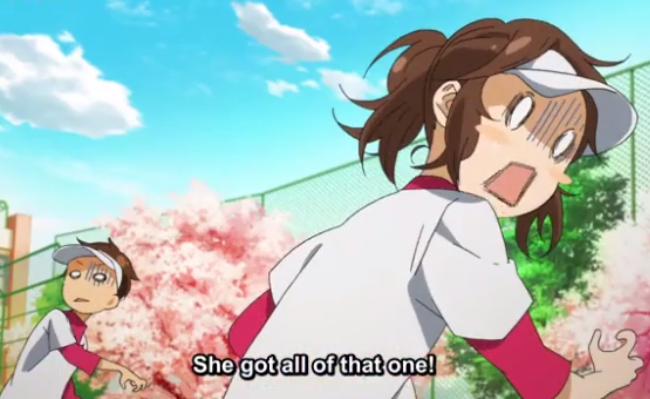 Here’s a controversial statement: I liked the comedy in this series. Well, that statement isn’t entirely accurate. It’s not that the comedy is particularly funny, but it’s spirited and animated with such energy that I can’t help but find it charming. It reminds me a lot of Miman Renai and a little of Kill la Kill‘s bouncy exuberance. Obviously the mood is different here, but it features much of the same over-the-top absurdity that makes it fun despite it. This also made me wonder how the series would’ve fared if it decided to be a slice-of-life comedy instead of a hyper-mega-force drama. Is it a bad sign that I keep imagining what a series would be like if it wasn’t the series it already was?

Essentially, Shigatsu wa Kimi no Uso is a stone that tries to become the most pitiful and moving stone to ever grace the earth. Except it’s a stone, an inanimate object, that only the biggest treehuggers would care for. Obviously, the accolades and popularity surrounding this anime makes my opinion on it within the minority, but that’s the cost of being within a demographic so keen on empathy. I guess you could say it’s THE POWER OF EMOTIONS!!! at work, performing overtime, on Thanksgiving, on every planet in the solar system.