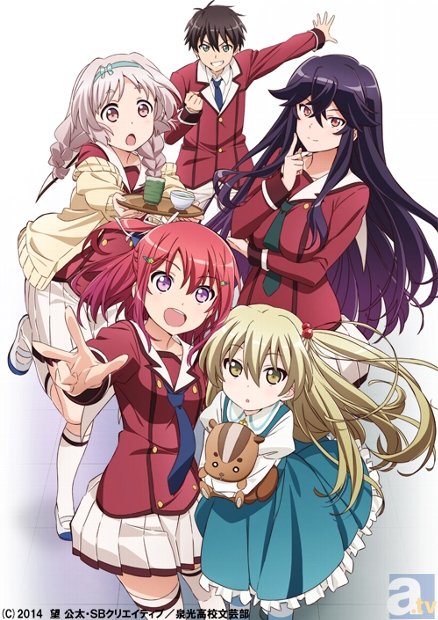 It’s a light novel adaptation. I could end it there, but I won’t.

Inubato!‘s appeal lies within the studio that produced it: Studio Trigger. I’ve said enough in the past about how Trigger seems to have a magical approach to animation that makes them stick out from the rest, notably through overexaggerated reactions and spastic movement. With this in mind, I wanted to know if Inubato! was capable of harnessing the power of Trigger’s bombast. Short answer: not really. Long answer: only in very rare instances.

Certainly gifs of this show’s brighter moments are available online to some capacity, but that’s really all that can be said about the studio’s influence. Aside from those moments, I don’t think anyone would note that this series was done by Trigger. From the designs to the movement to the behavior, Inubato! is a by-the-numbers example of what I noted somewhat earlier about the stereotypes of light novel adaptations. There isn’t anything really new here, and the synopsis of the show is a blatant attempt at cashing in on the chuunibyou craze partially started by Chuunibyou demo Koi ga Shitai!. This could be excusable if they did, well, anything with the concept, but instead employ a cookie-cutter, episodic structure of developing each girl in the harem while making the male lead look good by saying the right things at the right time… then say something stupid to reinforce the chuunibyou aspect. Screaming of repetition and basing one’s work off the success of others, a particularly foul taste is left in the aftermath.

Points can be distributed through some process of creativity, as the premise of a chuuni male lead, who believes he has superpowers, surrounded by non-chuuni individuals who suddenly acquire superpowers, could be something worth some solid development. It’s just not done in the way that could ultimately be seen as taking advantage of the potential. I’m sure some will applaud it for the way it actually goes and develops the characters, as each female member is given an episode and change to show what they’re all about and what the male lead means to them. It’s the way that it’s presented that feels so hollow, so within the formulaic confines of light novel-adapted anime that one can’t help but feel slighted. This episode is red-head’s episode, then the next is the blonde’s, then the next is the dark-haired girl’s, and so on. And then there’s this strange subplot about one female member’s brother, who is also hardcore chuuni (how convenient), where he apparently has a group of mythical beings that fights against bad guys or something? That was all lost on me, and really didn’t amount to anything in the end, so it may as well have not even happened. Rather, the brother shouldn’t have even existed. 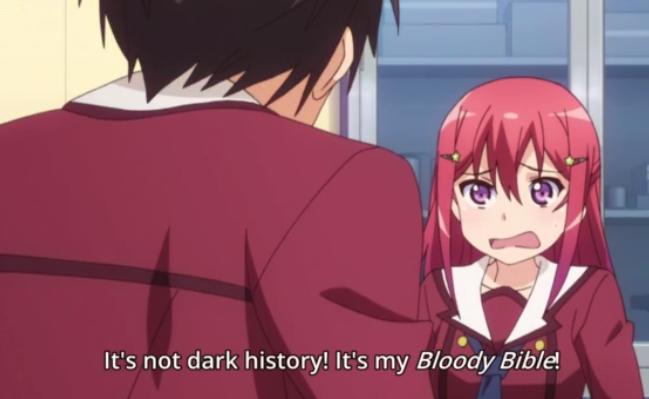 The inclusion of one character’s chuuni brother is only one aspect of the anime that seems out of place. The fact that the characters have superpowers at all doesn’t amount to anything. They almost never use them and aren’t brought up as if it affects their lives whatsoever. Why even give them powers if they’re not going to use them? Why are all of the characters so perfectly-moraled that one of them can’t think, “Hmm. I wonder what I could get away with with my power to FREEZE TIME?” That’s the kicker; these aren’t just dumb powers, either—they’re amazing powers that could give them the ability to change their lives for the better (or worse). The blonde girl can create anything! Are you serious?! Create a trillion yen! Become rich! Help the homeless! End world hunger by making a million McRonald’s! The sheer magnitude of what they’re capable of is lost on them, and what could have been an incredibly appealing narrative of what they could do with their powers is wasted on some fart that says a lot of stupid things being nice to them and making them realize that all boys have to do to be loved is be a nice guy. Sorry, my prejudices came out.

Just a horrible waste in potential, though I didn’t expect much from it regardless. It’s as the very first line states: it’s a light novel adaptation. The stereotype stands and sucks yet another product into its void of emptiness.