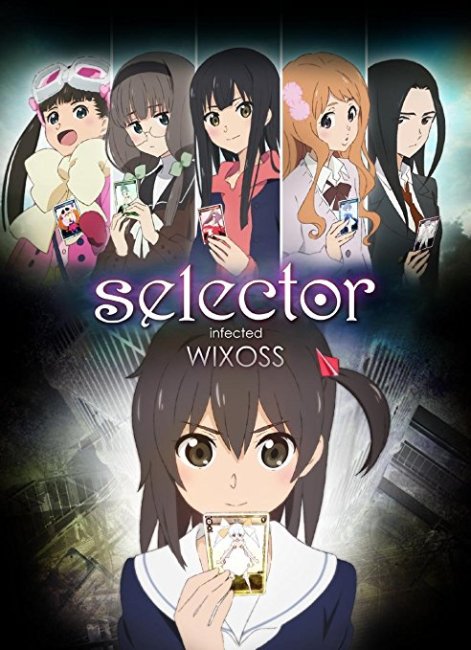 (Recommended, once again, by a coasting chatter.)

I’ll say this outright: WIXOSS is a s-y-m-b-o-l-i-c series. An anime dedicated to evoking the imagination of those looking for something a little deeper. We get the impression one would get from a card game anime—lots of shounen shouting matches and cool-looking creatures fighting under the player’s whim. Here, there are stakes to the game, something along the lines of Sword Art Online’s “You die in the game, you die in real life,” except not upfront. There seems to be a lot of direct inspiration that makes WIXOSS a culmination of different things, yet holds its own as a series constructing its own path by questioning what would typically come from the genre.

The story of a game, where players (though more popular with girls, for some reason) fight each other with specific “magical girls” of sorts to eventually have their deepest wishes granted. Of course, not every player gets this luxury, as only the “selectors” are given opportunity to make those dreams a reality. Everyone else just sees it as a fun game endorsed by celebrities and the like. To those selectors, it’s a game that will eventually give them freedom.

Part of the issue with this series is that one of the most integral aspects of a card game is to have a clear focus on rules, power level, and skill differentiation between veterans and newbies. WIXOSS has none of this, as the “rules” for the card game are incredibly vague and dumbed down to “Magical girl ‘grows.’ Attack and hope they win.” It’s really nothing short of the inevitable POWER OF EMOTIONS!!! that come with teenagers and magical stipulations. The female lead is amazing at the game because she’s special and everyone else wins or loses whichever is convenient to the plot. At the same time, there’s a nudge towards the viewer that the focus of the characters and their motivations are more important than the battle itself. Such that the battle is more just a representation of the character’s will than a straightforward game with needlessly convoluted twists and turns. Some would be willing to look past this, others won’t. I’m somewhere in-between.

Another issue is that the series is rather easy-going, picking up only around episode four or so. A lot of downtime can easily induce some insomnia relief, especially if one doesn’t attach themselves to the characters immediately. That being said, characters have more or less a realistic representation of the reality they’re set in, but none have really a distinguishable personality set to them. The female lead is somewhat reserved and good-natured, her eventual friend is a tad spunky and quick to emote expression, and all of their rivals are insane. I won’t go and say these characters aren’t realistic (except the insane rivals), but they aren’t exactly amazing people, people which one can empathize with without the effect of a tragic situation. Following them around before the major plot points reveal themselves feels more like an eventual falling action, rather than something endearing to miss once the falling begins.

It is also—though almost inevitably—a little on the overdramatic side. Again, insane rivals. Literally insane. Speaking in cutesy voices only to threaten other people with knives when they’re humiliated. Smiling seductively as the battles rage on as though it turns them on. There’s a level of humility a series can employ that WIXOSS flirts with to only a minimal degree. It’s certainly no Kiznaiver or Shigatsu wa Kimi no Uso, though one can’t help feeling overwhelmed. One can understand the weight of the game on its users, all of whom (except one) have a desire they feel they must have or die trying. I can’t help but think this should’ve been with adults rather than teenagers, because seeing a kawaii little teenybopper pull a knife out on people just makes me laugh. Oh, and that thing I said above about… y’know, the exclamatory remark about the strength of the human emotive system.

With that, all of my issues with the series are covered. Now let’s talk about the good: IT’S NOT A STUPID ALTRUISTIC MESS. Dear Lord in Heaven, it is so refreshing to see a series initially pander towards that direction only to have the rug slipped out from underneath. I’m starting to remember why Madoka Magica was so well-received; not just because it tried to have an involved narrative, but because it was something different. WIXOSS is something different. Paving the way for intrigue and thought-provoking ideas that others take for granted. Granting wishes? Yeah, cool. But what if the wishes were stupid shit that one could likely do with actual effort? Are they using this game as a means of escaping reality? Is one really so gullible to trust everything as a talking head within a card is telling them? Can one be altruistic and at the same time self-serving? These things and more are explored here, in this deliciously wrapped (and open-ended) season of flipping expectations.

Now, don’t let this one paragraph dissuade you from everything else I said above. WIXOSS is far from a fantastic series, but it serves as the foundation of a series that could be great if handled correctly. It left more of a positive impression than a negative one, however overall, I can’t say the series isn’t flawed. Animation and design aren’t even really that appealing, even in those typically interesting dream sequences foreshadowing later events or battles involving fantasy fodder. There’s nothing entirely wrong with the aspect, it only doesn’t stand out. It’s serviceable and nothing more, much like the initial reaction to this series when it first aired (see: average rating on MyAnimeList). In hindsight, though, when even ThatAnimeSnob is championing the series as a modern… well, not “masterpiece” but something that should be praised, then perhaps there’s something there.

As it stands, it’s a decent series, though I shudder somewhat at the thought of continuing it, as I hear nothing but “it gets worse” from those who moved forward. I adore its willingness to try and showcase something more than its genre would dictate. If more series would take that leap, that would be more than enough to have hope for the future. And with a whole two anime about card games under my belt, I think I can officially say that WIXOSS is my favorite one!