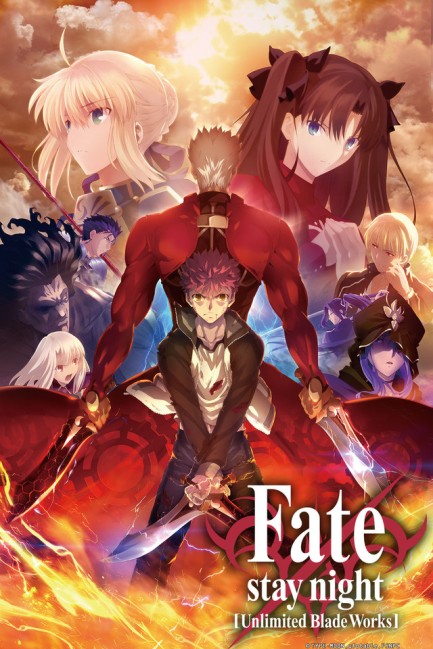 (Recommended, once again, by an unnamed lurker.)

First things first, allow me to apologize for the lack of posts/anime viewing recently. I took an unexpected three-day hiatus from the Summer to recover from a hefty plate of “irl overload.” Secondly, allow me to apologize again as this post will be short and sweet. My internet is being unkind to me at the moment and I want to keep the anime train rolling without a hitch.

Fate/stay night (UBW) is an overall okay series. Not great, probably not even good, but “okay.” It employs a lot of what one would expect from a fantasy battle shounen with a little extra in the art/animation and narrative departments. As such, the popularity and/or fanfare behind this anime is likely due to everything syncing up in exactly the right way to touch upon the general mass’s love of all things shiny, fantasy, and serious. Somewhat cynical, yes, but when many of the top-rated anime on such databases all employ these scenarios, they tend to blend together, especially to a veteran of the medium such as myself.

Fate/stay night (UBW) seems like something of a follow-up to Fate/Zero’s massive success, taking what they felt worked from the former series to recreate the sequel series originally made many years ago. In this sense, they do a mediocre job, as while the dialogue is still eloquently put and morally gray, they end up saying far too much to say one simple thing. “I am altruistic! Monologue with me as I tell you all about how altruistic I am!” “You are naive! Altruism is dumb! Monologue with me as I tell you why I feel altruism is dumb!” It doesn’t have the same impact that Urobutcher’s writing style allowed in the aforementioned Fate/Zero, but on its own, it still has more charm than many others of its kind.

What surprised me more than anything was how much I actually cared about the characters. Aside from Emiya, because “lead male protagonist” is all that’s needed to describe him, characters have a little depth to them that I wasn’t expecting. Rin particularly stole the show with her constantly changing attitude, cunning, and sprinkle of tsundere archetype. This certainly helped me to follow along with the more intimate details, and I was even more surprised that I started to remember aspects from Fate/Zero as the story continued along. A nice touch to sprinkle in some nods to the previous work. Though Gilgamesh isn’t as… “likable” as ten years prior.

A perfectly decent series worth recommending to people who like the battle shounen genre. It has enough insight to the characters and a typically constant tone that makes it engrossing almost throughout. There’s a little too much emphasis on THE POWER OF EMOTIONS!!! and overindulging in dialogue to make it a truly worthwhile experience, but still manages to keep itself afloat on an even basis. I’d recommend Fate/Zero over this, however.