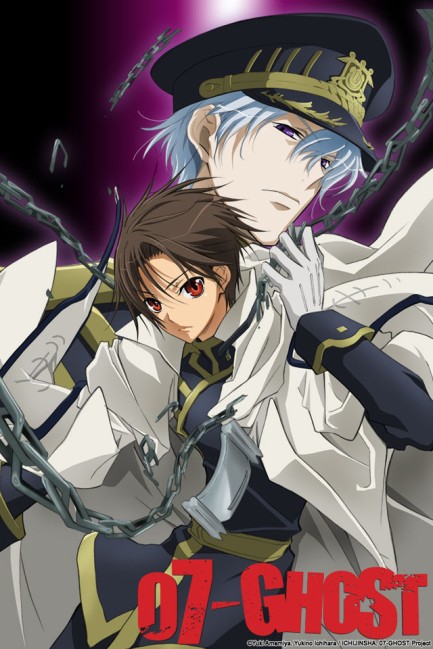 Instead of ending the Summer on a long, explosive note, I’ll end it the way I feel it deserves to end: lazily, mirroring my own drive at its last junction. Unfortunately, my motivation to stick with the self-imposed rule system of this year’s festivities left me in a weakened state of misery by the end. It felt like a job—this really shouldn’t feel like a job.

With all due respect to Karandi, who may have recommended this to me with the utmost earnest, my hands are too drained to give this series, which ended up being another dull drag, a proper analysis. Instead, the next few paragraphs will only linger upon what the series has left me to ponder upon.

07-Ghost is a lot like Bungou Stray Dogs. It is also a lot like Pandora Hearts, and a number of other series with the same aura to them. Series that are, at their hearts, very serious pieces that typically revolve around fantasy plots, which occasionally employ over-the-top character quirkiness to combat the ever dark tone and feature a large cast of good-looking male characters—some of which are fairly intimate with one another. Not quite bishies, but semi-bishies—male characters with bishie-like qualities. All the aforementioned titles flirt with these characteristics, creating a vibe that feels somewhat foreign to me. It goes without saying, but these titles simply don’t interest me. That much should be obvious with my overall disinterest with both Bungou Stray Dogs and Pandora Hearts.

What isn’t necessarily set is the type of impact these series can have, as while Stray Dogs has a generally negative view in my mind, Pandora Hearts has a more positive image. 07-Ghost is of a similar vein to the latter, though admittedly in a more dull sense. Things that occur, characters that receive screentime, events that occur… all ring very familiar to others of its kind. Not to say these aren’t good on their own, it simply ends up being a little worn by this point. My interest varied between gradual interest and minimal boredom. It at least held my attention.

As such, I’m going with a safe rating. Its quality is understandable for those who wish to follow through, it’s just nothing extraordinary. Nothing I would willingly recommend, but can see why others would. If there was any true enjoyment I received from watching, it was a single scene that reminded me of a skit from The Whitest Kids U’ Know. Absolutely unintentional on their part, but it gave me a hearty laugh. That doesn’t technically count as “an anime making me laugh.”