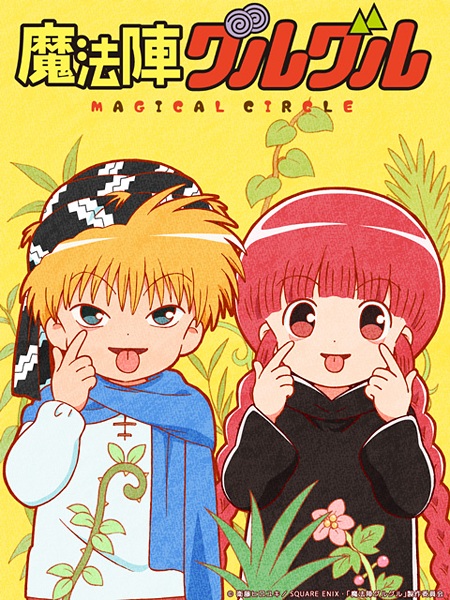 Six episodes in, it rekindled my appreciation for occasionally lowbrow parody anime.

Sometime in the lost years of my innate weebness, I would watch an anime by the name of Bobobo-bo Bo-bobo every week on Cartoon Network’s “Toonami” block. Initially, I found the show immensely entertaining, though as it went on I became more interested in “serious” anime, such as Naruto. Hehe. Mahoujin Guruguru reminds me quite a bit of Bobobo, though while the latter’s absurdity overtakes everything else, Guruguru has the awareness to remain both serious and non-serious, with priority being given to whatever feels necessary. The first episode was nearly perfect; introducing things light-heartedly while also establishing the inborn bond between the two lead characters, the only thing that made it better was the satire of classic JRPG scenarios. Needless to explain further, satire is something I can get behind in series.

Normally I would complain that a series mixes serious and non-serious vibes too earnestly for one to be able to take the serious moments seriously. One only need to reread that previous sentence to realize how serious I am about it. Within satire, however, it’s easier to justify, as the viewer is under the impression that a lot of it shouldn’t be taken seriously anyway. Nichijou isn’t technically a satire, so when it tried to develop its characters (in the little time it chose to), it only worked minimally due to the outright bizarre scenarios hogging all of the attention. This also applies somewhat to Guruguru, as it is prone to making serious plot developments within non-serious situations, which makes it lose a little of its magic. Yet, it’s the fact that it tries to deepen the relationship between the two leads and their desire for adventure and fun on a semi-consistent basis that makes it so fun to watch.

Is the series funny? Not usually. Guruguru has actually managed to make me chuckle twice, which for those who have read my blog long-term know is an accomplishment in and of itself. Occasionally lowbrow humor, much like one would find in a kids’ show (potty humor, especially), is accompanied by anime standards, like the Straight Man set-up and random zaniness pushed to extremes. I actually find my favorite parts to be when the male lead is taken by his lust and constantly halts everything serious so that he can gaze upon the female body with the most grim of expressions. I’ve always been fond of the “seriousness” behind the male’s desire for sexual intimacy in anime. The most I could say is that the series is consistently humorous.

Another consistency is within its design, which is so vibrantly varied (though less so later on, sadly…) that one can’t help but appreciate what it’s parodying. Simple, chibi-ish designs that every so often spur into random changes in aesthetics to emphasize humor. Pixel-animation is also used quite often, which speaks to me on a personal level. Pixel animation is best animation. In-anime text boxes will also spring up randomly, further emphasizing the parody aspect, which altogether makes for a dazzling display of heart within its goofiness. It doesn’t hurt when the general aesthetic for the show is clean and bold, making every character and creature poignantly placed in the world around them. And within the satire genre, it allows animators to get creative with the presentation… while also justifying their need for shortcuts on occasion. 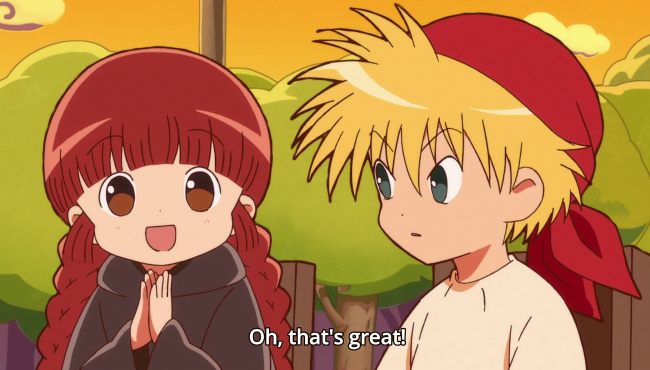 Should there be one core issue to the series, it’s that despite its consistency everywhere else, the only thing it’s not consistent at is delivery. It’s first episode was magical, and I was ready to crown it MVP of the season right then and there. Since then, it’s floundered a tad, flip-flopping between good and decent so long as the type of humor changes and its serious aspects begin to overpower the satirical nature. At one point, near the halfway mark of episode five (I believe), I was actually somewhat bored, as it was ankle-deep in a muck of seriousness that I didn’t think fit the show. It’s at its best when it uses that seriousness as a back-up option, rather than employ it at the first sign of trouble.

I have high expectations for this series knowing that it’s a two-cour adventure. Quite a lot can happen in that span, and for the time being, it’s used its time wisely enough for me to aptly recommend it. Unfortunately, the manner of decreasing charm is starting to rear itself, so perhaps the heaps of praise is but a precursor to serious criticism. Time will tell. Until then, I will marathon this adventure between light hero and dark mage until it kills me. Pleasurably.