Impeccable as it is, this film has none of it. No filler, no filibuster. It moves at paces ranging from a bird flying in the morning sky to a snake slithering in the desert sand, yet it does not stop. Always moving, elegantly presenting events that capture some underlying force or ubiquitous mood which keeps the stew boiling in the darkness. That may very well be what I appreciate most from this picture; that it does not do anything to grope you around through heaps of mindless serendipity and glamour. No distractions from some obvious flaws or cute side swipes to appeal to a wider audience. Blade Runner 2049 does what it desires to do with such automated grace that it implements the stylistic intricacy of John Wick’s action sequences and employs it to every other aspect but that. Absolutely. No. Bullshit.

This is what Disney’s Star Wars could’ve been. Had it not been for all of its profound bullshit.

The original Blade Runner was a film dedicated to asking the questions without relaying any obvious answers. Nearly everything was shown, and not once told (at least not explicitly). This created an isolating effect between the viewer and the film; such that it felt more interested in serving as a cinematic enigma of sci-fi psychology and existentialism. Like being presented with a Rubik’s cube with no colors on any side, and being asked to solve it. Intriguing as it is, there’s no context to care, and little reason to identify with the struggles of its characters, aside from what is innate within humankind to be empathetic of those who only wish to survive—and to live among their own freedom. An island’s worth of style, but substance? Debatable.

Blade Runner 2049 may have single-handedly convinced me that characters are the greatest asset to film or any other similar medium. As toxic as the term “linear” has become in this day and age, the narrative structure of choice here is undoubtedly so. The choice to employ a more straightforward story is something that will no doubt alienate some from this sequel film’s roots. Yet it is a choice that is one of many choices that I not only find to be a true strength, but one that I would rather not have differently, despite other possibilities. It is so that standard structures can harm the worth of creativity, but it may also compliment all that which surrounds the structure in a more fulfilling fashion.

For it is the characters that make this movie what it is. What makes it so powerful, so transcendent in its mental capacity that one can only hope to collect all that is offered in a single sitting (I needed two sittings to write this review with confidence). For the things that the original wanted to convey, it didn’t have the proper connection between viewer and character to connect that link of ultimate empathy, the key to any true experience of extravagance. “Joe” is not only interesting on his own, but his condition, his context, his origins—everything so clear-cut yet shrouded in delicate mystery—become interesting as both he and the audience discovers more as the story unravels. Deckard in the original already had the benefit of knowing so much, being within a position where it was hard for someone without that context to surmise his thoughts and actions. With “Joe,” he’s far less human, far more empty in both humanistic characteristics and input on the larger aspects of his own “soul” that to build upon his knowledge along with him creates an experience that truly puts one in the midst of the dilemma. Immersion is no issue here; even if it was, the aesthetic presentation will alleviate that by itself.

Though what helps in Joe’s development as a character and source of human connection is Ryan Gosling’s performance, which, in my humble opinion, should garner him every award. All of them. What are replicants supposed to be? How are they supposed to feel? Baseline; no distractions, no bias, no physiological or psychological fluctuations. Ryan Gosling is stone-faced for a good portion of this film, flushed in the embodiment of a character that is not expected to feel desire or passion. Yet it is the subtler movements of his face, the slow accumulation of tears flowing in his eyes, the sudden, one-time burst of ferocity, that really brings “Joe” to life. With more time comes more opportunity for him to question his capabilities and his “humanity,” masterfully performed by Gosling. His mannerisms alone provide a spark of residual intrigue into every scene.

Thankfully, it is not just “Joe,” but a variety of characters that allow further insight into the plot and basis around the world presented in 2049 to flourish into a sea of conflicting moods and ideas. Joi, Luv, Deckard, and those whose names aren’t even important (as ironic as that sounds given their importance) all help present the importance of character within not just this film, but films in general. There are complexities, multi-faceted personalities to every character, and the way they bounce off of one another creates not just an interesting connection, but a realistic connection. Connections that transcend the standards of machines with human clothing. And the fact that some of these connections even exist says more about the characters than the interactions themselves.

Joi, for example, is the cybernetic encoding system that projects and mimics the personality and mindset of a real female partner—perhaps the “model girlfriend” would be a more accurate description. She, as a character, is worth liking, as she is programmed to be liked and irrevocably loyal to “Joe,” but she isn’t real, and oft-times throughout the film it is shown that she is simply a projection of everything “you” want to see and hear. I’ve seen various critics criticize Joi as a self-indulgent submissive female stereotype, and that through her desire to be real to Joe, the film becomes inherently “creepy.” Through my take, all I can say is THAT’S THE POINT! Joi isn’t real, but Joe wants her to be real, because he wants something real. He’s both submissive to the idea of having someone who loves and supports him while ashamed that he may never have that feeling of genuine connection with anyone aside from a company that manipulates that. It’s. Character. Building! Further acknowledgment that his humanistic desires are beginning to envelop his cerebral duties as a baseline “retiring” machine. Joi is, in a sense, a scapegoat to further build upon the ideas of the plot’s presence and the intricacy of the lead character’s inborn desires.

I could go on for hundreds of thousand of words about the characters and what they mean to the story, what each line could possibly allude to or how it all connects to the larger summary, but I’ll spare the reader my uncontrolled ramblings. What this means to show, however, is that the world within Blade Runner 2049 is filled with detail and substance, something that isn’t quite as noticeable in the original picture. Every scene, every character, almost every line has some deeper meaning to it. Packed with a keen sense of direction that seems to lead to a multitude of different destinations, finding every piece of the puzzle is as much an experience as the film’s surface messaging. That, I can absolutely believe, can be a hefty and off-putting task for the casual viewer. Not quite as much as with mother!, but enough to warrant those who fear the mounting expectations that become noticeably gargantuan within the first fifteen minutes of the film a passive regard.

Profound characters, a straightforward, yet immersive story. What more can one ask for? Why, captivating visuals and atmosphere, of course! Indeed, the colors are not vibrant as, say, Guardians of the Galaxy, nor are they as focused on grabbing one’s attention. The tone of 2049 is intrinsically dark and depressing; a dystopian world full of casual pleasures and leisure, without a shred of empathy or individuality. Everything is, as already said a number of times before, clear-cut, meticulously organized, and gray. Everything is in the state of decay, the death of humanity itself, or its drive, should one prefer. It makes the more focal points of color, whether the red lights of a police cruiser, the purple-pink skin of the projection of a nude female advertisement, or the orange mist of an abandoned city full of radiation, far more instilling. What 2049 manages to do, apart from creating a visual world that shows the capabilities of current-generation special effects, is embellish the more bombastic features by showing patience. When one is accustomed to three hours of special effects, those effects are no longer special, but a norm of the visuals. Here, those pinks and oranges and reds glow with an intermittent fascination that reminds the viewer of what it means for effects to be special. 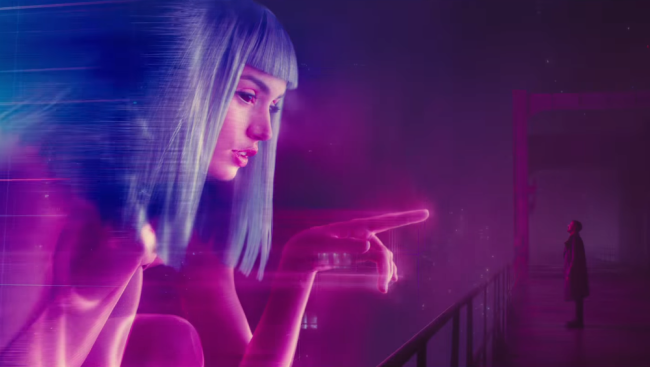 Last, but most certainly not least, is the soundtrack that accompanies the film, taking a fairly similar lead as the special effects. It picks its moments of heightened hostility and intensiveness. Silence is not often heard through this film, though it is most certainly very quiet. The action scenes are as far and few between as the music that accompanies them. The most scandalous realizations are accompanied by harrowing, mind-numbing impacts of heavy synthesizers and sheer volume. Not only setting the tone, it sets another course for the story’s direction, and the mood of a character, and the breaking, the recovery, the peace, the frustration, or the reconciliation of a person. So simplistic in its nature, the heaviness of the soundtrack becomes heavily embedded in the already masterfully-woven intricacy of the film’s core parts. Everything plays a part and works beautifully together to not only provide insightful think pieces, but valid entertainment as a whole.

There are things about this film that many can criticize, break apart, or question upon the logical foundations with which it means to present itself. Perhaps the pace is too slow, the violence too prevalent, the diversity too white (Ha!). For me, and the way this film evoked the inner workings of my emotional turmoil is something that cannot—and will not—go unnoticed. Much like my most treasured possessions of the visual medium, in which my memories paint the perfect, picturesque brilliance of a modern masterpiece, Blade Runner 2049 is, without any single shred of doubt—two times over—the closest a film could ever be to perfect in my mind. Production values, character intricacy, narrative potency, atmospheric sincerity; everything and more is there for me, for you, and for anyone to indulge in to their utmost pleasure. And I, as one who always clamors to share my wondrous, oft-times contradictory feelings, urge anyone reading to not only watch this film once, but twice or thrice, so that one can experience what it means to truly be in the presence of human passion.