Over the years, phrases such as “It’s too bland,” “It’s dull,” “It’s safe,” and “It’s formulaic” have been ingrained into the wordy musings of this blog. While I can’t speak for everyone, I can only assume that when I say these things, people think I mean they’re boring, bland, or formulaic in a general sense, when in reality, they’re all those things largely due to a single driving factor: expression (or sometimes referred to as “heart”). Now, something as vaguely termed as “expression” is a bit tricky to pin down in an objective sense, so as a small, yet effective example, simply look at the cute gif I have posted above of my favorite vampire waifu: Shinobu, from the Monogatari series. Notice the blended array of colors which supplants it out of its immediate reality, the emphasis on her allure being planted right on her face, and the almost cutesy representation of her original design that creates a distinct mood. This is what I like to call “expression,” something that exaggerates, defies, or simply heightens the norms of character exuberance and/or personality—which bleeds into other aspects of a creative work.

While this post is looking at anime, other art forms such as video games, manga, and films all work within a similar field, where expression can become a make-or-break factor in terms of my enjoyment towards it. Take a recently-crowned favorite manga of mine, Miman Renai, and the infinite amount of gush I wrote concerning its artistic chaos. Despite a simple story with inherently semi-problematic reasoning and characters who only briefly cross into territory that accentuates their complexity, the manner of expression and artistic freedom made me adore it to near-maximum levels. Silly faces, absurd observations, Egoraptor levels of emotional and physical overexaggeration, and an earnest atmosphere that coddled it all in a coherent space without (completely) destroying the confines of reality. This is by far the greatest spectacle of Miman Renai as an art form and a golden example of my love for “expression” in visual media. 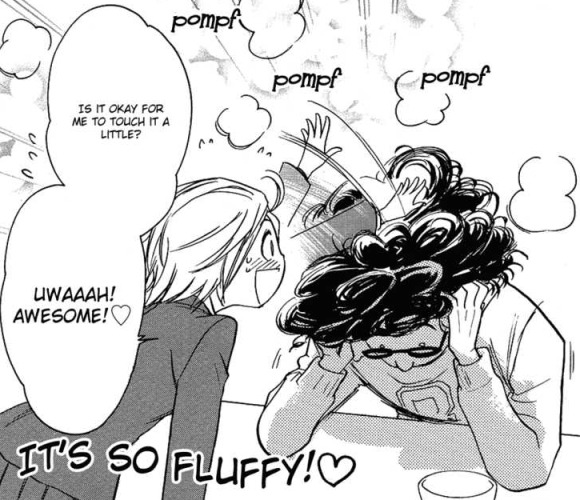 Taking into account my favorite anime, most of them have some form of expression to them, with the most vibrant of the bunch being Katanagatari (from the author of the Monogatari series, which isn’t shocking). Its entire aesthetic is bright and varied, with quirky character designs and a world with blown-up color. Best of all, its characters are hilariously one-dimensional, but in a way that screams parody rather than conforming to what sells.

However, my other favorites being Dennou Coil, Ookami to Koushinryou, Toradora!, and Shinsekai yori, someone reading my thoughts thus far wouldn’t be able to see what makes them so rife with expression in the way I’ve explained it to mean. And they would be right, because these other examples aren’t anywhere close to the absurdist levels of Katanagatari, but this is all surface-level stuff. These series’ expression is within the manner of their character progression and insight, such that they change gradually throughout the course of the series while still retaining the better parts of their core personality. Admittedly, Ookami to Koushinryou does not have a lot of what makes typical expression so infatuating, as it has a higher degree of focusing on an aloof narrative structure that simply embodies the relationship between its lead characters and THE POWER OF ECONOMY!!!

Dennou Coil and Shinsekai yori, on the other hand, have another form of expression that aids in the development of both characters and narrative: artistic expression. Essentially, these series have “a point” they’re trying to make, or trying to envelop the viewer into a grandiose tale that one can empathize with and gather insight on various circumstances (i.e. loss of loved ones in Dennou Coil; social hierarchy in Shinsekai yori). The way the story is presented also plays a vital part in its retention of intrigue, which each series does splendidly enough to draw attention initially and reap rewards by the end; childlike adventure in a sci-fi setting with Dennou Coil, and the dangers of repeating the past in a fantasy setting full of telekinetic kids and anthropomorphic mole rats in Shinsekai yori. These stories with meaning are something that makes them intriguing to watch analytically as well as simply for pleasure. It also makes them more memorable for their inherent quirks as those without them. It’s part of the reason I gave mother! a good score despite not caring for it, and gave Mayoiga an average score despite its glaring technical flaws.

Yet not all is fine in dandy in the world of youthful naivety and cheeky children. Shounen anime are among the most exuberantly emotional anime on the planet, with episode after episode of monologues and screaming dialogue full of gusto and usually a lot of angst. This, in terms of what I’ve said, could qualify for an example of expression, and I would agree; however, with almost everything in life, execution is the name of the game. It is not expression alone that is what makes itself alluring, but the way it is the presented, the way it inflates itself with value, and the way it distinguishes itself from the crowd (or other ways that mean more to others than myself). Boku no Hero Academia is a great example of expression used in a very similar way to many other Shounen titles, but creates more meaning through focusing on characters by putting them in eventful situations and giving the viewer a reason to not treat them as background filler. The execution is not distinguishable at all, yet it works through tinkering—giving weight to one’s actions, and having that result in true character development. Because let’s face it, Boku no Hero Academia’s story is not nearly as captivating as its characters. Here, it works, while in other series where the focus is more driven towards narrative, it likely won’t work as well. Context is important, as one should be able to identify what a particular series is trying to do and why its type of expression works as well as it does.

Which brings me to the obligatory “Trash all harem and trend-baiting series” section of the piece. Series such as Rosario + Vampire, No Game No Life, Blend S, and Urara Meirochou all have a common fatal flaw: there’s no point to them. They indulge in what’s popular at the time for the sake of indulging in what’s popular at the time, putting no effort into any real stakes of human interest or conflict. While all are vibrant in their color palette, it doesn’t mean much when the execution is so derivative and void of impact. This isn’t to say these shows are (altogether) bad or that they can’t be entertaining to viewers (Lord knows No Game No Life is), but that they lack that sort of “oomph” (another word that mirrors “expression”) that keeps me interested long-term or invested in what’s happening onscreen. Their level of expression is fairly low in my eyes, which makes me immediately shy away from them if not for my allure to their easy-on-the-eyes design. And this applies to any anime that may or may not catch my interest in upcoming seasons. There’s a reason why I only watch two or three anime a season: the rest don’t scream, “Oh, yeah. That’ll be expressive and not super cliché.”

When it comes to anime, titles such as Ping Pong The Animation, Kuuchuu Buranko, and Jinrui wa Suitai Shimashita are going to be infinitely more interesting to me than Free!, Hajimete no Gal, or Monster (Sorry, fans). Their uniqueness, expressiveness, and potential for meaningful content are what draws me in more than simple fan service or a super-realistic plot full of normal characters. Again, this isn’t to say the latter series can’t work, but it doesn’t do much for me personally. I am, or at least I am developing into, someone who enjoys a blend of “objective” solidity and artsy-fartsy development or imagery. URAHARA was a series I had high hopes for due to the artsy-fartsy discretion, but the “objective” side faltered fairly quickly. It doesn’t always works, with execution and situation playing as much of a role in its power than the power itself. When it works, you have a crowded mess of eights and above in your anime list. When it doesn’t, your average rating per series hovers around a 5/10.

That’s what being expressive means to me. What does it mean to you?

One thought on “My Adoration of Expression Coupled with Anime”