I would also like to state before continuing that this post will not cover the Divine Beast or the things pertaining to its conditions for entrance. I will dedicate an article to the Divine Beasts in general at some point in the future.

At this point, I had enough experience with the game to have some confidence in my ability to overcome any challenge. I knew how to cook stuff, effectively decimate any enemy, had full control of Link’s mannerisms and weapon abilities, and while it’s hard to explain to non-gamers, I just had that feeling of “This is my domain” while playing it. That sort of unsaid and often times unnoticed quality when a game simply becomes second nature, where one doesn’t have to remember how to do something or what that something does. After Zora’s Domain, I was deep enough in the adventure to have myself be comfortable with the road ahead, with little hesitance lurking within me.

Funny that I happen to pick the volcano right after the luminous lake. Almost like going from Kyogre to Groudon. Yin and Yang. Of course, I knew that was where the Goron lied, and the Goron have always been one of my favorite LoZ species. The path to Goron City, or Death Mountain, was one I found to be even more perilous than the path to Zora’s Domain. Two major reasons for this: one being the heat, which requires a few bottles of heat-resistant potion to travel across safely (Pro tip: speaking to an inhabitant of a stable before the path’s start will net you three of these potions for a low cost). The other being that there is a Guardian walking around the path. Not the ones planted to the ground, but a fully functional, spider-like Guardian that will wreck your shit if you’re unprepared. I, like the unprepared player I was, avoided it at all costs, which I managed to do by exploiting the fact that Link can damn-near climb anything.

Otherwise, the road to Goron City is laced with lava pits, red Lizalfos, fire Keese bats, fire Chuchus, and fireballs that rain from the sky (easily avoidable and incredibly situational). Basically, fire, fire, and more fire. Wooden weapons are going to be one’s downfall and ice arrows will be your safe bet. Unlike with Zora’s Domain, one doesn’t even see a Goron (aside from a traveling merchant) until one is about a five-minute jog from their major capitol. It creates a sort of isolated distinction among the species that, while I found curious at the time, realized it’s kind of the same for every major species aside from Zora, so it’s not that interesting anymore. Speaking of not very interesting, here is where the bad starts to flow. 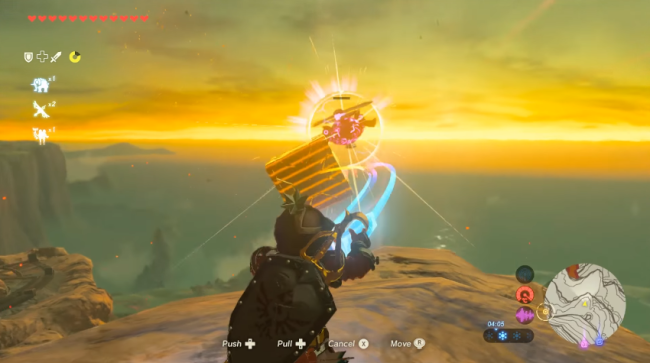 The “Sidon” of Goron City is a weak, sniveling coward who is a direct descendant of Daruk, the token guardian of Goron City. His character is a by-the-numbers caricature of the “Weak coward eventually becomes stronger by overcoming adversity and showing courage in the appropriate manner” trope that has become so overdone by this point that I couldn’t help but despise him. It doesn’t help that his voice is horrendously annoying. It also doesn’t help that on top of the trope of “Weak coward becomes hero,” he also has the trope of “Weak coward is the direct descendant of a natural leader and species icon—ISN’T IT IRONIC???” At the very least, the conversations with Goron around the city don’t kick him while he’s down with gratuitous lines of “He should be more like his great grandpappy and stop bein’ such a puss!” That would’ve completed the cliché cannoli and ruined the experience almost altogether for me. Needless to say at this point, the narrative surrounding this particular area did not excite me all that much.

Here’s an embarrassing fun fact: this was the only part of the game (aside from near-end Shrine hunting) where I looked up a guide on how to progress through the game. It involves the process of boarding the Divine Beast, so I won’t go into much detail, but we’ll just say that my perception can be hilariously lacking in various moments. I’ve found in my lifetime that I can become so taken by the objective at hand that my peripheral vision becomes essentially moot, never piecing together the importance of various circumstances surrounding the objective unless I actively think about it from that perspective. I’ve found myself trying to think more outside the box from this instance alone, but it can still hamper me in puzzle games. But this has little to do with the topic at hand. The point was to show that this part of the game may be hard for those who can’t figure out context.

Aesthetically, there’s a little less variety here than with Zora’s Domain. There’s Death Mountain—an active(-ish) volcano—and mountains that accompany it, lava streams, rocks… mines… Yeah. It’s just a big mountainous region with the glow of lava and a heated, semi-dusty atmosphere. I think it more than justified the feeling of heat, but didn’t do much for the immersiveness of the Goron like in prior games. The Goron themselves are definitely varied in appearance and personality, more so than the Zora, but the world around them becomes all the more dull. Aside from the mining area, there wasn’t much of a sense of the Goron interacting with their environment, with all of them being placed there for convenience. The world didn’t come alive, and became one of the least enjoyable places to revisit for me (until a certain other area I’ll get into later on).

I ended up a little disappointed after leaving the Goron zone. There wasn’t as much personality present as I would’ve expected from a fun-loving species. That, and the overabundance of clichés made me groan every time they attempted humor in conversations (Ha ha, the old guy’s back always hurts!). I wouldn’t say the majority was an overall negative experience, but being so ravished by Zora’s Domain, Goron City paled in comparison on almost every front. And with this environment conquered, I hoped I would be able to rekindle some of that potential for immersiveness as I felt with both Zora’s Domain and Kakariko Village. I also hoped I would escape the heat. That didn’t happen.

(All gameplay screenshots courtesy of, once again, MKIceAndFire.)