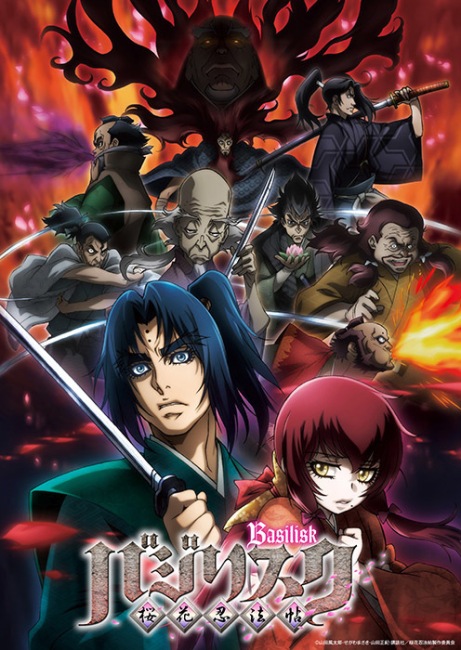 Three episodes in, I don’t even know how to really describe how unnecessary this feels.

Basically, the folks behind Basilisk, written over ten years ago, decided they wanted a Boruto-styled sequel series involving the children of the main duo. This makes absolutely no sense considering the ending of the original series, but I won’t get into that. Thus far, there isn’t anything particularly good about the series, but I think its average rating on MyAnimeList being close to the lowers depths of score hell is a little exaggerated, and biased.

I’ll clarify this: Basilisk: Ouka Ninpouchou isn’t a very good series. This is most notable when a production made in 2018 looks as good as the original series, made in 2006 (some would argue it looks worse). Its budget is likely fairly low and the writing is… uh, plastic? I won’t go as far to say Basilisk’s writing in general is logical in its coherency, but here it feels a lot more “battle shounen” than it did in the original. There was a much better mood present in the original that I think is lost here in its decade-later sequel. Yet, there isn’t enough evidence to show that this series is really bottom of the barrel, at least not at this time. I’d hazard a guess and say those who rate this series on the lower end are people who expected this to be as good, if not better than the original, meanwhile getting in their nostalgic kicks with memories of heart-tingling ninja fights and tragic romance. It’s a (kind of) spin-off sequel made a decade after the original. Level your expectations.

Almost like the antithesis to Violet Evergarden’s immensely high average score, Ouka-nin has a score lower than series such as Asobi ni Iku yo!, Bokusatsu Tenshi Dokuro-chan, and Infinite Stratos 2—all of which are abysmally bad series. As I laugh at Violet Evergarden leap-frogging series like NANA, Shinsekai yori, and Berserk, it echoes along the opposite side of the critiquing spectrum, as well.

Let’s get back to Ouka-nin. Within three episodes, it’s giving the original series a run for its money in terms of outright gore. Someone gets decapitated… and proceeds to move forward as though he wasn’t, only to have his head fall off for dramatic effect (it made me laugh). A few people are incinerated by flames. A man shrivels up into an anorexic corpse by means of poison. I’m waiting for the sexually-clad ninja who seduces people with her skin, because if my post on the original series is any indication, that’s what made that series so enticing. Instead, the first female(?) ninja(?) to use her powers in action can reverse time. Oh, and fly. Fucking what? Why isn’t she the supreme ruler of everything with that kind of ability?

Characterization is next to moot, as the narrative takes precedence over everything—which isn’t entirely bad, just a little confusing now and then. The mood of danger has a thin layer of intrigue around it, making open-ended endings (aside from funny in the case of decapitated-in-the-right-moment man) just a little impactful. Plus, the whole of Basilisk as a franchise is ridiculously stupid as is, why not enjoy as the series tries to explain all of it… or doesn’t! It’s almost like Mayoiga in a way (that’s a compliment, by the way): characters act to the whim of a nonsensical (for now) plot as it slowly progresses to a penultimate resolution before the fall. But hey, maybe it’ll go rogue and do absolutely nothing. At this point, I have no idea what it wants to do, and that’s pretty exciting. I only hope it doesn’t disappoint.

Would I recommend it? No. Is it the worst series I’m watching this season? In a crowded room of three series, yes. Does that make me regret picking it up? Not yet, anyway. It’s still watchable enough to make me curious of what it wants to do down the line. And while people compare it to the parent series as an ideal, I do it more as a crutch. They say “Be like Basilisk or you’re doomed to fail,” while I say “Basilisk was pretty dumb, so this can be just as dumb.”