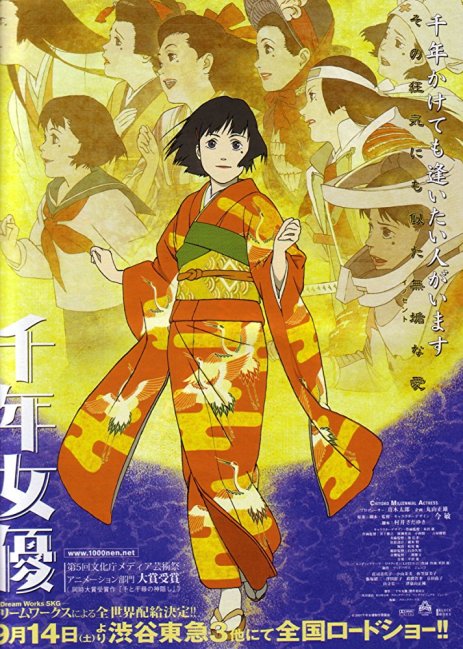 I promised some Kon. Here is a Kon.

Before anything, let me commend the animation department for an incredibly well-detailed execution of fluidity. I’ve said similarly of Kon’s other works (specifically Tokyo Godfathers), but it’s no different here: Millennium Actress looks really, really good from an animation standpoint. Better than most anime now-a-days.

Now then, the focal point of Millennium Actress is that a longtime fan wants to interview his favorite movie actress in an attempt to get on her good side. Or, wait, maybe it’s about the way films represent the soul of the actors within them? But are the film excerpts shown actually movies that she’s been a part of, or are they exaggerations of them to suit her personal experiences? And what about the message of the journey being more riveting than the destination? What about the essence of youth and its impact on the female role in the film industry?

Are you noticing a pattern here? This is a good thing: Millennium Actress has depth in a myriad of different directions—most of which are developed with such sincerity that it leaves little room for doubt. Visions of nostalgia, coated in regret, fondness, and contempt. Political ideals of the time highlighted in the decisions of a young girl destined for cinematic fame. Old vs. new in the domestic space and the entertainment world. There’s so much here that is methodically crammed in all the right places considering the 87-minute runtime. Satoshi Kon is interested in the idea of film being harbingers of substance, of ideas, of personal creation. This is something very heavily noticed with the atmosphere here.

Though somewhat in the same vein as Loving Vincent, there isn’t much focus on character development outside of a single role. Here, the only person who really “matters” (key word) is Chiyoko, the once-bright star who hid herself from the world for the last thirty years. Others simply revolve around her, or are developed through her experiences. The one exception to this is the unnamed man who Chiyoko meets in her youth, whose key to “the most important thing” drives Chiyoko to find him after their encounter for close to the rest of her life. While this encounter develops her for the rest of the film, it’s the only opportunity for development, really, whatsoever. The mysterious man himself is a catalyst and nothing more. Symbolic, even. This is, of course, assuming that really even happened.

What Satoshi Kon is most known for in his work is defying one’s expectations of a consistent reality. Millennium Actress employs a lot of direct transportation into the mind of Chiyoko, with the characters listening re-enacting the scenes that play out (or just watching). The later on it goes, the harder it becomes to distinguish what scenes are real and what are only part of the many films Chiyoko has been in throughout her life. Active watching isn’t typically a part of anime, but here it makes itself notable with a number of quick scene transitions and references to past conversations and scenes. To some extent, in almost feels like a retelling of the same story over and over again; is it really? Or is it simply Chiyoko’s mind at play?

At the heart of the passage, the theme of commitment is one that resonates with me personally. Whether work-related, personal attachment, or just going through with daily blogging for the sake of a dumb annual event, there’s something bittersweet about Chiyoko’s commitment to a man based on a single encounter. The ending is almost enough to give the audience something to cry over, though it’s more of a personal triumph… or maybe it isn’t? Kon, you indecisive bastard… 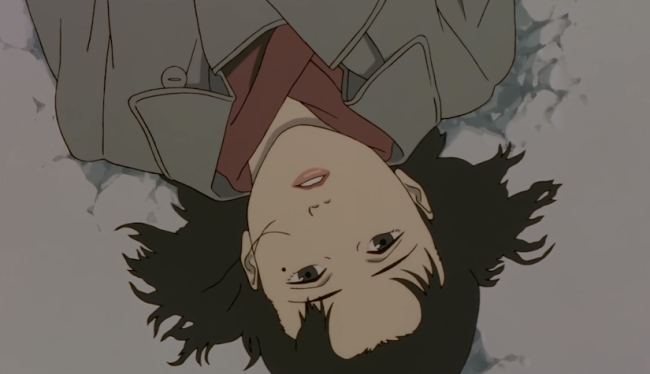 Another successful experience for Satoshi Kon. I’m undecided as to whether I want to watch his last major motion picture, Paprika, for another block in this year’s March, but it’s definitely something I’m looking forward to if gifs are any indication. As the battle settles down, I think Millennium Actress is my favorite of his films, with the other two films only a point away in difference. Basically, what I’m trying to say is that this is a good film. So good, in fact, that I’ve started talking about tomorrow’s film without you even knowing. But what am I talking about?!