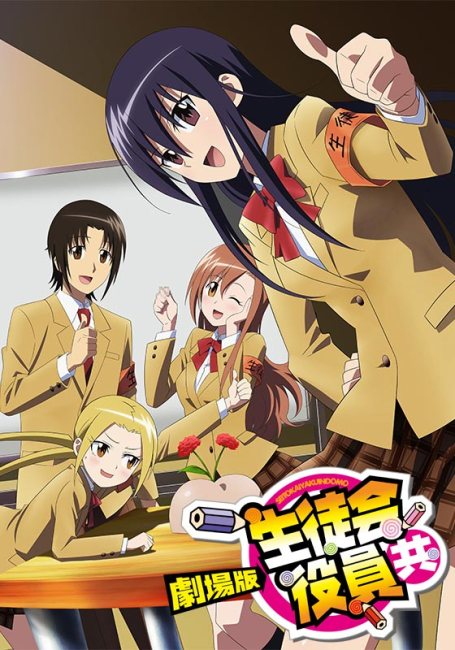 I could write a lot about this film, but that would mean re-treading the same ground as every other adaptation of the Seitokai Yakuindomo manga ever, because it’s so little different that I may as well copy-paste various observations from old posts.

Based solely on the synopsis, I almost thought this would be a reboot of sorts, to go about a different interpretation of the start of the series. Maybe they would focus more on character interaction, or maybe they would frame the series from the perspective of a different set of characters? A few minutes into the film, I realized that this wasn’t the case; it’s simply a continuation of what has already been, with the same absurd vulgarity the series is known for. Why else would it open to a flying dildo machine zooming through the halls of the school, conveniently passing by every familiar face from the story?

To some extent, this is unfortunate. With two one-cour seasons and two separate OVA packs attached to each, this series has seen a long, long run of the same old shtick. To reboot it and go with something a little outside the vulgar orthodox would at least be an interesting selling point. So, with my mindset focused on the new content tinged within the same selling point, I focused on what made the series so “funny” in the first place.

At this point, I think I may not be the right person to ask about this series. Watching (almost) every anime adaptation and being relatively up-to-date with the manga, I’ve just been burned out on the level of absurdity this series presents. Nothing surprises me anymore. Y’know what would really surprise me? One of the girls confessing to Tsuda. That would be interesting. That would spark some life into this series. But that has a 0.00001% chance of happening. Only way it would is at the very end of the series, with the ending being left ambiguous.

Though it isn’t bad—only much of the same. You like sex jokes, they got sex jokes. You like light-hearted atmosphere with no propensity for drama or any sense of seriousness, they got it. A very light watch, and the movie is nothing less than what one would watch before indulging in it. Though be warned that if one watches this movie version first, they will be very confused. The movie has a tendency to reference its preceding adaptations.