Hey, guys. Remember when Gen Urobuchi wrote Fate/Zero? God, what a great anime, huh? The greatest achievement to anime of all time. God bless his deep, psychological mindset. Nothing he could ever write could undermine these unrealistically high expectations of mine.

I could absolutely be straw-manning here, but seriously, what is with all the nose-upturning with this? I really don’t see why people shit on this one so hard. And I really do believe, to some extent, that it’s the fact that Urobuchi wrote it. Because he wrote that one great anime, suddenly everything else should be just as good, if not better or very slightly worse.

Let me tell y’all a story: 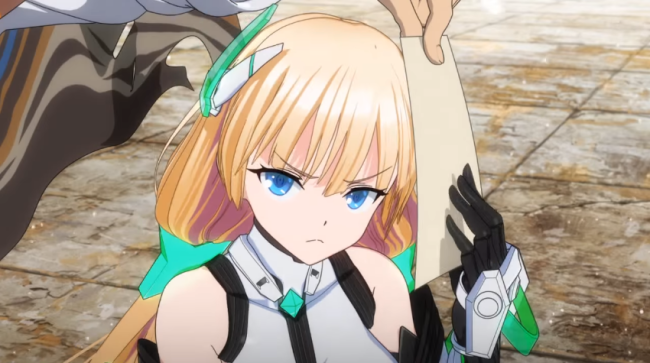 Why did I read/watch them? Because they were written by Takemiya, primarily. That, and because they were romances, something Takemiya has shown to be pretty good at in the past. I read/watched both of these series years ago, so I think with some time to settle I can say that I went into these productions with a big head, with too much expectation to consider them great, if not masterpieces that would once again re-kindle my love for Takemiya. I’ve considered re-watching Golden Time a number of times since I finished it, wanting to look at it from its own standpoint instead of having the shadows of Toradora!’s personal success with me loom in the background.

Rakuen Tsuihou is a standard sci-fi adventure film. The key word here is standard: people probably don’t like associating such an ugly word with Gen Urobuchi. His past work has shown to be full of psychological wit, deep thinking, and moral ambiguity that made his series seem mature and grounded outside the pronounced “THE POWER OF EMOTIONS!!!” standard set by the mainstream. This film falls in line much more with said standard. People could easily see this as a betrayal of expectations.

I knew this film was a “Love it or hate it” type of project, with hardcore fans spitting upon it while general moviegoers gave it a solid “I had fun with it, I guess.” Otherwise, I had no expectations. I didn’t even read the synopsis for it—I went in relatively blind, with only the memories of a review from best ani-tuber DEMO to give my mind some foundation. Oh, and I didn’t think Fate/Zero at the time (watched in 2013) was all that great, so there’s that.

I came out decently charmed. I thought the characters were okay, the CG animation was jarring at times, but tolerable; the plot, while simple, was robust enough to follow easily and decipher. There are things about negative reviews I definitely agree with, such as the clearly visible “Authority is evil” moral coding and the random, unnecessary sexual fan service. Then there are things that I feel miss the mark somewhat. As the world’s premium tsundere apologist, I liked Angela decently enough. I thought her bitchiness was justified through her prime and proper upbringing of having everything granted to her when needed, only to be placed in an environment that took away that privilege, so she was essentially a spoiled brat for half the film. Of course, many could argue that that justification is just another scapegoat for tsundere archetypes to run rampant in anime… which I can’t really argue against.

I wasn’t actually a big fan of her comrade, Dingo. His personality is decent enough, but we don’t know much about him besides the fact that he likes the natural, tangible world (though that could be the plot talking) and he really digs old rock music. I’d like to know more about his situation, his past, his motivations (outside of profit, which seems to be discarded by the end). Angela’s past as a not-really-human-but-still-kinda-human whatever makes her situation a little more excusable, but Dingo is supposed to serve as the antithesis to her, and he barely comes across as likable, much less inspirational.

It’s okay, mostly, as I implied before. Overall, I think the more simple plot line isn’t a detriment to the film as much as it is a crutch. It could’ve been better, certainly, but I think what it manages to accomplish in its time is commendable enough. Frankly, I was pleasantly entertained through the whole, whether by the interaction between the characters, the upbeat techno soundtrack, or the methodical approach to the inevitable “YOU CANNOT TRUST THE POWAH” moment. It felt epic without really being so, one could say. That’s… really not a compliment, but I digress. Almost like a modern Disney flick. Except female objectification.