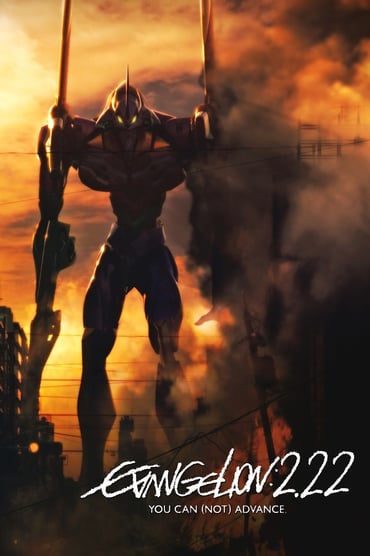 Something odd has been occurring to me lately when indulging in trilogy films. Whether it be Spider-Man, Alien, Nolan’s Batman, or now this, I seem to not be impressed by the second outing, which many fans of these franchises consider either better or more enjoyable than their first entry. I swear I’m not intending to have this happen—I guess I’m just a hipster?

That said, this is not a proclamation of Evangelion 2.22′s poor quality. Should I spill my general thoughts now, I think its quality is on par with Evangelion 1.11; though this quality is not as fluid as some of the animation present is.

The last twenty-five minutes of this second act is phenomenal. Animation takes you by the eyes and drags you into an ecstasy-filled desert and builds and builds and builds until your eyes feel like the screams coming out of your brain into the void space encompassing your position. At no point in the first film did I feel as completely overwhelmed by the sheer “epicness” and emotional output the strength of seventeen atomic bombs from events transpiring. Familiarity, maybe? The new content here feels damning, final—of course, with the knowledge of a sequel this seems hard to process. Nevertheless, “riveting” is a bit of an understatement, and I can see why this film is so beloved.

And this fondness stems from the last twenty-five minutes.

What came prior is actually a little weaker in content, I feel. It focuses a lot more on the casual, the lighthearted. Developing the relationship between characters and focusing a tad more on minor characters when the first film was more focused on the major cast. To some extent, this is admirable, but at the same time, I don’t think the minor cast was given enough credit to warrant being dubbed anything other than plot drivers. Not so much “devices” as they aren’t used for much of anything. They fill background space and interact with Shinji and co. Plus, this focus takes away somewhat from the major characters, and I’ve the impression Asuka’s development here is a little thin. She comes in, acts like a bitch, then slowly falls in love with Shinji because that’s what the script says. Some emphasis is made on her desire for her own self-dependency accompanied by her loneliness, though it feels glazed over by the end. Rei got the benefit of being in a decent part of the first film, Asuka gets left out for the already established and a random new character.

There’s some issue of continuity in characters’ behavior, notably Shinji. He still has reservations about piloting the EVA and developing his relationship with his father, but he has a lot more of a backbone here, and doesn’t so much as have any emotional breakdowns outside the ending scenes. One could argue this is due to his new attachment for Rei, which is likely a good point. I only wonder if this boy, who was supposedly neglected for most of his life, all alone, would suddenly risk everything for one person. Maybe!

Plus, there isn’t a whole lot of ruminating here. The first one was a good recollection of the original series and the emotional angst of the consequences of having kids take on adult responsibilities and what-not. Here, everything feels a tad too hunky-dory, especially for a series like this. Maybe to make the final sequences more shocking, more tragic? Certainly more dull than the first film, though I was never at any point straight bored.

So does an amazing one-fourth of a film make it better than the previous, despite the rest being less than amazing? Hard to say. Much like with the criticism of the first film, I feel there are expectations set upon this series to deliver something extraordinary, and considering the existence of the parent series, something new. I don’t blame them for this, but on its own there are still some good things in place. How good, I say with some chagrin, is a little up in the air. My own expectations gave me the impression this would clearly be the strongest of the trilogy. I only like it as much as the first—which is still very good, but not amazing. Hopefully those viewers got their fill with those twenty-five minutes. I fuckin’ did.

Movie three should be fun.