While there is no confirmation for this, I have the impression that people come to this blog, read my criticisms, and assume that I am a very cynical and apathetic person. In my past, I can’t argue against this, as the foundations of this blog’s creation was deep within the realm of taking the craft of anime criticism very seriously—which led to a very conscious effort to establish the good from the bad, to be the authority of quality within the anime medium. The early stages of The Visualist’s Veranda, then called Criticism and Thoughts, has the presence of overwhelming cynicism and a tendency to alternate to a mocking, elitist tone.

Thus, when confronted with a series like Violet Evergarden, which has a large portion of scenes dedicated to twisting the heartstrings of its audience, I assume those people would immediately look at me to be completely unaffected and drill it. True, not many anime have spoken to me on an emotional level, but I’d like to take some time at the beginning of this post to ensure those who may have had doubts that I do, in fact, have a heart, and that these kinds of series are actually some of the more interesting shows in which I choose to indulge in. What happens most often, however, is that these emotionally-charged series go overboard with their spiels, their angst, to a degree which I feel is overwhelming compared to the development of the characters involved. Some series do it well enough to get by (White Album 2, Evangelion), while this and many others do not have the same finesse to their situations to make me empathize with the (sometimes numerous) characters present.

At the same time, this imbalance of emotional purging and character development is not the series’ only issue, as I feel it’d be easy to simply say, “I couldn’t connect with it. It didn’t make me cry. 1/10.” Structurally, Violet Evergarden is a mess. The first three episodes have an “introductive” vibe to it, with the establishment of Violet’s background, motivations, and quirks within a society/profession that is unsuited for her abilities as a former tool of war. These were, in my mind, the strongest episodes in the entire series, and made me excited about its future course, unaware that it would take a different route entirely. The next five episodes are primarily episodic in their essence, with Violet going around helping variously specific people per episode with sending letters and solving inborn troubles. Episode nine takes the series back on track with an episode dedicated to further exploring Violet’s own insecurities, but then the next episode becomes the episodic fluff from before! And then, the next episode is a mix of episodic filler and serious story, only to have the last two episodes include Allison to Lillia levels of overly sappy and ridiculously unrealistic interpretations of anti-war rhetoric. What is with this confusing back-and-forth game with the plot?

It ends badly, to nutshell it. What was once a surefire recommendation due to a unique premise, setting, and execution devolved to a seen-it-before experience of overblown emotional manipulation. “Disappointing” is an understatement; with Koi-Ameagari ending badly from my view as well, I held out hope that Violet Evergarden would show it how it’s done.

On the topic of its messy structure, allow me to admit something both good and bad about the episodic episodes. I don’t typically like them, mostly because they feel as though they diverge from the main plot at hand or do little to develop the ongoing characters or show them in any interesting fashion. Violet Evergarden falls victim to this, but at the same time I enjoyed most of the “filler” episodes because they at least felt more important than basic filler. The way they handled each situation felt more akin to Cowboy Bebop-filler than, say, Naruto-filler. Plus with the backdrop of Violet’s character slowly learning more about the world and the people within it, it at least made more sense in context than other series. Sheer quantity made me a little eager to get back to something more substantial however; I would argue episode nine should’ve been episode thirteen, or twelve. But I guess that would’ve made it formulaic, huh?

Episode nine was fine. I promise not to spoil much, though I will provide enough to give the reader, who may be unfamiliar with the series, the foundation of why I feel it’s a good example of drama. After partaking in a number of emotionally-charged requests from people who need some sort of solace in their lives, Violet becomes respondent enough herself to understand the weight of her own struggles and, once triggered, loses her entire sense of self. We, as the audience member who has followed her apathetic self up until this point, can empathize because the trigger to this breakdown was noted very early on and is emphasized through her mannerisms and mindset. Her entire being is literally tied to this one thing, and when she feels she’s lost it, it’s easy to empathize. With the time spent caressing these traits of hers while also watching her slowly grow more humanistic in quality, episode nine is probably the best episode of the series outside the first three and entirely justified in its (hyper-)level of emotional feedback. The next four episodes almost feel unnecessary by comparison. I feel quite strongly that episode nine should’ve been the end. It feels like an ending episode, especially compared to what follows. To have another semi-episodic episode proceed immediately afterwards, with Violet seemingly unaffected by the disaster shown in the last episode, is baffling. And then there’s the anti-war (I guess) proclamations within the last few episodes, which are hilarious not for their innate cause, but their execution. All I’ll say is that if you have a gun, and are surrounded by people with guns, you should probably shoot the one enemy in front of you, not gawk. Its cliché factor is limited only by the space available by the outer crest of earth’s atmosphere, and there isn’t anything more substantial than was stated before, specifically in episode nine, about Violet or any other character. In terms of the world they’re involved with, there are semblances of unruliness, but not nearly enough to justify what is to randomly occur.

What’s been apparent without having me explain it any further is just how vivid the animation and design of the anime is. Truly, it decimates its competition easily, though that isn’t to say it’s perfect, either. It’s very good, though sacrifices some shortcuts for the sake of making more important scenes as splendid as possible. Some choppy animation with faraway shots, which I noted in later episodes, made me cringe only slightly; a specific scene where Violet and a pilot are taking off from a runway in a plane made me audibly giggle with how smoothly it ascended. Some chinks in the armor shouldn’t be enough to dock points for an otherwise fantastic effort as KyoAni once again shows it’s at the top of the  animation ladder for a reason. 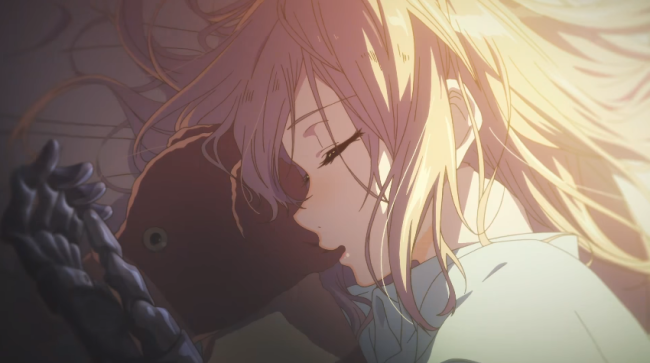 It did not have the quality to match its emotional ambitions, but it tried its damned hardest. In the end, it’s more good than bad, with only the strange course taken in the last four episodes to blame for not being an easier recommendation. Animation is splendid and Violet is a likable and pitiful lead, with all the conditional spirit to have that empathy wring quietly. If one should only focus on her, this will likely be a very rewarding viewing. As an aspiring critic, however, there are far more pieces to this puzzle that need to fit in order for me to see the whole picture. I feel it would’ve been a really captivating image.