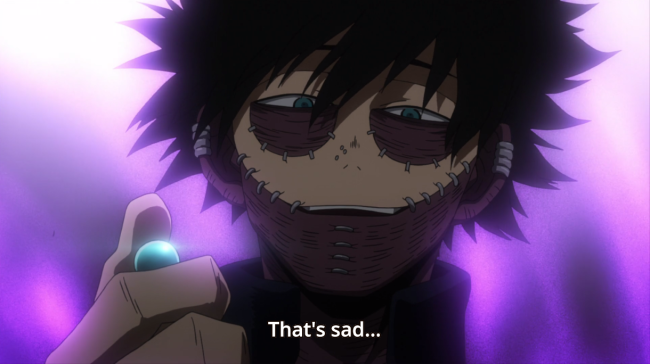 Episode seven. Seven episodes in and already the biggest “twist” of the series (or so is implied by the episode title) has been foretold. What’s to make of this week’s direction? Me and my lovely ani-compatriot Karandi discuss the philosophical curmudgeon behind the aftermath of the League of Villains’ major manipulative scheme.

I may as well be writing this show. All of my major predictions have been coming true so far. Last time I asked about the disappearance of Aizawa/Kota and the kids being held at the resort building. The first five minutes of this episode answer just that. Last time I predicted that it was likely that Bakugo would be taken, but Todoroki would be spared. It was so.

And what of the aftermath to these situations? A lot of angst and regret. Students are heavily implied to desire acting rogue and tracking down the League of Villains for themselves, all to fulfill their own desire for revenge or sense of self-worth. Iida, in a subtle nod to his character development from the previous season, tells them that they’re idiots and to leave it to the professionals. This is the most intriguing part of the episode, as Midoriya, the one most entranced by the prospect of heroism, may very likely empathize with those wanting to save Bakugo and join them in spite of knowing what’s most logical and safe.

The question becomes: Will the series punish these heroes for going rogue? Or will they end up succeeding because of that heroic honor? My theory is probably both.

Though we have many episodes to go through in this season, and aside from the interesting prospect of “Go or stay” among the student heroes, the tone of Boku no Hero Academia has turned for the serious, which I don’t believe will be properly alleviated until some resolution with Bakugo. With this in mind, I don’t expect a lot of zany or comedic interactions between the characters (though there was some attempt this episode with All Might’s ringtone), which is a shame in hindsight because these moments were among my favorites from past seasons. It’s akin to watching the tensile climax from a slow-building drama that impedes all else; you know that feeling, right? Like at the very end of White Album 2 or Chobits? It’s a good thing I like this series, or else I’d tire of it pretty quickly.

Another good episode. Three words that wrap up everything I said above in as blunt a way as possible. 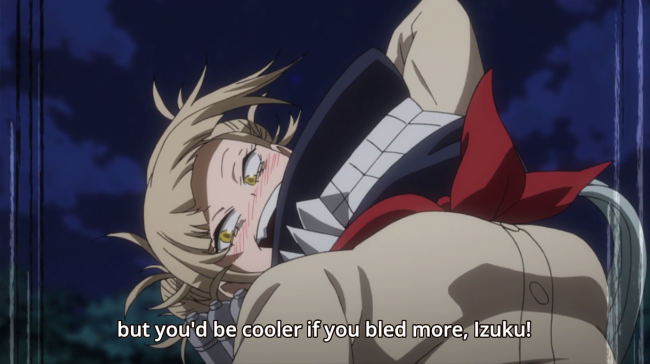 I’ll echo that this was another good episode. My biggest complaint is with the episode title: “What a twist”. I’m still waiting for a twist. As Kapodaco has said, they’ve taken the pretty straightforward path and a bigger twist would have included the kids not managing to save either Tokoyami or Bakugou rather than just having Bakugou kidnapped, which seemed a pretty foregone conclusion even though I really wish they hadn’t gone there.

However, there are some interesting thematic implications going forward particularly with this anime’s ongoing focus on what it means to be a hero and defining the term. Because, by the nature of the setting these kids are in, if they willingly defy the law and go after Bakugou they kind of cease to be heroes which is what they all dream of being. And yet their own morality is telling them that if they abandon their friend they also cease to be heroes. It is a conundrum that is likely to divide the group and provide some interesting fodder further down the line.

I’m also curious as to whether it will even matter. The professionals will clearly move in and hopefully soon, so by the time the kids get moving it should all be over one way or the other. So what is the plot going to throw at the professionals to keep them from succeeding to make the students actually relevant? That will be an interesting reveal.

The one place I will differ from Kapodaco is that I’m kind of happy the show has taken on a more serious tone. While I don’t dislike the lighter moments, they are more parts that I tolerate rather than enjoy. For me, I love this anime when it deals with its character and its themes and does it in a way that makes me think about the ideas it presents. The lighter moments are fine with being put on hold while the anime delves into some more serious content for awhile.