It’s difficult to really place my thoughts on this with any sort of certainty, because I’m unsure as to how seriously I should be taking this. A few weeks back I wrote a piece on pretentiousness in anime; Pupa the manga is not an anime, but it fits the bill enough to see itself among the ranks of works that (supposedly) take itself far too seriously. But that’s the issue here: Is it even trying to make any sense? Is it trying to say something? I can only provide my own thought process while reading this, but before getting into the deeper theoretical aspects of Pupa‘s design, I’ll elaborate on some more basic elements.

The first thing one will see upon opening the novel is the art—the atrocious, horribly uneven art. I have seen some bad art done intentionally and unintentionally. I cannot tell which is the case here. By the context of the tone of the story (which is exceedingly dark and serious), I would imagine that the only explanation for it being so bad is that it captures the dream-like essence of the tale and its corrupt moral messaging. The sort of ironic use of bastardizing the “beauty” of the artistic aesthetic to strengthen the narrative or tonal aesthetic. At the same time, some would find this an excuse to get away with genuinely shitty artistic talent, as there was nothing within Pupa that impressed me. Lots of blood and meaty flesh being torn and giant pregnant bellies and people warping into demons. Shocking, but not impressive.

Credit should be given for differentiation of characters. What sets the main duo apart is that one looks like a pure little princess and the other has a giant scar on his face the likes of the Phantom of the Opera. Other characters offer the same level of individuality by being outright strange-looking. Of course, this entire story looks strange; characters and backgrounds and abject horror all included. One could call it graphic horror, others (I’d feel more inclined to put pressure here) could call it bad. The sort of expressions that only crazy people would exhibit, giving freedom to not be at all genuine-looking or structured, goes well when every character is crazy, every situation is crazy, and crazy crazy yzcra arcyz ccccaryyz rrayyayzr rryyaayyzys!!¡¡¡!!¡!¡!!!¡¡!!

In Pupa, the two main characters, Utsutsu and Yume, are brother and sister. They were abused as children by their insane father, while their mother left them at a young age. Over time, the two have become so attached to one another that they would die for the other in a heartbeat, proceeding to kindle a relationship between siblings that borders the incestuous. Through a series of events, Yume contracts a sort of virus that turns her into a monster, a monster that hungers for flesh of all forms. In a desperate attempt to save his sister from losing herself (I’m skipping ahead a little; will explain why later), he offers to become her food source, so that he will forever be the one that will provide for her, further implementing their dependency on one another. 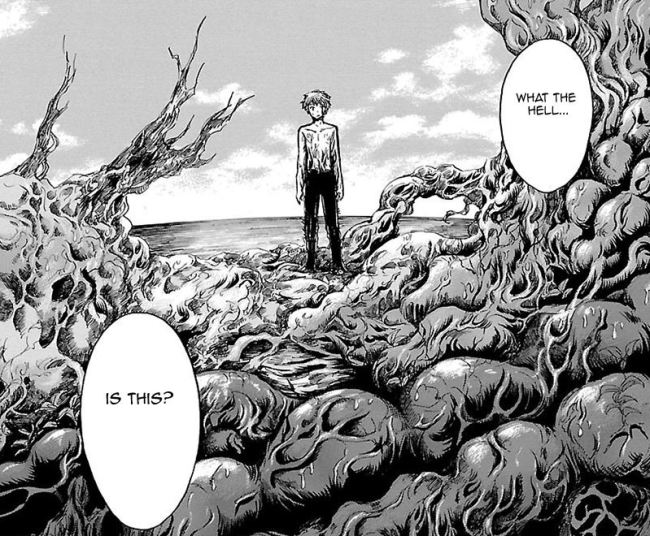 With this context in place, here’s a fun thing to consider: Pupa is a twisted allegory for incestual relationships. Yume and Utsutsu, sharing a similar upbringing of abuse from one they’re supposed to be gaining love and support from, have isolated them into a reality where only they understand each other’s pain and suffering. This sort of alienation from the outside world leaves them with only each other for complete and utter trust and love, fearing that anyone else simply wouldn’t understand—and they very likely wouldn’t. The act of feeding upon Utsutsu’s flesh is somewhat like the act of sexual intercourse—portrayed as horrid, disgusting, but secretly pleasing and addicting. Yume’s position as a cute younger sister who depends on her older brother for everything, suddenly hungering for “flesh,” could be seen as a sexual awakening, seeing as she’s sixteen (she could pass for younger). After all, sex is sometimes referred to by douchebags as “The pleasures of the flesh.” On top of this, many of the feeding scenes in Pupa feel sexual in nature, with Yume and Utsutsu’s clothing usually discarded or dangling off of them almost as if they were shedding. The faces they make, the pleasure they derive from it—aside from the obvious pain—makes for an interesting think piece.

This emphasis of the relationship between Yume and Utsutsu, of brother and sister, is the only interesting and potentially great part of the manga as a whole. As I said through the opening paragraph, I have no idea what this story really wants to say, or how much it even wants me to take it seriously. Why I say this is because it goes against itself numerous times.

Here is where the pretentiousness factor plays a part in Pupa’s downfall: the writing (in general). Focus and pacing are such pivotal things, especially if one tries to make sense out of a seemingly symbolic story. There are two extremes that are often disdained by fiction-consumers: too fast and too slow. Too slow usually gets the fullest brunt of the negative criticism because it’s so easy to make the pace of a story too slow. Pupa is an example of the opposite—it’s just fucking bonkers fast. Every chapter seems to end on some over-the-top cliffhanger that makes the foundation of the Pupa as a… whatever it really is (Species? Virus? Existence?) even more confusing. If I had a limb eaten for every time the manga features a character thinking they know what’s going to happen with Yume or Utsutsu because of their condition become surprised by a twist in their theory, I’d be totally consumed three times over. Constantly trying to one-up itself with the twists and cliffhangers and unexpected happenings and pushing the limits of the Pupa people makes it really hard to take seriously. Nothing surprises me past the halfway point because I can’t trust any sort of rules the manga sets for itself in regards to the monsters it creates. But at the same time, would it even matter if it set up rules? Do Pupa require rules? Or are they just beyond rational human comprehension? It’s so bizarre and confusing and, frankly, tiring. 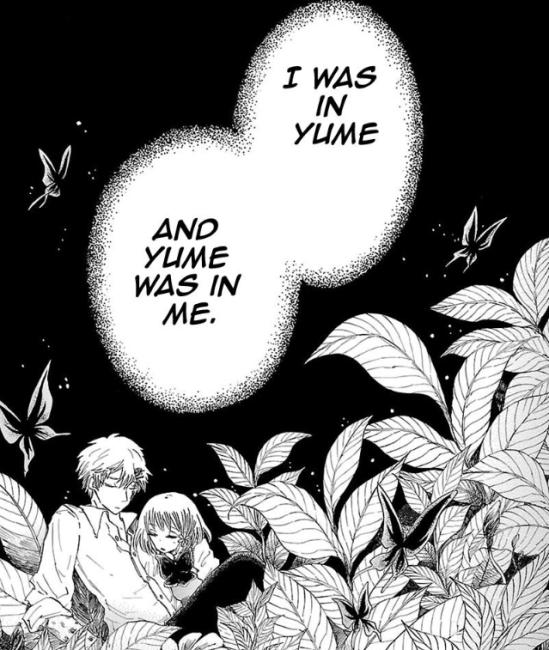 If all else fails, I can depend on one thing in manga that completely destroys all and any future interest I have in a work. Say it with me, y’all! THE POWER OF EMOTIONS!!! Yes, Pupa is a victim of the very, very, very, very tired trope of using human emotions to trump all other species and/or threats to the wilder of such powerful emotions. Even worse, it’s the basis for many of the so-called “surprises” they try to throw out on a chapterly basis. Yume is seemingly dead. What to do? Utsutsu will think back to his childhood and remember how much he loves her. He’ll scream nice things. He’ll eat and he’ll kill. He’ll suddenly attain some super-powerful form that was hidden deep within to make all the bad go away. Happy ending. No joke: Pupa, with its gory, negative tone, has a happy ending. That’s the closest I’ll give to a spoiler for this entire review. And that happy ending itself, once again, goes against what the writing may or may not want to portray.

So, on one hand, the writing is incredibly clichéd, repetitive, and pretentious. On the other, it has various themes that it presents in pockets of its work that are worth exploring. What makes this harder to place is the continuing theme of “What?” It’s such a confusing work that has hints of abject sublime only to upend itself by being laughably cheesy and bizarre. What do you do with a work like this? Wonder how it could’ve been better? Perhaps for a time. The more cynical and realistic answer, however, is to not waste the effort in grieving over a finished product. Learn from it and move on. That’s my happy ending.

The rating for this title and all others can (eventually) be found on MyAnimeList.