I have a problem. A dilemma. A conundrum. Please spare some time to hear my struggle.

I hate this manga. I hate all that it stands for, and how eagerly it tries to secrete drama out of every bloody pore on the thirsty prepubescent teenager’s naive, inexperienced face. I had an absolutely dismal time reading it and if I didn’t think there was just cause for not being so harsh with it, it would be an easy 1/10. Rationally, there really isn’t much wrong with this manga on the outside, which is what troubles me so. Only that I do not know how much I should wager my own disdain in its worth to others.

At the end of the day, I’m not the demographic. I’m nowhere near the demographic. I imagine this was aimed more at younger girls, though I was never one to play extreme gender roles. Drama, romance, doki doki moments, cute boys being earnest and supportive, while others the female-equivalent of a tsundere; girls establishing their own independence from the clichés of society, only to jump back into them when the going gets tough, and much more that women are supposed to be into, I guess. But there’s something more to it, something I noted pretty on which only gets exacerbated as the manga’s chapter count grows.

This is a fantasy manga. Don’t let the genres fool you, this is not a realistic high school slice-of-life romance. This is fantasy, because real life doesn’t even come close to how things are portrayed in this tale. More than that, the main character and his only friend are otaku, something that is treated with disgust up until the halfway point of the story. What does this have to do with anything? Easy: it’s fan service for otaku.

“Yes, even you, lonely otaku who only cares about the 2D world and puts no effort into acclimating themselves to society, can have a beautiful girlfriend fall into your lap as long as you stay true to yourself and don’t change. Show the world your earnest desires and your nice guy™ traits so the world understands you’re just a sweet and lovable soul. They just don’t understand. You’re different, and that makes you special.”

Am I reading too much into this? More than likely. In fact, the beginning portion of this manga makes it sound like I’m spouting nonsense. However, when someone realizes the broader points of the story and how it ends (Spoiler warning ahead → Skip to next paragraph), it becomes worth exploring. “Tsutsun,” as he’s called, is an otaku who’s teased for being an otaku. Everyone bullies him and no one even tries to talk to him. One day, a beautiful girl decides he’s interesting, then tries to talk to him, only to have Tsutsun reject her advances. Later, he stands up to an abusive boy who tries to drag the girl off, only to get the shit beaten out of him. Beautiful girl then asks him out, to which he doesn’t believe, but eventually they do get together. Then another girl randomly starts talking to him and befriends him. Then another girl, who also happens to be an otaku, falls in love with him and confesses to him. Then another dude who used to hate him becomes his friend, too. Then no one bats an eye at the fact that he’s otaku. In the end, he marries the beautiful girl and lives happily ever after. What did Tsutsun do this entire story? Cling to the girl and be a general dipshit for its entirety, who barely altered his own confidence in himself. 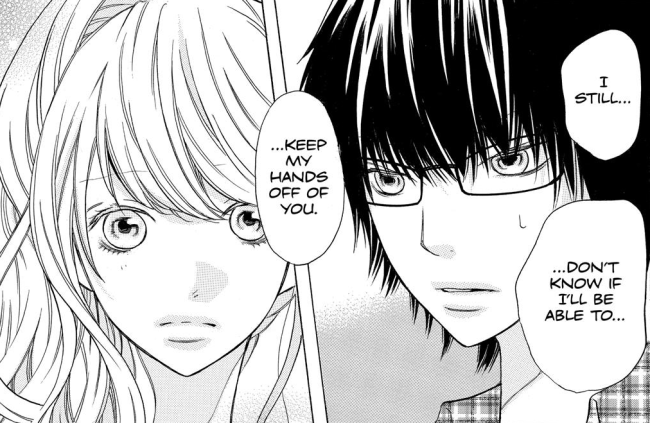 Otaku can find love, yes. The message I’m trying to get across isn’t that they shouldn’t be able to, but that the author’s use of the main character being otaku means absolutely nothing. It feels like a marketing tactic, designed to attract both the girls that the demographic calls for and the otaku who are (usually) vocal enough to attract attention to all sorts of works. And hey, this manga got an anime adaptation that’s currently airing! I guess it worked! Tsutsun’s being otaku only causes a minimal amount of discussion about not judging a book by its cover—something that has been done a million times over in better ways by different archetypes—and creates even more drama for the story to take advantage of.

Oh, the drama. So much drama in this work. It wouldn’t be so bad if the writing wasn’t so forced, the exposition so blatant, or the doki doki moments being used as ammo that’s shot into one’s retinas every other page. I suppose the only way to get young people’s attention is to flood them with twists and turns, most predicated by misunderstandings and general stupi—er, ignorance, by the characters, as that’s all 3D Kanojo does with itself. Lifeless are many of the characters, whose only exuberance comes from how uninteresting they are. Only one female character, who constantly coos for the romance and drama of having a romantic partner, doesn’t come across as a piece of wood that spouts emotional gunk.

The amount of ways the drama comes out is equally as impressive. Love rivals, more love rivals, an assumed affair involving Tsutsun’s parents (that whole volume just kills me), a beauty contest, friends’ romantic lives, siblings’ romantic lives, a serious illness, treatment of otaku in society, sexual tension, break-ups, rejections, maid cafés, controlling siblings, the list goes on. Every volume features a fresh hell of drama and horribly over-the-top lines that no human would use so frequently. Yeah, it doesn’t have to be 100% realistic, but I would like at least a 50/50 split between realistic and complete fantasy, y’know? This otaku, who suddenly gains a group of buddies/great girlfriend by saying a line or doing an action that most of humanity is capable of saying or doing, because basic human empathy, goes on a rollercoaster of a high school life most people couldn’t even dream of. This level of stupidity was present in Ore Monogatari!!, too, but at least Takeo was interesting!

I really should stop shitting on this manga so much. Because despite all of this, I do feel bad. The mangaka left little notes at the beginning of various chapters chronicling her(?) work on the story and her life outside of it… and she sounded so sweet and into it that I felt so bad that her writing was so horrible. I don’t want to be the one to tell someone that their work filled me with such savage fires of loathing when they seem so passionate about it. Such is the case here, so I’ll use a little snippet of time to highlight the good of her(?) manga. 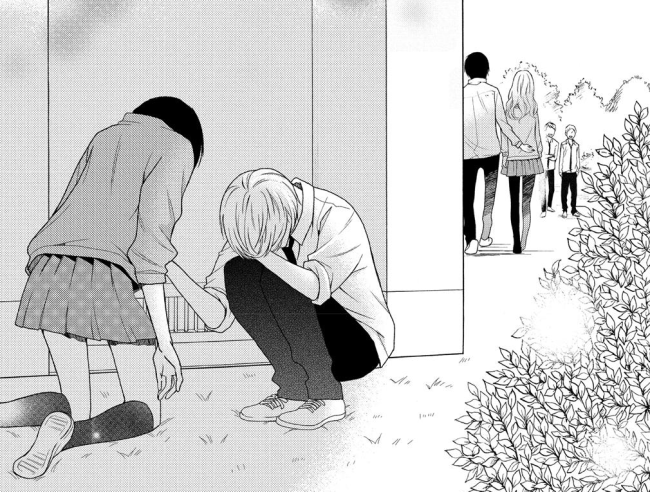 The art’s fine. Some characters are cute for a couple pages. The parts about how much of a doormat Tsutsun is when bullied for being otaku is interesting (if only it were developed). The earlier parts of the story, despite how overdramatic it all was, didn’t really make me hate the series. I almost feel that if the mangaka were to just continue the story in a sort of bittersweet way about how Tsutsun has to MAKE A FUCKING EFFORT to intertwine his otaku interests with his societal standing to better improve himself as a person, instead of just doing everything for the sake of someone else, this story would be a lot better, and much more intriguing. That’s not to say Tsutsun has to do one or the other, but there’s so much selflessness in this story that it makes me a little queasy. Do both. Be a good boyfriend to your girlfriend, make her happy, but make yourself happy, too. He should do what he can to improve himself and not be so accepting of his pariah status; if a dude who tried to publicly denounce you for being a pedophile can end up being your friend, you can likely turn others in your favor, as well.

So keep this in mind upon reading this closing paragraph: I despise this manga. It’s laughably stupid, painfully overdramatic, and potentially harmful to the continuing depression of the otaku’s mental state and expectations. But does that mean I think it’s the worst thing I ever read? Yeah, probably. But it also means that it could be something different to someone else and their mindset. Aesthetically shoujo and full of the doki doki, if one likes doki doki, one will enjoy 3D Ka-doki doki. Know what you’re getting into.

The rating for this title and all others can (eventually) be found on MyAnimeList.