I could almost copy/paste the opening (full) paragraph for Inugami-san, read a few weeks back, to this most recent manga title. Itoshi no Karin (not to be confused with Itoshi no Kana… ugh) is a manga that I’m almost certain doesn’t even make the minimum requirement of pages necessary to qualify for the Summer. At twenty chapters (technically twenty-one, but it includes a bonus chapter) with an average of twenty-four pages (give or take), that’s about 480 total pages—the minimum was 500. Seeing as it was so close and the kawaii waifu adorning the cover entranced me, I figured I’d let it slide. Besides, it ended up being  the exact thing I was looking for to read after super-duper Shounen space adventure.

This is a romance story, tried and true. I will spoil one thing, though: there is not a kiss to be found. Hell, there’s barely any physical contact at all between the curious couple vying for each other’s attention, at least later on. This spoiler is what makes this story just a little bit interesting. Just a little. Otherwise, it’s pretty normal.

Boy is twenty-years-old, Boy works at an amusement park as a gardener, because he likes flowers… I think? Here’s the thing, it’s established that he likes flowers, but never to what extent. He has flowers in his home and likes his job as a gardener, but he doesn’t really seem that into flowers other than admiring their aesthetic quality and comparing other beautiful people to said flowers. He compares his love interest, the seventeen-year-old Karin, to one of his favorite flowers. Some conversations between the two and a certain catalyst to their continued meetings come in the form of flowers. So the question becomes, do flowers really serve any point to the story other than a plot device, and do they really say anything about the male character who indulges in them often? Both, in my mind, tread closer to “No.”

In passing, this doesn’t seem like much of a criticism. What the point lying underneath eventually grows into, upon the fragile pace of the story’s quick presentation, is whether or not anything about it feels realistic or genuine. One begins to question whether or not this male character, who is flighty and nervous, is really just a stereotype of the quiet male characters who conveniently find love because plot. Such is the case here, as while things begin to unravel for him the moment he does take a step out of his comfort zone, the consequences shoot through the mind of the reader at a blinding speed.

Part of this is the fault of the female character, who lives alone due to the hospitalization of her mother. Much like the male character’s “love” of botany, the female character has a hospitalized mother who is only brought up two or three times throughout the entire story. Rarely does it ever show her visit or even mention it outside of discussing her living conditions. Again, it just feels like a character trait thrown in there for the sake of making them feel more realistic, when it just makes them more archaic because it doesn’t say anything about them. It’d be like me making a character in a story and explaining through character dialogue that they were abused as a child, then never mention it again. What’s the point? Of course, there kind of is a point because a specific hospital visit gives her some realization of sorts, but it’s a little too large of a spoiler to discuss. All I’ll say is that, like most of the story’s outer ridges, feels flimsy and thrown in.

Much of this can be generalized with “The story is too short, so it can’t elaborate on the things it wants to embellish,” though I think that’s a bit too easy of a route to take with critique. Even short stories can have some weight to them, with all sorts of impactful story and character elements that shine in a realistic sense. It all amounts to how the story is framed, and Itoshi no Karin is, put simply, too fast. Upon the first meeting the main characters have, the female character almost instantly finds herself attracted to him. Why? Because he’s nice—AKA plot. From the second to third chapter, the female character begins to come forward on her own as though they’ve been friends for years, and what surprised me the most was just how early a confession is made—before the halfway point of the manga’s length. I understand the manga’s only twenty chapters, but seriously. Can we have characters who fall in love because the person they’re attracted to actually has attractive qualities outside of “They’re nice”? 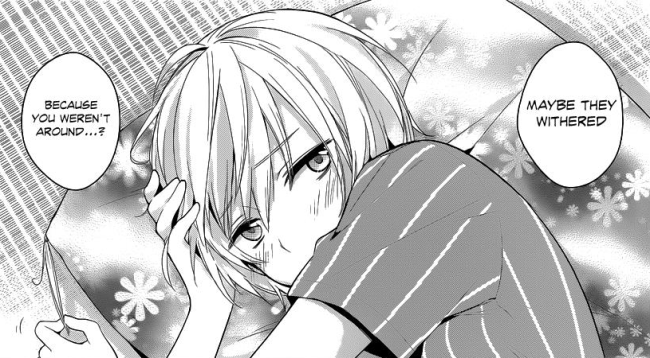 And so I’ve gotten to this point. What do you, reader, think my impression of this manga is? Negative, right? Actually, by the end, I was somewhat fond of it. Despite the lightning pace and the very unlikely ride between unnoticeable male hero to adored male hero, I liked these characters on their own. I liked their chemistry. I liked that they didn’t really have their lives set in stone. More than anything, however, I liked that the story didn’t overindulge itself. Without spoiling everything, I’ll say that what one can expect from this story is not one of lovey-dovey soulmates riding happily ever after, but a painful reality doused in tender affection. An emphasis on memories and living in the moment are highlighted all throughout, though more notably near the end. Instead of using the characters’ jobs as a backdrop, they’re utilized as plot-related conflicts—y’know, because jobs are actually kind of important and take up a lot of time, right, adults? There’s a really trivial scene where the two leads are discussing their schedules while riding on the bus to their homes, and I couldn’t help but note them down and compare them with my own work schedule… because relatable immersion.

I referred to Imaguni-san as a “quick treat,” but this manga really deserves the title more than its predecessor. Some bias applies because I’m more fond of romance than any other genre; still, Itoshi no Karin has just enough to its quick and cliché story to make one’s heart cry “Doki doki” by the bittersweet end. And as bemoaned as I am with sugary-sweet happy endings, I was pleased that this piece kept to a more mature conclusion, though not without some sweet pleasures for the soul.

One last thing: The cover image of Karin is the best art you’ll get from this work. The rest is pretty adequate, though Karin is still pretty nice-looking.